'Life Goes On, Art Goes On' exhibit by Syrian artists to be on display in Geneva 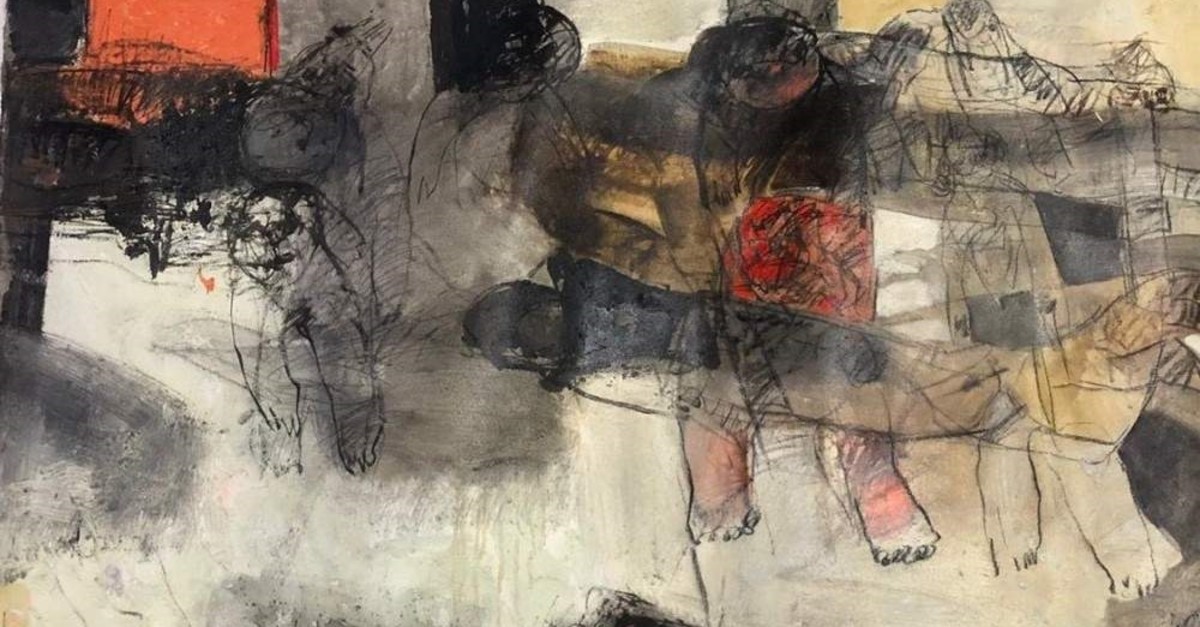 One of the works by Syrian artist Ibrahim Alhassoun that will be displayed at the exhibition.
by Daily Sabah Dec 15, 2019 4:22 pm

An exhibition titled “Life Goes On, Art Goes On,” comprised of works by Syrian artists living in Turkey, will be opened by the Turkish Presidency in line with the first Global Refugee Forum held in Geneva this December.
Turkish harpist Şirin Pancaroğlu and ney player Kaşif Demiröz will perform music at the reception for the First Global Refugee Forum, which will be held at the Palace of Nations, Geneva, on Dec. 17-18, co-chaired by Turkey and co-hosted by the United Nations High Commissioner for Refugees (UNHCR) and the Swiss government.
President Recep Tayyip Erdoğan will co-chair the conference that will be attended by United Nations High Commissioner for Refugees Filippo Grandi and United Nations Secretary-General António Guterres. Furthermore, the two-day event will bring together leaders and prominent players in this area.
Within the framework of the Global Refugee Forum, the Turkish Presidency will open a group exhibition of paintings and photographs by Syrian artists living in Turkey titled “Life Goes On, Art Goes On." All forum participants will have the chance to visit the exhibition which is set to open at the Palace of Nations.
“Life Goes On, Art Goes On” features 14 oil paintings and photographs by artists who graduated from Syria’s leading art academies, including Abdallatif Al Jeemo, Ahmad Abdulwahab Aldulli, Ahmad Raid Mohamad, Aladdin Alhassoun, Imad Habbab, Ibrahim Alhassoun, Khayyam Zedan, Ahmad Muaddamani, Bassam Khabieh, Ghith Beram, Jawad Kurabi, Malek Alrifaii and Noor Hamza.
The two-day global conference is the first gathering regarding the implementation of the Global Compact on Refugees, which the United Nations adopted in New York in December 2018, to take place at a ministerial level. Many leaders, government officials, academics and nongovernmental organization authorities are set to be in attendance.
Given the forum coincides with "Şeb-i Arus” – the date commemorating the death of Mevlana Jalaluddin Rumi – participants will be presented with an informative note highlighting the message of peace and love the Sufi mystic put forth, himself having been forced to flee from Balkh to Konya in the 13th century.
On the same evening, a concert of peshrev music and saz poems will be performed by harpist Şirin Pancaroğlu and ney player Kaşif Demiröz at the reception for the event. Works by Nikriz Peşrev, Nikriz Saz Semai, Nikriz Zeybek, Nihavend Peşrev, Nihavend Saz Semai, Mini Nihavend Peşrevi, Kubbe, Rast Peşrev, Rast Saz Eseri, Pençgâh Saz Semai, Gül Bahçesi, Nim Ferahnâk Peşrev, Buselik Konser Parçası, Buselik Saz Eseri, Buselik Longa and Arpistlere Suzidil will be performed at the reception.
Last Update: Dec 20, 2019 2:23 am
RELATED TOPICS