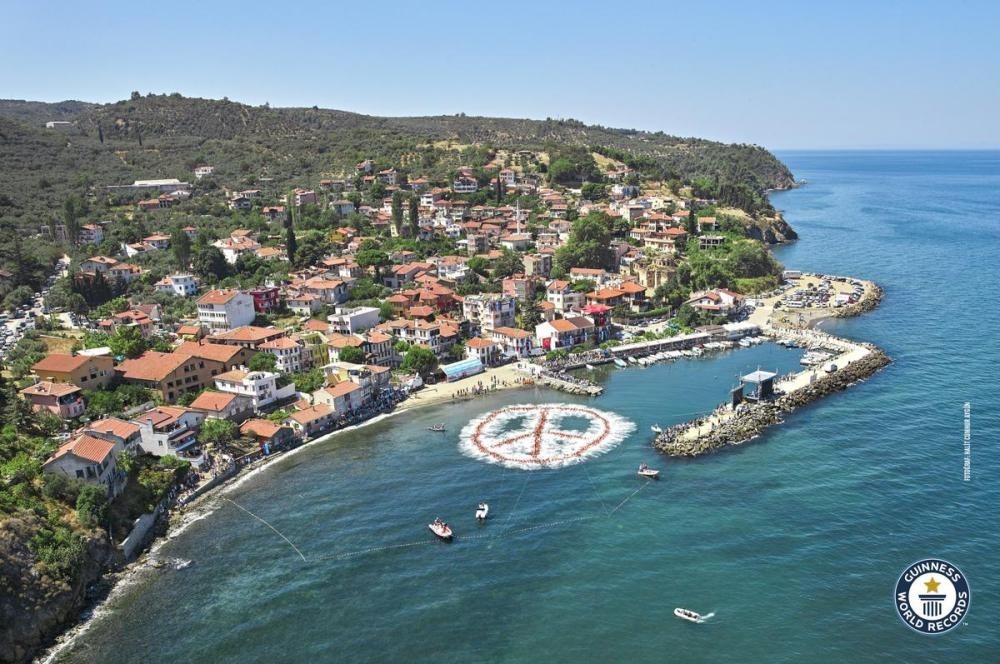 Turkey broke a world record by floating in the Marmara Sea to create the image of a peace symbol.
by Leyla Yvonne Ergil Mar 03, 2017 12:00 am

It should come as no surprise that Turkey, with its vast history and spectacular geography, helps its nationals find success in a variety of interesting and unique categories in the Guinness Book of World Records

Turkey and its citizens hold upwards of 80 records in the Guinness Book of World Records, spanning from historically producing the first coin, the oldest bridge, the first female pilot and even being the first pirates. Now, Turkey continues to top the list with the tallest man, the largest nose and of course, being the largest bread consumers.

Turkey racked up yet another Guinness world record by building the world's largest animated mobile phone mosaic in Barcelona on Wednesday. Furthermore, the phone used for the mosaic was none other than the new Vestel Venus V3 5570 model, which just also happens to be the first smart phone assembled in Turkey. Vestel beat the previous record of 400 phones by using 504 phones to create the world's largest mosaic wall. The 504 mobile phones were assembled side by side to create a wall 3.6 meters wide and 1.9 meters long with each screen used to make a composite image.

However, this isn't the first-time Turkey has won a world record for a mega-sized image. In May of 2015, Turkey broke the record for having the world's "biggest poster." At 4,709 square meters, the poster features the portraits of President Recep Tayyip Erdoğan and former Prime Minister Ahmet Davutoğlu standing side-by-side, made up of thousands of photos from social media. Turkey also holds the record for the "largest floating human logo," when in September of 2015, 460 participants from Bursa's Mudanya broke a world record by floating in the Marmara Sea to create the image of the peace symbol.

In fact, Turkey is strong in the record department when it comes to grand-scale images, winning the world record for the 'largest outdoor exhibition' last year with 130,288 pictures painted by 40,000 children from Turkey and 12 other countries. Turkey also has the record for the "largest painting on ground," which measures 11,965.70 square meters (128,797.72 square feet) and was achieved by 300 students who used 2.5 metric tons of paint to create a picture of the July 15 Martyrs Bridge and an athlete jumping in an event organized by the Youth and Sports Ministry to celebrate the public holiday of Youth and Sports in Turkey.

Turkish cartoonist Erdil Yaşaroğlu also holds the record for the world's "largest single panel cartoon," a new category, which he created by drawing a 10,952,055-square-meter cartoon on the ground in Kırklareli, which is almost the size of two football fields.

Less than two weeks' ago, Turkey's legacy with this global records tracking institutions also made the news when the world's "tallest man alive" at 2.51 meters (8 foot 2.81 inches) a gentleman from Mardin by the name of Sultan Kösen paid a visit to Samoa, which also made him the first Turk ever to step foot on the island. On another note, Sultan Kösen also holds the world record for having the "largest hands" at 28.5 centimeters and the "widest hand span" at 30.48 centimeters (12 inches). 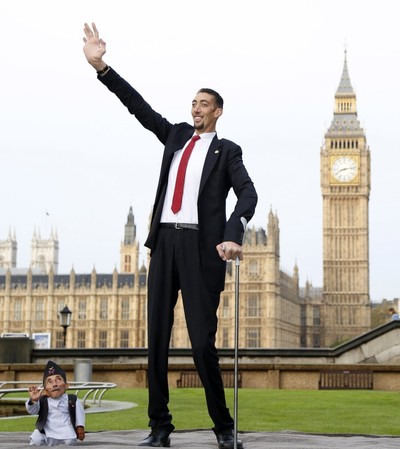 Turkey also holds the title for having the "tallest [female] teenager" in the world with Rümeysa Gelgi who hails from Safranbolu and has a standing height of 213.6 centimeters (7 feet 0.09 inches). Meanwhile, Mehmet Özyürek, a man hailing from Artvin holds the world record for having the "longest nose on a living person" at 8.8 centimeters (3.46 inches), as measured in March of 2010.

As of 2000, the country with the "largest per capita consumption of bread" is Turkey with 199.6 kilograms (440 pounds) per person. Turkish people eat more than three times their own body weight in bread annually. Due to the Turks affinity with doughy carbs, it should come as no surprise that Turkey also holds the record for the "largest serving of pastry," when a whopping 39,550 pastries were made in Bursa divided from a total mega 2,023 meter-long cheese pastry.

Turkey also holds the record for attendance at the "largest full breakfast," when in 2014, 51,793 participants enjoyed a breakfast offered by the Van Chamber of Trade and Commerce. Turkey also holds the record for the largest iftar dinner at multiple venues when 20,715 participants in 81 different cities took part in an iftar dinner organized by Türk Telekomünikasyon A.Ş. in August of 2012.

Turks also hold the record for the world's "largest zeybek dance," when in April of 2011, 702 participants danced in an arrangement of six large circles, each containing five smaller circles within them. Three of the circles consisted entirely of males and three of females for a dance lasting six minutes and three seconds in total. In 2013, The "largest pilates demonstration/class" was achieved by 3,486 participants in an event organized by the Denizli Municipality in 2013.

However, it is in the sport of rowing where a Turk by the name of Erden Eruç has racked up too many records to count, ranging from being the first man to "circumnavigate the globe solo using human power," a record he began in 2007 and completed in 2012. Setting off and returning to a pier in Bodega Bay, California, it took Erden five years, 11 days, 12 hours and 22 minutes to complete his mission, during which he also racked up the record for being the first person to row three oceans, for spending the "most days at sea by a male ocean rower" at 844 days and for successfully completing the "greatest distanced rowed solo on the ocean" at 43,459 kilometers, to name just a few records broken during his epic expedition. 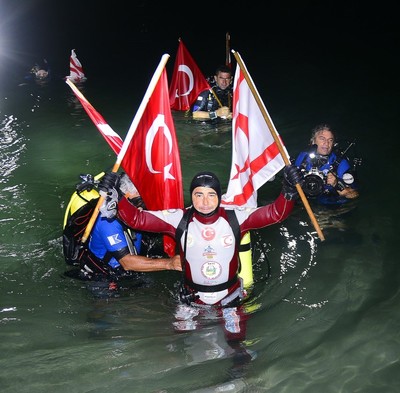 As for records broken by Turks just last year, Cem Karabay, succeeded in recording the "longest open saltwater scuba dive" for males at 142 hours, 42 minutes and 42 seconds. This, however is no the longest time the Turkish diver has spent underwater as in 2011, he broke his own record for "longest scuba dive in a controlled environment," by remaining underwater in a pool in Caddebostan for 192 hours, 19 minutes and 19 seconds with a team of 20 who assisted him in his attempt, during which he spent his time underwater engaging in activities such as online shopping, playing backgammon, receiving massages and even working out on a stationary bike.

A Turk by the name of Alpaslan Durmuş not only has the loudest vocal bass note at 117 dB(C), but also boasts the longest continuous vocal note at 1.52 minutes long, both records that were achieved in February of last year. Last year, a fashion show for the famous Turkish designer Cemil Ipekçi also garnered Turkey the "longest catwalk" record with a walkway set up in the capital's Kent Park Shopping Mall that that measured 2,069.17 minutes (6,788 feet 7.4 inches).

So far this year, Turkey has already racked up another record with Mehmet Kaya breaking a record for preparing the largest number of small skewered meat kebabs, aka çöp şiş, with 180,000 skewers. Mehmet Kaya also holds eating competitions of his skewers in his restaurant in Denizli, which has fast been seeing increased recognition since his record breaking success.
RELATED TOPICS