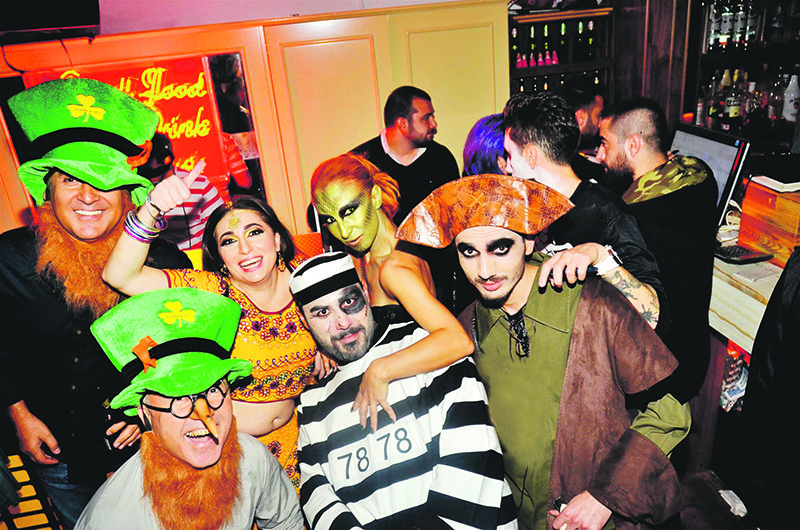 On Friday, April 7, Senem Selimi, Istanbul's very own ‘Party Guru' and the founder of the Facebook group ‘İstanbul Expats & Internationals' will be hosting a very special ‘Red Carpet Party' at The Agency in Levent.

This Friday night, don your best gear to look swanky and step foot on the "red carpet" at "Party Guru" Senem Selimi's "The Red Carpet Party," which will be held this Friday, April 7 at the chic The Agency in Levent.

Set to be a sparkling night, gentlemen are asked to dig through their closets to dust off their suits, while the ladies are instructed to don their fancy dresses for Senem Selimi's "The Red Carpet Party" this Friday night starting at 9 p.m.

Doors will remain open until 2:30 a.m. for this very special party that will have The Agency, located in Levent's İşkuleleri, rolling out the proverbial red carpet and Senem Selimi, Istanbul's very own party guru, will be pulling out all the stops. To top it all off, entrance to this event is free.

The night will start off with a live performance by the lovely and talented Sinem Aydıner & Orkestra, who performs classic international pop songs in her own silky voice. In the later hours, a DJ will be taking over the turntables to get everyone dancing.

Meanwhile, The Agency, a chic restaurant that serves the equally chic plaza crowd and has a menu of international specialties, will also be applying a 15 percent discount for guests of the party. Also, don't forget to bring a business card, because there will be a lottery with a prize by Garage Hair Studio and an award will also be handed out to the night's "best dressed."

The dress code for the event is business and smart casual and while entrance to the party is free, prior registration for the party is mandatory and admission is by guest list only, so check out the Facebook event page to pre-register.

It is not for nothing that Senem Selimi has been given the title of "Party Guru." For the past four years now, her parties have been bringing together Turkey's expat community for a wide variety of events. The Istanbul expats' website Yabangee has also been her sponsor since the very start.

A beautiful and bubbly woman, who has donned many a red carpet herself and been featured in countless magazines covering her parties, Senem is the ultimate party organizer and her events are attended by hundreds.

I had the opportunity to meet and speak with Senem Selimi and was immediately drawn to her energy and intelligence. You can tell she does it for the love and in fact, while she may not promote this fact, much of her proceeds go to help the street cats of Istanbul. An avid animal lover, Sinem is also an experienced and placing equestrian. Certainly a woman to look up to, she is also the founder of the Istanbul Expats and Internationals Facebook group and collaborates with Cihangir… Cool for Cats, an expat Facebook group devoted to assisting street cats.

What started as her throwing her own birthday party, has over the years turned into Senem becoming Istanbul's first party planner, from a professional standpoint, she says, which led to her being given the title of "Party Guru." One of her first events was a Valentine's Day "Lock and Key" party during which she said they had so much fun with women using their key to open locks that were given to the male attendants, that from there her party planning vision just took off.

Her events are covered regularly by the paparazzi press and in fact her first interview on party planning was conducted by Muammer Kapucuoğlu of Klass Magazine, the very person who first referred to her as Istanbul's "Party Guru." Since then, her efforts and parties have been covered in periodicals such as Trendsetter, Star, Şamdan and Hello Magazine.

Over the past four years, Senem has hosted a theme party on a regular basis, approximately once every six weeks, meaning she has organized dozens of parties thus far. While each are attended in the hundreds, her parties are gaining word and continuing to grow in number of guests. For example, her Halloween party, which was held Marjo in Karaköy, resulted in closing down the street with a crowd of 700. But that's nothing she tells me, compared to her party held the previous year at Beyoğlu's The Hall, which pushed the thousand mark in attendance. Her last party, entitled "Joy of Elegance" was held at Alancha in Maçka.

It is a great opportunity to check out different venues in Istanbul as Senem holds each party in a carefully selected new venue. It is also a wonderful opportunity to mingle with the expat crowd and other Turks who have spent long years abroad.

"We need these expat events now more than ever," she tells me as a way for foreigners to be able to mingle and meet in this mega metropolis. So get on your dancing shoes and don your best duds for what will certainly be an elegant and fun event and a chance to walk the "red carpet."

Meanwhile, you can check out Senem Selimi in action in a very special interview series now on YouTube, which she has conducted entitled Istisna Sohbetler, where in each episode she interviews a different guest for a program that is filmed at Istisna Tatlar in Nişantaşı.
Last Update: Apr 02, 2017 1:54 pm
RELATED TOPICS