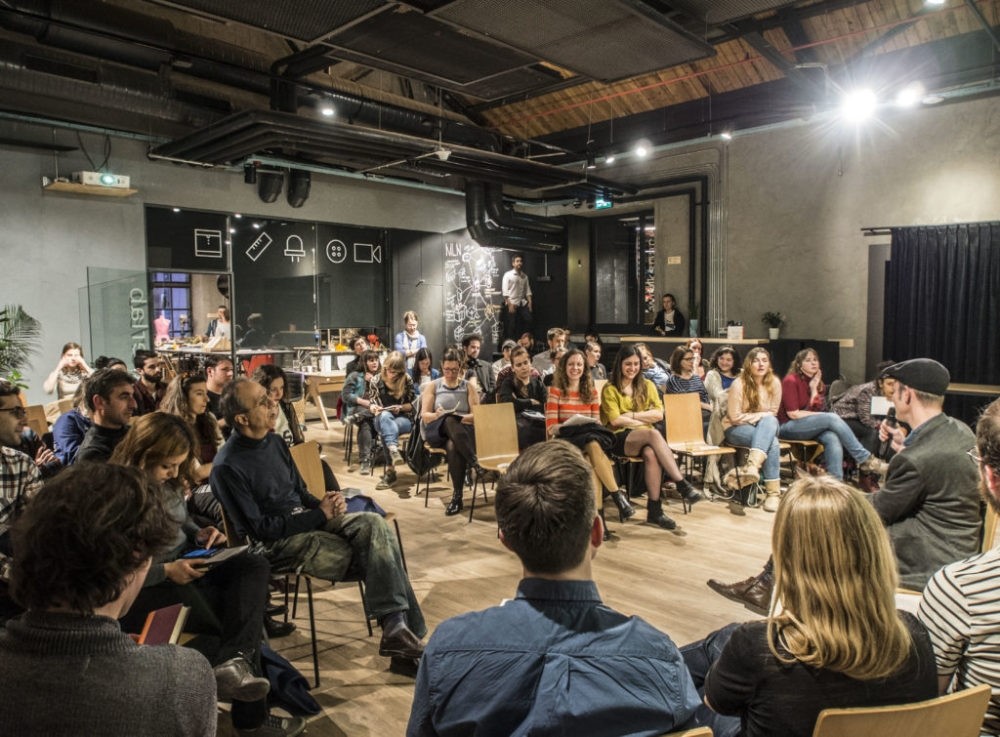 Photo from the previous Spotlight event taken by Sina Opalka.
by Leyla Yvonne Ergil Apr 18, 2017 12:00 am

The new monthly talk series ‘Expat Spotlight,' which showcases innovative contributions being made by Istanbul's diverse international community, returns on Monday, April 24, at ATÖLYE in bomontiada and will be centered on ‘The Arts'

Organized by Yabangee, a website devoted to expat life and activities in Istanbul, the new monthly talk series, Expat Spotlight, showcases a half dozen expats who share their inspiring contributions to their community here in Turkey. This is an opportunity to learn about the wide variety of areas foreigners residing in Istanbul have ventured into, as well as what has inspired them. Additionally, it is also an opportunity to meet, mingle and network with other expats and locals alike in one of the most innovative platforms in the city, which also just happens to host ATÖLYE, the creative co-working venue in bomontiada

Each talk is based on a different theme showcasing the freshest, most inspiring contributions being made by Istanbul's diverse international community to the city's cultural, sporting, humanitarian and business spheres.

The first talk in the series focused on expats involved in "health" related work and the last series, which was held on March 21, was on "writing." Taking place on Monday, April 24 from 7 p.m. to 10 p.m., the third talk will be focused on "the arts." This event is free, and there is no need to RSVP. The doors will open at 7 p.m., and the event will begin shortly after at 7:30 p.m. "An opportunity to share moving stories, reflect on personal experiences and participate in a resourceful dialogue, we invite foreigners and locals alike to come and embolden others," writes Yabangee, the event organizers, and the expat-heavy team, behind the website geared towards informing foreigners residing in Istanbul of events and activities as well as offering advice and entertaining stories about being an expat in Turkey.

The Master of Ceremonies for the evening will be Joey Leskin. A lifestyle and travel writer who moved here from London, he is also a very active contributor of Yabangee. The lineup of speakers are as follows:

Anna Zizlsperger is an editor, writer and curator from Germany who relocated to Istanbul from London in 2011. In 2012, she founded the independent non-profit Istanbul-based art magazine Exhibist, which is currently the only English-language print publication focusing on modern and contemporary art from Turkey with an international distribution. Now in its 11th edition, and with an informative website to boot, Exhibist also shares reviews of exhibitions and provides information on upcoming art-related events in addition to showcasing Turkish artists.

Merve Çağlar is the founding director of SAHA, a unique philanthropic private funding mechanism for art from Turkey established in 2011. SAHA aims to provide access to funding opportunities and a healthy and resourceful body for the support of contemporary cultural practices in Turkey. Merve, who previously served as the director of Galerist and was the founding editor of the Galerist Newspaper, which was later relaunched as ArtUnlimited, also co-hosts a weekly live radio program where she conducts interviews with artists, curators, critics and art professionals.

Diana Page is a painter, inter-disciplinary artist, and an accomplice to creative collaboration from Cape Town, South Africa. Living and working in Istanbul since 2006, she now calls it home. Her work in painting, drawing and performance embraces an awareness of shifting urban landscapes and geographies. From her studio in Çayırbaşı, Diana also hosts an online creative drawing course, "Drawing with the Wondering Artist" which creates trans-border conversations around creativity, bringing together voices as a way of animating cities.

A Syrian photographer and media artist, Omar Berakdar originally graduated as a chemist and later went on to study media art history in Austria. He was born and raised in Damascus and moved to Istanbul in 2012. Since then, he has been active in cultural and art-related activities, such as being the co-founder of Hamish "Syrian Cultural House" in 2013, and then in 2014 initiating Arthere, as known as "arthereistanbul," where he works in the management team.

Arthereistanbul is an art platform and cafe located in Kadıköy's Yeldeğirmeni neighborhood. Run by artists for artists, it is a space where artists can work, promote and sell their artwork directly. It also hosts artistic events, such as film screenings, installations, performances, workshops and exhibitions.

Claire Fondain, who originally hails from the West of France, is passionate about writing, photography and her domain of art management. She is a permanent team member of Arthere, the art platform, café and website. She arrived in Turkey in 2015. After following a variety of art projects and years of organizing art-related events for cultural associations in France, she became involved with Arthere, while simultaneously working on her own documentary film project.

Markus Lehto is the co-founder of Joint Idea, a co-working and innovation space devoted to turning the "work life" into "life's work." Hailing from Canada, Markus has been instrumental in the vast expansion of Joint Idea from its hub in Arnavütköy to its venue in Kanyon.

The Yabangee team will also be hosting a very special Yabangee camping retreat for its readers from May 12 to May 14. In addition to camping out in a tent, over the weekend, there will be barbecues, music, games and various activities. Where the event will take place is being kept secret, with details only to be released to confirmed attendees, however the idea is to keep it near the city, around an hour or less, and accessible by public transport.