Hıdırellez festivities kick off in Turkey 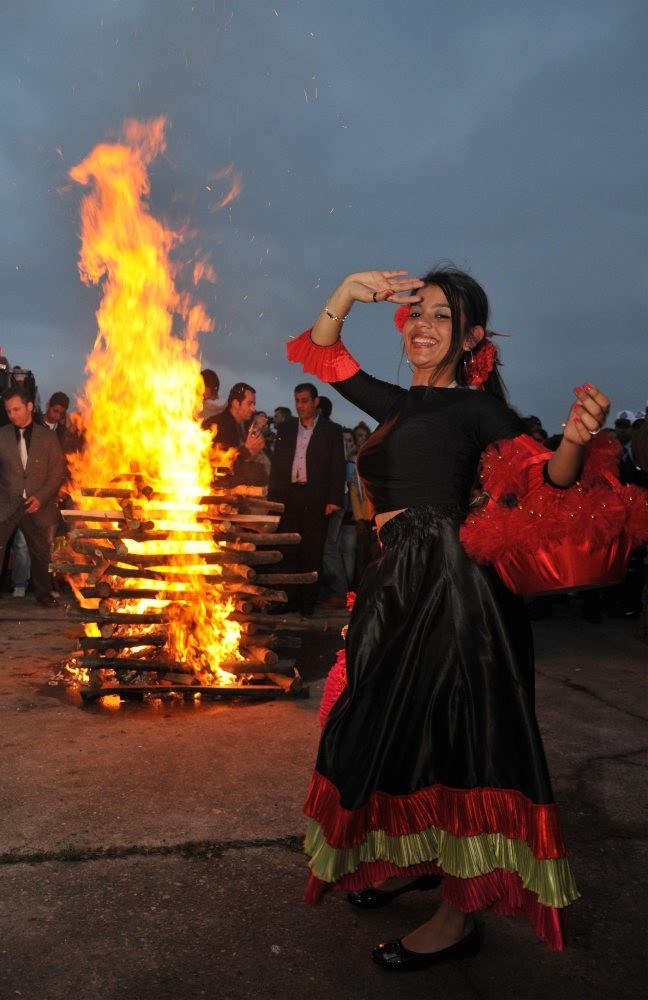 Hıdırellez is a celebration that marks the arrival of spring. It is observed throughout Central Asia and the Turkic world as well as in Turkey on the eve of May 5

This Friday, Turkey, and countries in Central Asia and the Balkans, will be celebrating Hıdırellez, a holiday to usher in the spring and harvest and thus, abundance. The history of this celebration spans back to the belief that one day a year the Prophets Hızır (Al-Khidr), associated with spring, rebirth and granting wishes, and Ilyas (Elijah), who is believed to bring rain, meet on the earth creating an envelope of time, over the eve of May 5 to May 6 in which the wishes of those deserving may be granted.

Turkey's most colorful holiday, Hıdırellez is filled with rituals, traditions and celebrations of such uniqueness that it is also a candidate for UNESCO's list of intangible cultural heritage. Just some of those traditions include cleaning the house from top to bottom to ensure Hızır pays a visit as he is believed not to visit homes that aren't clean. Wishes are written on pieces of paper and sent into the sea for Hızır or placed on a "wishing tree," preferably a rose tree and people jump over a bonfire in the belief it will bring good health or at worse pardon them from their previous errors. Nonetheless, in practice, this holiday is a celebration of the gypsy Romani culture in Turkey, their rituals, superstitions and making wishes.

The most famous celebration of Hıdırellez in Turkey, takes place in Edirne and more specifically in Sarayiçi, the historic remains of the private hunting grounds built for Ottoman sultans that now serves as the spectacular stadium of sorts for Turkey's biggest oil wrestling bouts as well as for the annual celebration of Kakava as it is referred to in this heavily Romani populated region. An all-night event, beginning Friday and ending with the tradition of visiting the neighboring Tunca River for rituals such as washing one's face in the water and sending off to the sea handwritten notes of wishes to be granted on the eve.

Celebrating Hıdırellez in the neighborhood of Ahırkapı has become a steadfast tradition for many an Istanbullu ever since the first one was held in 2000. Tonight's celebrations start at 7 p.m. as thousands will come out to hang out in the neighborhood's Keresteci Hakkı Sokak and Şadırvan Sokak for this lively and free event that will have wandering musicians, lots of spontaneous dancing as well as jumping over bonfires. Organized by the Ahırkapı Müzisyenler Derneği, this is a wonderful opportunity to experience the Romani cultural influence in music in this colorful and historically heavily Romani populated neighborhood.

The Kadıköy Kent Konseyi has organized a full day of events for Hıdırellez this year. The day begins with a seminar on the historical and cultural practices of Hıdırellez, which will begin on Friday, May 5 at 1 p.m. and will be held at the Barış Manço Cultural Center. Speaking will be European Roman Rights Turkey Observer Hacer Foggo, Music Researcher and Teacher Hale Yılancıoğlu Biçer, Avcılar Rumeli Balkan Women's Association Chairman Gülten Yarbasan and Bi' Sanat Academy Culture and Arts Assistant Özlem Kurtuluş.

The evening's festivities for Hıdırellez will take place at Moda's Yoğurtçu Park from 5 p.m. to 10 p.m. on Friday, May 5. This free event will start off with an opening address and street musicians followed by a performance by the popular alternative-indie group Ahmet Beyler. Grup Cemre, who perform ethnic Ottoman music with traditional instruments such as the bağlama, bouzouki and ney. Next will be the Dilek Turan Roman Ekibi, Koro Bi'Sanat (Çok Sesli Balkan Şarkıları), and closing will be hip-hop and rap artists Tahribad-ı İsyan.

The Şişli Municipality will be hosting a Hıdırellez celebration at Maçka Park, aka Nişantaşı Sanat Parkı from 4 p.m. to 11 p.m. on Friday, May 5. There will be musical performances, DJs, dancing and a wide variety of fun activities and games for children and adults, including a rhythm workshop for the kids.

On the evening of Friday, May 5, Hıdırellez celebrations organized by the Izmir Municipality will be held along the Kordon with a very special performance by worldwide renowned percussion master Burhan Öçal and Trakya All Stars held at Gündoğdu Square at 9 p.m.

Another İzmir tradition is to walk through the Tenekeli neighborhood, which transforms on Hıdırellez into a carnival-like atmosphere with streets lit up with lights, music, dancing and of course, the beloved bonfire.

Parc Ceremonie in İzmir's Güzelbahçe, will be hosting a special Hıdırellez event on Friday, May 5 from 7 p.m.to midnight on which its luscious grassy grounds will host Romanı bands, a spring cortege, DJ performances. Dance shows, a wishing tree, traditional rituals fire jump and street food. Tickets cost TL 56 and are available on Biletix.

Urban Picnic with food from around the world

On Friday, May 5 and Saturday, May 6, the Uniq open-air stage, located in the magnificent arts & culture, entertainment and business center of Uniq Istanbul in Maslak, will be transformed into Turkey's first-ever nighttime picnic grounds. This urban picnic, done Istanbul-style of course, means that between 6 p.m. and 1 a.m. 40 different restaurants will be offering up treats from around the world for a gastronomic extravaganza that will include Italian, Far East, Mexican and French cuisine in addition to Turkish street food classics. There will also be burgers, vegetarian options, desserts and coffee, all of which is unlimited after the entrance fee of TL 125 ($35) for one night or TL 200 for both.

Some of the food that will be offered during the two evenings are deli sandwiches by 86'd Deli Sandwiches, Iranian food by Asuman, sliders from Butcha Butcher Shop & Steakhouse, köfte, sucuk, bi'tost's delicious grilled sandwiches, as well as Don Pablo's quesadillas and burritos. There will be Turkish classics, such as Develei, Fasuli and Ficcin, while Fotini and Frankie will be bringing on the style. Crepe & Fondue will be breaching new boundaries and Baylan will be offering desserts. There will also be trilece and coffee by Coffee Sapiens to name just a few of the delicious treats that will be available in the stands.

In addition, there will also be performances by the Urban Picnic Orchestra on Friday night and the popular alternative-pop group Pinhani on Saturday. In the meantime, DJs will be playing music before, after and in-between the events.