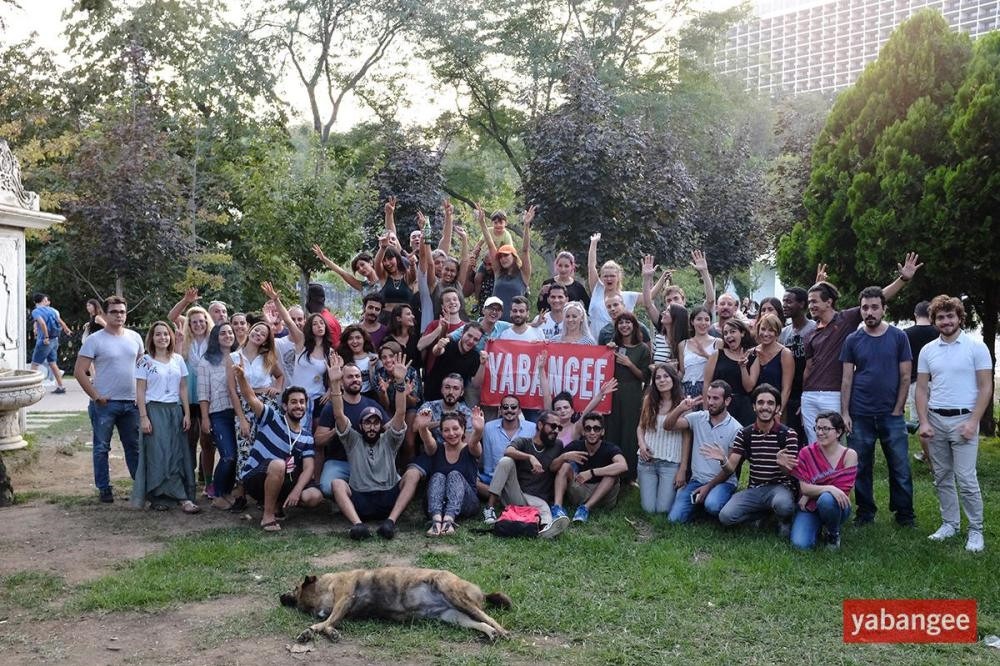 A group photo from one of the previous events by Yabangee taken by Colin Craig.
by Leyla Yvonne Ergil Sep 22, 2017 12:00 am

Yabangee, Turkey's leading expat community based in Istanbul, is set to organize a number of events in İzmir as well as Istanbul to welcome new expats to the country

Yabangee, the expat-geared website that informs Istanbul foreigners of events and activities as well as contains reviews and informative articles, has been increasingly branching out into hosting their own event series. Coming up this week, Yabangee will be hosting a string of events in Istanbul and in Izmir, the largest city in Turkey's Aegean region, to usher in the end of summer and to welcome newcomers to the country.

"We are indeed expanding to include Izmir in our content and community events. One of our long-term volunteer contributors Cansu Pelin İşbilen moved there after working on the Istanbul section for several years. When she was there, she kept meeting foreigners, but felt there was no real community resource for them and that the events were a bit scattered or inauthentic. As she knew how we operated here, she offered to try and network with writers and photographers there to build some useful content on Izmir," explains Tarik, adding, "In Istanbul, we had a lot of content on the site before we started to invite people to community events. In Izmir, we're sort of doing the reverse. Behind the scenes we're working to have enough content to launch in a meaningful fashion, but we're hosting some events to meet people and generate a bit of buzz in the meantime."Therefore, Yabangee will be hosting the following two events this weekend in Izmir's Alsancak neighborhood. Both events are free to attend and will be a great opportunity to get to know Izmir's expat community. 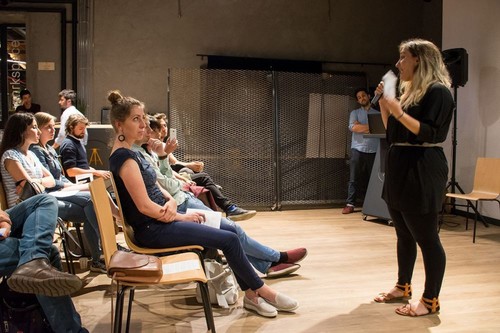 A photo showing Sarah Khalbie giving a talk about the Istanbul & I Community at an Expat Spotlight event taken by Zeyad Abouzeid.

Sept. 23- Welcome to Izmir: A Get Together Party by Yabangee The first event to take place in Izmir this weekend is the "Welcome to Izmir: A Get Together Party by Yabangee," held on Saturday, Sept. 23, on the first floor of İZ Performance, a live music and art venue, which will take place from 9 p.m. to 2 a.m. Essentially an extension of an event series Yabangee hosts in Istanbul, the objective, Tarik tells me, is to find a location that's reasonably priced, uniquely stylish, and that the average foreigner hasn't visited previously. "We start the night with some mingling, icebreaker games so people can get to know each other if they want, and then as it gets late, we bring out the DJ to turn things up a bit and let people dance," said Tarik.

On Sunday, Sept. 24, from 3 p.m. to 6 p.m., Yabangee will be hosting an Izmir Seaside Potluck Style Picnic. In other words, everyone attending is encouraged to bring or make something to share with other attendees. The picnic will take place on the grassy seaside of Alsancak and the exact location will be announced on the day of on the event's Facebook page. You can also add in the comments what you plan on bringing or check out the event's ongoing list. "Lots of snacking, chatting, playing volleyball, football, playing guitar, etc. are all part of the experience," explains Tarik.

Sept. 26- Expat Spotlight #5: Istanbul as HomeOn Tuesday, Sept. 26, Yabangee will resume their monthly talk series "Expat Spotlight," held at and in conjunction with ATÖLYE, located at bomontiada. Each talk series aims to showcase the innovative and inspiring contributions being made by Istanbul's diverse international community to the city's cultural, sporting, humanitarian and business spheres. This fifth edition of Expat Spotlight will be centered on the theme of "Istanbul as Home" and six expats will be given the opportunity to share moving stories, reflect on personal experiences and participate in a resourceful dialogue with foreigners in the city and locals alike. The event is held in English, entrance is free, it will begin at 7:30 p.m., with doors opening at 7 p.m. and there is no need to RSVP to join.

"September generally sees so many new arrivals to Turkey in the form of students, teachers, recent graduates, etc. and so we get a lot questions and meet so many new people. We wanted this month's event to reach out to newcomers from all walks of life, but also to resonate with those of us who have lived here for years. Thus, we're very honored to host speakers who will cover environmentally conscious living, student life and resources, the experiences of women in Istanbul, the various legal rights foreigners have here, the changing culture of the city over the years, the perspective of a displaced person, and much more," shares Tarik.

The speakers at the upcoming Expat Spotlight will be:

Jenny Molendyk-Divleli, a Canadian that has been living in Istanbul with her family for the last six years. Trained as a sign language interpreter with a degree in linguistics, after moving to Istanbul she opened Early Bird English, which offers immersion and play-based language classes for children. In addition to being closely involved with the Syrian community in the Pendik municipality, she also has been working toward integrating a zero waste lifestyle in her home.

Anna İlhan is the chairwoman of the International Women of Istanbul (IWI) and has been residing in Turkey since 2012. Originally from America, she worked two decades in the petroleum industry in all aspects of oil and gas operations and global business development before leaving that life behind. Currently, she is a part of a new European tech startup focused on sustainable fashion.

Melek Barngrover is a lawyer, former chemist and travel enthusiast. She writes on legal matters of interest to expats in Turkey, such as work permits, setting up businesses, and marriage.

Špela Grošelj is from Slovenia and she moved to Istanbul in the fall of 2013. She came to pursue her PhD on Turkish art. Soon after landing in the city she started to discover Istanbul and began sharing her Istanbul experience on her blog and as a contributor for Yabangee and also became a volunteer at Istanbul&I.

Lars Larsson is a part-Swedish, part-British, part-Turkish, life-long expat, who came to Istanbul in 2006. Since then he has traveled extensively in the country and the wider region, started a business, and is about to get married in Adapazari next month.

Amer Arab is a Palestinian refugee from Syria who decided to come to Turkey to continue his education in computer science in 2004 and then worked for many high-profile tech companies like Zynga, Yemeksepeti and Peak Games. But since the war in Syria, he has been working as an interpreter for many international bodies and organizations that help refugees.

Sept. 30- Int'l Boat Party: Welcome to Istanbul by Yabangee and Ritim On Saturday, Sept. 30, Yabangee takes to the sea with a classic style party held in conjunction with Ritim, a popular music venue, on a boat cruising the Bosporus. The boat will pick up passengers from Kabataş and Kadıköy at approximately 9 p.m. and the party will go on until 2 a.m. There will be multiple DJs on different floors offering a variety of music genres. Early bird tickets are available until Sept. 28 for TL 40 ($11), while entrance will be TL 50 at the door. Keep in mind there will also be a gender balance enforced at the door, so try to come in pairs.

"It's going to be a big celebration and we're hoping to reach out to newcomers especially, as a Bosporus boat party is a really quintessential experience to have in Istanbul," said Tarik.