Ballad for Syria: A story about music, Maisa and love 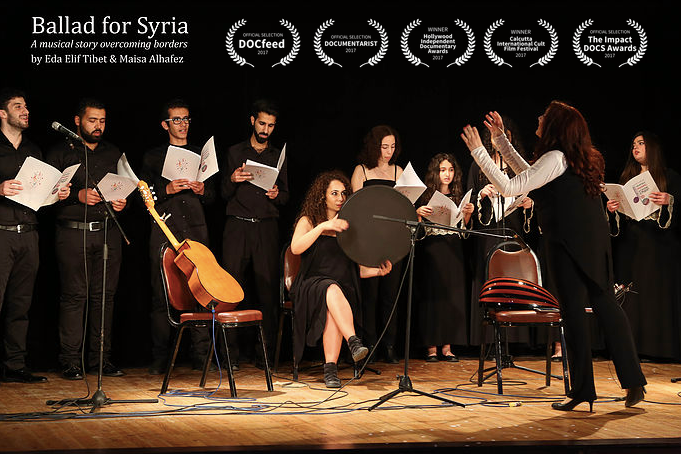 'Ballad for Syria' is a musical documentary that reflects the life of Maisa Alhafez, a musician from Syria who founded the Istanbul Mosaic Oriental Choir, and this captivating feature-length documentary filmed in Turkey has been making its way around the global festival circuit and will be screened in Istanbul on Nov. 22 at Impact Hub

As a ballad narrates poetic stories in short stanzas, "Ballad for Syria" is a self-reflective documentary filmed by Maisa Alhafez and Eda Elif Tibet, that tells the story of Maisa, a refugee from Syria and the many characters that she shares her journey with in the Istanbul Mosaic Oriental Choir, which she is both the founder and conductor of. The Istanbul Mosaic Oriental Choir is a multicultural choir that sings for peace in a wide variety of languages and for fundraisers and events to raise awareness for peace building and rehabilitation. Maisa is also the founder of the project "Tomorrow is Better," a registered NGO that she organizes with her fiancé Mohammad Diwana, which is based in the Netherlands.

Through "Tomorrow is Better," a project that began by Maisa playing music for Syrian children in the parks of Istanbul, after which she would gift them with boxes of clothes and toys she collected from her music students and friends, which has since grown exponentially with volunteers in the dozens, Maisa was also able to realize the First Talent Festival for Syrian children in Istanbul earlier this month.

The feature-length documentary "Ballad for Syria" gives the viewer a glimpse into the inspirational life of Maisa Alhafez, a music teacher and former banker from Damascus with degrees in economy and from the musical conservatory, who has been residing in Istanbul, separated from her loved ones for the past four years. While her main instrument is the piano, she can be seen playing guitar and singing songs in a wide variety of languages along with a number of captivating characters that are also displaced in Istanbul and share this connection and support through their music.

Speaking with Maisa, she tells me, "I wanted to use music to make a difference," however not in any political or religious sense, "we simply sing for peace," she says. The choir began three years ago as she began to meet musicians from different countries, albeit mostly from Syria, because "that is where I am from," she tells me. There are both professionals and amateur musicians, from countries such as Syria, Algeria, Egypt, Russia and Turkey and the only constant is that there are no fixed members. Members come and go, as is the very nature of being foreigners and expats who reside in different countries. However, Maisa says, "This is a positive thing by both giving color to the choir and in sharing the feeling of family with new members. Everyone adds something, making it more like a mosaic." Under the "Tomorrow is Better" umbrella, Maisa plans to start up new mosaic choirs in other countries as well, starting with Holland and eventually hopefully Greece, she tells me.

"Wherever I go will try to form the Mosaic Choir. While Istanbul gave me so much and provided the perfect atmosphere for such a project, because it is so very colorful and has this great mix between east and west, still with the mosaic concept this choir, which uses music as a form of therapy to heal especially from the experience of war, works like a key to peace, which is the very message from the film that we wanted to share," explains Maisa.

"Ballad for Syria" is Maisa Alhafez's first autobiographical documentary, which was filmed with co-director Eda Elif Tibet, an independent documentary filmmaker and anthropologist from Istanbul, who has shot a number of award-winning films that have made the international festival circuit. "Ballad for Syria," described as "a musical story overcoming borders," came about from Eda's deep friendship with Maisa Alhafez and her following the rehearsals and performances of the Istanbul Mosaic Choir.

The film delves into Maisa's own personal story and her longing for her loved ones as she tries to make a place for herself in the world of the displaced. Her family still in Syria, Maisa's true love and fiancé migrated to the Netherlands. As of the current EU-Turkey border regime, for them to unite is very challenging. And so, not giving up, Maisa works hard for her vision to transform the borders by building the multicultural community that is "The Istanbul Mosaic Oriental Choir," a diverse family that sings together, in which she believes through music and love one can heal the wounds of her people and children.This 47-minute film has the viewer laughing and crying, singing and dancing. It has already racked up an Award of Recognition by the Hollywood Independent Documentary Film Festival in May 2017as well as received an Outstanding Achievement Award for Free Speech by the Calcutta International Cult Film Festival. It was also an official selection at DOCUMENTARIST, a festival held last June in Istanbul, where the film made its debut in Turkey as well as at DOCfeed in Eindhoven, Italy's Impact DOCS Awards and Roma Cinema Doc and the Largo Film Festival. The list goes on and on. Maisa and her choir have also traveled the world, visiting the Netherlands, the largest refugee camp in Greece and speaking at the U.N. last July, where she talked about the film "Ballad for Syria," the Istanbul Mosaic Oriental Choir and the Tomorrow is Better NGO. In February, the film will also be screened at the U.N. headquarters. While they have gotten a number of invitations to screen the film all over the world, one of the most exciting, Maisa shares, will be its showing at the Hollywood Film Festival next March.

Those in Istanbul however can catch a very special screening of "Ballad for Syria," as well as an interactive musical performance and talk by Maisa Alhafez on Wednesday, Nov. 22 at Impact Hub Istanbul, a co-working and co-creation space, located in the Levent Sanayi in Kağıthane. The event will take place from 7:30 p.m. to 10:30 p.m. and is free, however attendants must pre-register on Eventbrite. Visit www.balladforsyria.com for more info about the film or to volunteer for Tomorrow is Better.