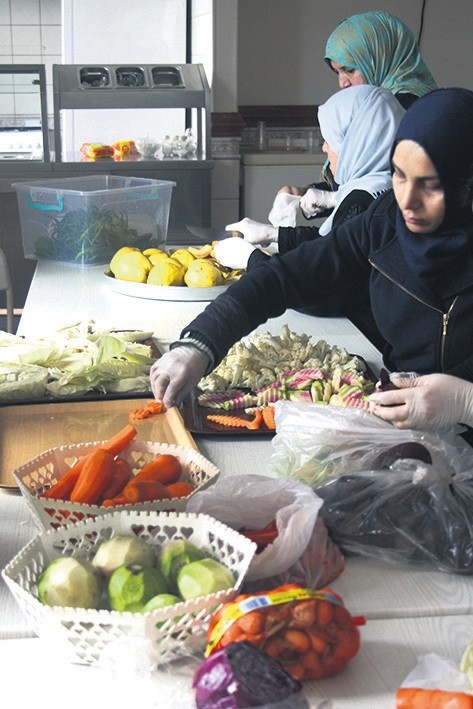 The Women to Women Refugee Kitchen will open its doors this Sunday, Dec. 17, at their new location in Okmeydanı with a special opening event 1 p.m. to 5 p.m.

The Women to Women Refugee Kitchen, in Turkish "Kadın Kadına Mülteci Mutfağı," which operates under the umbrella of the Okmeydanı Social Aid and Solidarity Association (OKDER), was born from the solidarity that developed among 15 women, many of which are Syrian refugees, who prepare and sell jams and pickles as a means to earn an income. With their new space they also hope to expand the catering side of their business as well as organize workshops and courses for refugees and children.

It all started with the founding of OKDER in 2014, a small-scale neighborhood association which allowed for Turkish and Syrian women, who had escaped the civil war in Syria, to earn an income over the past year by preparing preserves and pickles. The establishment of their new location is the fruition of a common vision by the community, refugees and volunteers, which aimed to ensure the women in the community were able to rebuild their lives together with their neighbors, without any discrimination and to assist Syrian women refugees and ensure that their children have the opportunity to get an education.

I had the opportunity to catch up with the women behind the Women to Women Refugee Kitchen and asked them how it all started. They told me that for a year now, they had been saying "we wish we had our own place instead of preparing the jams in three or five different homes." Now, however, this dream has come true and they have their own kitchen as a result of what they describe as a true story of solidarity. "Just the thought of how the support of volunteers, foundations and even people in different countries led to our now having our own real kitchen is one that excites us and gives us hope," they told me.

There are both Turkish and Syrian women in the association, 17 of which are currently employed in the preparing of jams. However, they hope this figure will increase after the kitchen's opening. As for this Sunday's special event to celebrate the opening of the association's very own kitchen, there will be festivities, small snacks and treats, music and even a dance performance taking place between 1 p.m. to 5 p.m.

The ladies behind the Women to Women Refugee Kitchen also shared with me their plans to expand the catering side of their business. They have been working on establishing a catering menu for the past week they tell me as well as have been testing out the different ways they can offer catering services to different numbers. Last year they catered for a number of meetings they explained to me serving up traditional Syrian food from a variety of regions as well as Turkish foods and other snack items. "We haven't yet tried out other cuisines, however, that is something that could be next in line. Because now, we have our own kitchen," they exclaimed in glee.

I asked the ladies behind the Women to Women Refugee Kitchen whether there were any expats or other foreigners involved in their project to which they said, "Yes," adding that their doors are open to all volunteers. I asked what ways, if any, people could help, to which they said they could always use support in the way of providing materials, whether it be toys for children, stationary or materials for art classes and workshops, which is something they also hope to embark upon in the future.

"People could choose to use our catering services or they could get in contact with us to share with us their knowledge in catering services. Or, they could teach us how to prepare dishes from other cuisines we have no knowledge of. They could allow us to display our preserves at different markets or assist us in transporting the preserves we have prepared to the cafes in which we serve them to." They have even received donations over the internet, which is another suggestion they made, explaining that obtaining fruit, sugar and even jars are items that are obviously crucial in preparing their preserves.

"Just last week, a friend from Dubai sent us 30 kilos of apples, which we made sour apple jam out of. In the summer, another friend of ours invited us to their garden of fruit trees and we collected our own plums and made preserves out of them," they explained.

I asked these impressive and inspirational ladies if there was anything else they wanted to add, leading up to this new chapter in their lives to which they said, "We need to internalize the fact that we are neighbors to people whose lives have been halted because they were forced to break away due to civil war. Because we all live in this city together, we are in fact neighbors. Sometimes we share poverty and in other times hope, however, most of all what we share is our lives together."

They continued: "We listen to each other's woes, sometimes as we prepare our preserves, the conversations lead to memories and at times even music. Because we all come from different areas in Syria, the food we prepare can differ sometimes, as can our perspectives on certain issues," they added.

"But as we continue to be together in this city, our families are also growing. Our neighbors in Okmeydanı and our volunteer friends as well as others who have helped us from far away cities such as Ankara, Mersin and Eskişehir, where we have never been before and with whom we have never met, yet all together we are trying to establish a new life and we want to thank everyone from the bottom of our hearts for not leaving their neighbors on their own."