Learn, volunteer, feast or laugh, expats do it all 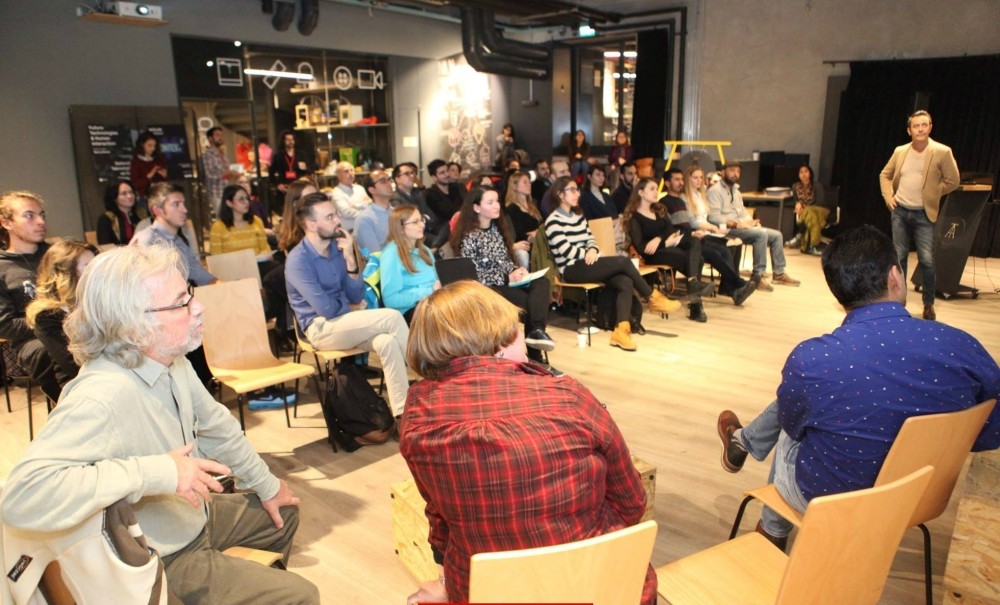 Photo taken by Ru00fczgar Kalkan during a previous Expat Spotlight event at ATu00d6LYE.
by Leyla Yvonne Ergil Jan 12, 2018 12:00 am

Coming up this weekend and in the days to come are a number of intriguing events hosted by and of particular interest to expats. Whether you want to learn about experiences in education from Istanbul's expats, dine with others at a special pop-up dinner, volunteer or try your hand at stand-up, check out what's going on in town this week to get you out there and at the very least mingling with others.

Expat Spotlight to talk about education

Expat Spotlight is a monthly talk series spearheaded by Yabangee and held at ATÖLYE, which showcases the innovative contributions being made by Istanbul's diverse international community to the city's cultural, sporting, humanitarian, and business spheres. On Tuesday, Jan. 16 will be the ninth edition and centered on the theme of "Education." There will be five speakers all of which are expats involved in education and the event allows the opportunity for sharing moving stories, reflecting on personal experiences and participating in a resourceful dialogue, we invite foreigners and locals alike to come and embolden others.

Yabangee is a website devoted to informing expats of upcoming and ongoing events in Istanbul as well as organizes a series of expat-interest events such as quiz nights and the upcoming Expat Spotlight, which is held in collaboration with ATÖLYE, a multidisciplinary innovation platform and performance venue, located in bomontiada.

The speakers at this month's event will be Sheri Cavazos as Master of Ceremonies, who has taught for over a decade in Russia, Portugal and Istanbul. Born in Italy, Milena Rampoldi is a bicultural writer and translator who also founded and is the editor-in-chief of the portal ProMosaik, promoting interreligious and intercultural dialogue. Moving to Istanbul in 2011 from Portland, Chris McLaren serves as program manager for a Turkish NGO dedicated to helping those displaced by conflict in the Middle East and North Africa region rebuild their lives, primarily focusing on education and livelihood.

Karen Van Drie is a librarian who works for Işık Okulları where students can use their library to read and research in five languages. She serves on the international board of the brand-new, Global Literature in Libraries movement working to get more translated literature into English-language libraries, and chairs their International School Committee. She also manages two international book clubs operating in Istanbul: the Global Minds Book Club and Istanbook. Based in Istanbul, the Global Minds Book Club is for people from around the world to read and discuss books from around the world, while Istanbook is a reading group for foreign and Turkish women living in Istanbul. In addition to her captivating blog "Empty Nest Expat," she has also spearheaded @EnSonNeOkudun on Twitter.

The event, which takes place in English, begins at 7:30 p.m., with doors opening at 7 p.m. and there is no need to RSVP to attend.

A duo of festive feasts by Pop-Up Dinners Istanbul

Going into its fifth year, Pop-Up Dinners Istanbul is run by a multicultural expat born in Singapore, who came to Turkey over two decades ago from England and opens up her home in Cihangir to a select number of expat-heavy guests who get to experience her specially-prepared scrumptious menus of global cuisine.

This Saturday, Jan. 13, will be "Warming Up Winter," a meal centered around chili peppers with dishes from Singapore, India and a pavlova for dessert. The following Saturday, Jan. 20, Pop-Up Dinners in Istanbul will return with a very special murder-mystery themed night entitled "Murder in the Kasbah." Guests are asked to dress up as the character they choose to play and enjoy a Middle Eastern feast as they figure out the night's mystery. Guaranteed to be a gathering of a wide spectrum of nationalities and an opportunity to meet other foreigners residing in the city, the dinners start at 8:30 p.m. but you must reserve a spot through the Facebook page because this popular dinner series tends to fill up fast.

Istanbul&I is an international youth community dedicated to making a social impact that has grown exponentially over the past year. In addition to holding regular Turkish, English, Arabic and French speaking clubs and holding fundraisers for refugees, they also organize a wide arrange of events such as their culture talk series, which has tackled topics such as Maronites, Yalda, Islamophobia and even Christmas and ÇayTalks, which are also theme-based meetings on topics such as "intelligence" and "digital and social anxiety."

On Saturday, Jan. 13, they will be opening their doors at their center in Tophane from 2 p.m. to 4:30 p.m. for anyone interested in learning more about what they do and volunteering in social impact projects and programs.

Last, but certainly not least, if you want to cap off the week with a good time and lots of laughter, check out the Take Me Up the Bosphorus crew's English-language stand-up comedy open mike night, which will be taking place this Sunday, Jan. 14 at Kaset Kadıköy in Moda. Entrance is free, the sign-up begins at 7 p.m. for those who want to perform and the show will start at 7:30.