All about Börek and the best places for it in Istanbul 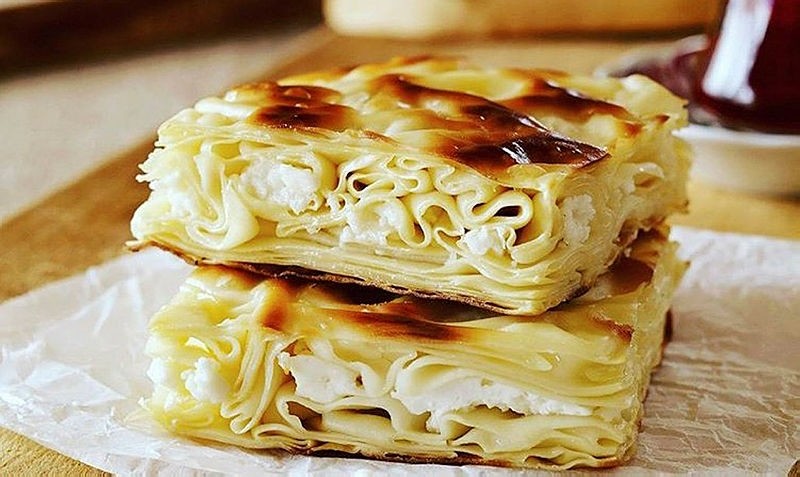 Börek is one of the most traditional pastry dishes that is still enjoyed widely today throughout Turkey, so use the following guide to the best variations out there and where to enjoy them

Börek refers to a family of pastries generally prepared using the paper-sheet thin dough known as phyllo or in Turkish, yufka. Considered to have been invented in the homeland of wheat and what is now modern Turkey, there are references to this method of layering sheets of dough to prepare pastries that date back to a hundred years B.C., making it one of the region's most ancient culinary traditions. Börek was popular throughout the reign of the Ottoman Empire and continues to be a staple in Turkish cuisine today.

The main types of Börek

Su Böreği is in a league of its own not only in its preparation style in which thin sheets of hand-rolled dough are boiled before being baked but also in the wide affinity for this particular version evident in its widespread availability. Traditionally layered with a mixture of feta cheese, parsley and ample butter, su böreği is served in lasagna-style slices.

Kol Böreği is another widely popular style of börek that is made from puff pastry and shaped into a spiral that is cut up into slices of long rolls. Kol böreği comes filled with a variety of ingredients, most traditionally cheese, spinach, potato and the beloved minced meat version which includes currants and pine nuts.

Boşnak Böreği is quite similar to kol böreği, except the rolls tend to be thinner and traditionally stuffed with a mixture of both cheese and spinach, they are also prepared in minced meat and potato varieties.

Gul Böreği is also shaped in a spiral, but this time in single-serving size that is shaped like a rose. It is prepared with phyllo dough and stuffed with the four most popular fillings, which are feta cheese, spinach, potato and minced meat.

Kalem Böreği or Sigara Böreği is a smaller, serving-size cylindrical version in which traditionally feta cheese and parsley are rolled up in a triangle shaped piece of phyllo dough which is then fried.

Pacanga Böreği and Avcılar Böreği are also rectangular serving-sized fried pastries in which the former is filled with pastırma and kaşar cheese and the latter is filled with a minced meat mixture and coated in a batter and breaded.

Talash Böreği is considered in a league of its own and is a fortunate find in restaurants. In this case, square-shaped pastry is stuffed with a medley of cubed lamb and peas.

Çiğ Börek is another widely popular pastry variety, especially among Turkey's Tatar community with restaurants devoted solely to preparing minced meat and cheese versions of what is similar to a savory stuffed and deep fried semicircular shaped turnover.

Tepsi Böreği refers to a type of börek traditionally homemade in which a wide variety of ingredients are filled between layers of phyllo dough brushed with butter, egg, sometimes milk and even yogurt that is baked and then cut into square slices

Küt Böreği or Kurdish Börek is a sweet pastry that consists of dozens of paper-thin layers of phyllo lathered in butter and powdered sugar and baked to be golden and crispy.

Where to get the best börek in town

As the name implies, Aslı Börek are devoted to dishing up some of the most amazing su böreği that ever was. A must-stop to try this pastry variation in its ultimate form, and in cheese, spinach and minced meat varieties, therefore, it is lucky that they have dozens of branches all over the country. You can even purchase trays of börek for takeout, as well as boxes of their delicious stuffed grape vine leaves, which if I do say so myself, make for the perfect accompaniment.

Serving up börek since 1895, the Meşhur Sarıyer Börekçisi, is as its name suggests, is famous for the kol böreği variety of this pastry that has become an iconic food from this neighborhood which conveniently hugs the Bosporus. Their minced meat version, which includes pine nuts and currants, has become a symbolic pastry of Sariyer and well worth the trek. Plus they also serve the highly coveted and harder to find sweet kut börek.

Çengelköy Börekcisi is a favorite in the quaint neighborhood of the same name lining the Asian side of the Bosporus that also boasts one of the most popular tea gardens in Turkey by the name of the Tarihi Çınaraltı Çay Bahçesi. The two make for the perfect combination of picking up pastries to enjoy while having tea with a spectacular view of the Bosporus. They also have branches in Ortaköy and Kanlıca and they serve a wide variety of böreks ranging from su böreği, kol böreği, kalem böreği and even kut böreği, however, their specialty is a cheese and onion and cheese and walnut tray börek variation they make using whole grain wheat.

With locations in Etiler and Karaköy, Boşnjak Mutfak is one of the most happening eateries of late to dine on traditional Bosnian classics including their signature böreks on stylish rustic wood furniture seating. They have potato, spinach, cheese and even zucchini böreks as well as their version of mantı which more resembles a pastry.

Also located in Sariyer, Kireçburnu Fırını has been operating since the 1950's and serves a wide variety of böreks such as su böreği, as well as a mushroom variation, kol böreği and even gül böreği.

Another serious contender in the Sariyer district is the Tarihi Bilice Börekçisi, which dishes up kol böreği in variations including raisin and chicken in addition to the traditional su böreği.

Serving up börek since the 1930's, Tarihi Yeniköy Börekçisi is another steadfast location situated by the sea that serves traditional kol böreği as well as a wide variety of pastries.

Last, but certainly not least is Karaköy Güllüoğlu. While they are renowned worldwide for their baklava, their su böreği, which comes in cheese, spinach and minced meat varieties, also deserves an honorable mention.