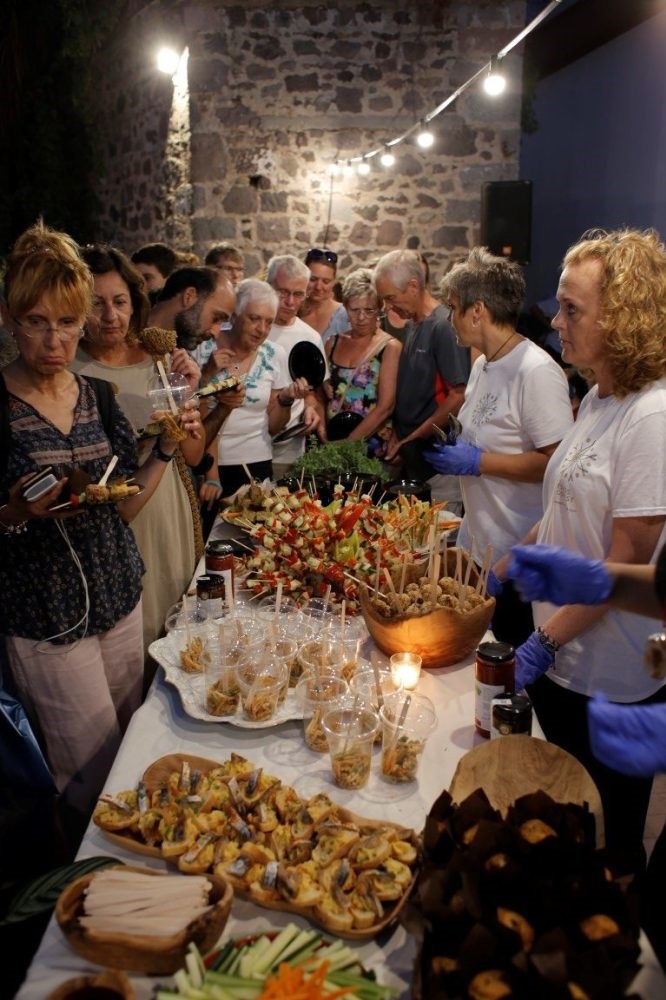 Starting this week, the Greek island of Lesvos, which is located just off Turkey's Ayvalik coast, will be celebrating and promoting their regional cuisine in a two-week festival that will be taking place in different towns all over the island

The Greek island of Lesvos, referred to as Midilli in Turkey and as Mytilene by some in reference to the island's capital, is one of the most enjoyable islands to visit. At 1,600 square-kilometers, Lesvos is the third largest of the Greek islands, it boasts a 320-kilometer coastline and has been named a global geopark of the United Nations Educational, Scientific and Cultural Organization (UNESCO) and was once the birthplace of the ancient poet Sappho.

In fact, the islands history and how its culinary traditions were embedded with the Byzantine and Ottoman cultures that once conquered them will be a highlight at the festival that celebrates the island's cuisine. The event makes for a great opportunity to discover the island that neighbors Turkey's Aegean coast.The Lesvos Food Fest 2018 will take place in towns throughout the island over a 10-day period from Thursday, July 5 to Sunday, July 15. This will be the second Lesvos Food Fest, started up last year with the mission of promoting the cuisine, culinary traditions and regional products of the island, while also highlighting the geographical and cultural uniqueness of each location. You see, the Lesvos Food Fest will be taking place all over the island, with events scheduled in the towns Lafiona on July 5, Skala Kallonis on July 6, in Eressos from July 7 to July 8, Pappados on July 9, the capital Mytilene on July 10, then in Agia Paraskevi on July 11. The festival will be in Petra on July 14 and will be moving to Molyvos from July 12 to July 15.

The events planned for the festival are as follows:

On Thursday, July 7, the festival kicks off in Lafiona, a mountainous town located in the northern part of the island that is famed for its panoramic views of the Aegean. The local Cultural Association Agios Alexandros will be introducing "Trahana," a dried mixture derived from the fermentation of grains, yogurt or milk, which anyone familiar with Turkish cuisine could easily recognize as "Tarhana" deemed the oldest instant soup in history. This will be an opportunity to try the cup-shaped version of the dish that prevails on the island. The event will be taking place at the Agis Paraskevi Church starting at 7 p.m.On Friday, July 6, the festival moves to the central west part of Lesvos and the fishing village of Skala Kallonis. The day will start off with a boat ride of the Gulf of Kallonis, which is also known as "The Lake of Aristotle," which will set sail at 9:30 a.m. The focus will be on savory and seafood dishes and there will be a demonstration of the salting process used for fish. In the evening, the festival will be taking over Skala Kallonis Square for a very special cooking presentation at 7:30 p.m. by chefs Charis Katrakazas and Charilaos Theodorellis, followed by an evening of traditional music and dance. 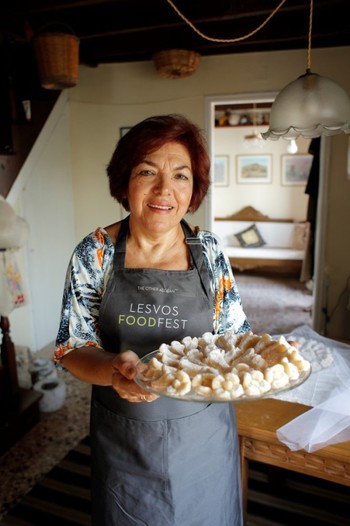 Local housewives will hold workshops on traditional tastes at the Lesvos Food Fest 2018.

Over the weekend on July 7 to July 8, the Lesvos Food Fest will head west to Eressos, one of the island's most popular holiday destinations. The Eressos Tourism Association will be organizing a weekend focusing on culinary traditions spanning the past to the present coupled by the beloved Greek musical melodies.

On Saturday, 6:30 p.m., the festival heads to the village of Eressos, where chef Elias Mamalakis will prepare haute cuisine dishes utilizing the regions famed figs and will be joined by the Eressos Cultural Association in preparing "Petimezi" aka "Vrasma." Those in Turkey, however, may be more familiar with the term Pekmez for this sweet syrup, which in this case is derived from local figs.

On Sunday, the festival will be taking a blast to the past with the playing of nostalgic songs on guitar, while festival-goers enjoy snacking on watermelon and tasting the local "touloumotyri" cheese, which in its preparation method is nearly identical to Turkey's beloved "tulum" cheese. Meanwhile on the sidelines, local restaurants will be dishing up a very special "Eressos-style" breakfast and chef Eleni Psichouli and food writer-cook Ioanna Stamoulou will be preparing dishes utilizing local products that will be served on the famous "floating platforms" of Skala Eressos.

On Monday, July 9, the festival heads south to Gera, where there will be an open-air market in which local producers will be introducing local products at tastings held at Modοusa in Durahani, Pappados and Gera.On Tuesday, July 10, the festival heads east to the island's capital of Mytilene for a special book and art bookstore introduction. Starting at 8 p.m., chef-author Kostis Kostakis will be bringing recipes to life from his book on homemade Greek pies and pastries. On Wednesday, July 11, The Museum of Industrial Olive Oil Production in Agia Paraskevi, will be hosting an "Olive Oil Cooking" class, which will combine tradition with modern gastronomic trends and will begin at 7:00 p.m.

On Thursday and Friday, the festival moves to Molyvos, certainly one of the most frequented holiday destinations on the island. Starting at 10 a.m., there will be cooking workshops for children, in which they will prepare homemade noodles referred to as "Mamalelia" and a fried dough specialty that is called "Koulikia." From 10 a.m. to 1:00 p.m., there will be a trip to the Ottoman Hamam in Molyvos, in which the University of the Aegean' Cultural Technology and Communication Department will be at hand to discuss the herbs and salts that were used for health purposes.

On Thursday starting at 8 p.m., there will be a cheese tasting in Lefkonikos Square and on the evening of Friday, starting at 6 p.m., local housewives will be offering workshops in their neighborhood courtyards on traditional tastes such as stuffed onions, octopus, squash blossoms and grape vines.

On Saturday, July 14, there will be another cooking workshop for children at Lefkonikos Square starting at 10 a.m., in which participants will prepare fried bread stuffed with local cheese and homemade loukouma, which we in Turkey now as "lokma," followed by a trip to the hamam to learn more about medicinal herbs and salts.

On Saturday, July 14, the festival will also be in Petra with food tastings of local and special pastry confectionary ceremonial treats, held in the courtyards of local homes starting at 6:30 p.m. In the evening, the festival heads to the beach for a fun "1960s theme" party frequented by actor Renos Haralambidis as a lead up to the filming of his next movie "About Time," a Hollywood production that will be filmed on the island of Lesvos in autumn.

The 10-day food journey will come to an end on Sunday, July 15 with a morning cookout at the camping site led by local scout teams that will begin at 10 a.m. and a street food tasting event at 8 p.m. with a Greek version of the popular British dish, "fish and chips." Then, the Molyvos Harbor will become a nostalgic feast for the senses by night with music played at a wide number of venues by local groups and musicians.