Expats on a mission to keep Turkey clean 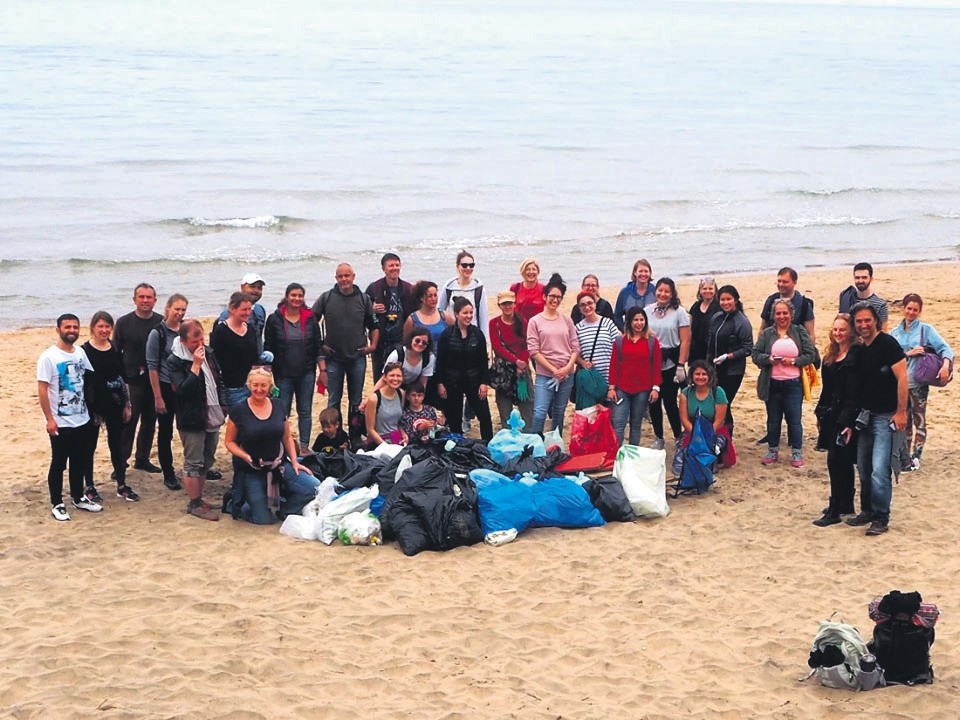 Members of Tidy Turkey during one of their events on Istanbul's coast.
by Leyla Yvonne Ergil Aug 17, 2018 12:00 am

Tidy Turkey, Eco Istanbul and Eco Kalkan are all expat-initiated efforts that hold cleanup events where like-minded and environmental-friendly individuals can come together and help make Turkey cleaner

Tidy Turkey, or in Turkish "Türkiye'yi Temizle," is an organization that hosts gatherings in which people come together to clean up litter, thereby beautifying their surroundings while having fun and meeting new people at the same time. In addition to its Facebook page, where cleanup events are listed, Tidy Turkey also has a blog where each cleanup event is documented.I had the opportunity to catch up with Lucy Tooze, the expat behind the project Tidy Turkey, which has been gaining popularity with Istanbul residents and the expat crowd and asked her how it all began.

Initiated by Lucy, a well-travelled Australian who has lived in Istanbul on and off for the past three years, the first Tidy Turkey event was held with a small group of people gathering for World Cleanup Day last year. "I had become despairing at the litter and rubbish I found in every place of natural beauty I visited here," she explained. "I am a beach and sea person and thought rather than just complain about it, I'd see if I could gather some like-minded souls and do something," so she advertised on Internations and gathered some friends and thus the first event was held in Burgazada and documented on their blog as Cleanup Day 2017.

So far Tidy Turkey has held eight different events. Members can also create their own events, such as the cleanup event held just this week called "Crash the Trash" where people gathered to collect litter left along the shore of Moda. Two women, one Iranian and one Turkish, who are in a Bostancı swimming club and had made a shocking video of the trash they have to navigate through whilst training, spearheaded this particular event.

All events are documented on the blog at https://turkiyeyitemizle.wordpress.com/ and have also included meeting up at a dog shelter in Istanbul and a gathering on the Princes' Island's Kınalıada. Lucy's entertaining commentary and reviews of the events are not only inspiring but captivating as well. "As more Turks have become involved I am intending to get someone to translate the content and upgrade the site for better SEO and more extensive platform coverage," Lucy said.

The Facebook page Tidy Turkey has been up and properly functioning since mid-June and is focused on announcing cleanups days primarily. I asked Lucy how many people join the events on average to which she said that they once had as little as eight, however as people began hearing about the cleanup events, the numbers have grown and continue to do so. "The last event had about 40-50 people, and a mixture of Turks and foreigners, which is good to see as initially it was really only us 'yabancees,'" Lucy tells me, adding that "many more signed up but as usual on the day you get maybe only 50 percent or less who actually make it."

Other events have been held in conjunction with like-minded organizations such as a cleanup held in Şile with Eco Istanbul, another environmental group started up by an expat to create awareness around environmental issues. The most important item on the agenda for all of these groups at the moment is the upcoming World Cleanup Day, held on September 15 every year.

Tidy Turkey plans to hold an extensive event on the day, which will take place simultaneously in destinations throughout Turkey. While planning is currently in process, Lucy aims to involve as many locals as possible and has been in touch with schools and universities. "The sites are yet to be determined, but the idea is that each group will choose their own desired location and collaborate and coordinate with our group," Lucy explains, adding that the probable sites for Istanbul are Büyükada, and Burgazada, the Üsküdar shore and Belgrade Forest, while other locations around Turkey such as Ayvalık and Bursa will also be joining in.

"We are also hoping some dive teams will be collecting rubbish underwater around the Princes' Islands, Şile and Fethiye," she said.Tidy Turkey also joins forces on organizing and promoting cleanup events held with other environmental-friendly organizations, such as a successful event held in Ayvalık with TEMA and in Şile with Eco Istanbul. Started by British expat Jodie Harburt, who has been living in Turkey for nearly three decades now, Eco Istanbul (in Turkish it is Çevreci Istanbul), began in May. In addition to hosting cleanup events, Jodie's intention is also to spread awareness about not creating litter in the first place. Speaking with Jodie about the upcoming World Cleanup Day, she told me that they will be encouraging members of the group or anyone to initiate their own cleanup events by simply picking up trash wherever they are and then document it to share their success with fellow group members.

Jodie tells me that Eco Istanbul was formed in conjunction with Eco Kalkan, a more extensive project in Fethiye started by an expat which involves not only informing individuals, but also locals restaurants and businesses of ways to help the environment by reducing the amount of single-use plastics and separating waste for recycling and offering certification they can display denoting that they exert ecologically sound practices.

An honorable mention must also be made of expat Mick Scarsbrook, whose initiative, "Keep Turkey Clean" (Türkiye'yi Temiz Tutalım) and YouTube videos documenting environmental public information have been vital in bringing to light the issue of unnecessary litter.