What's on the stands this winter: Seasonal fruit and vegetables 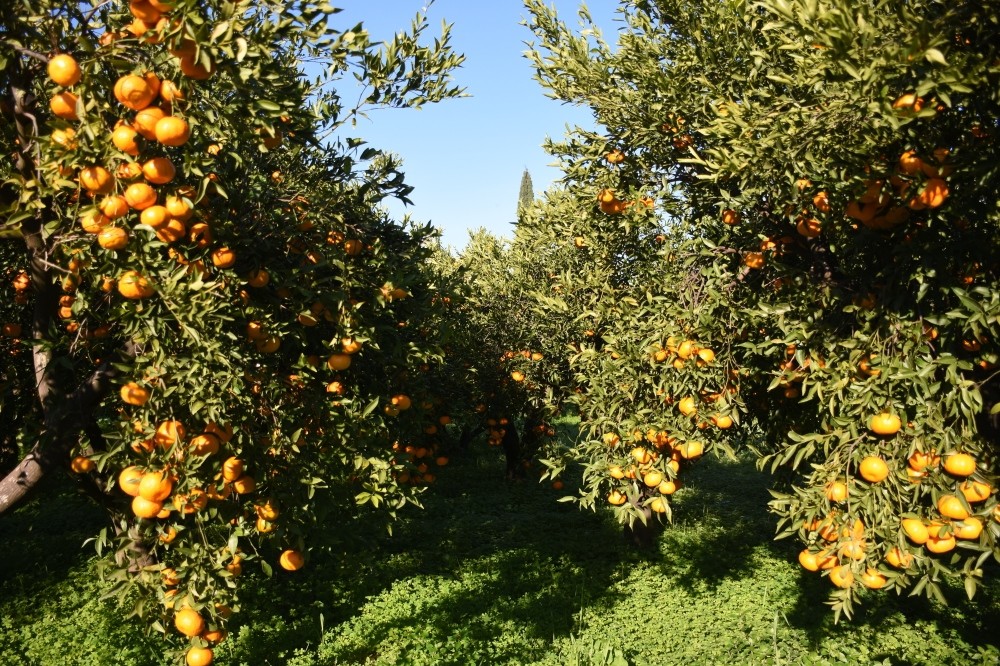 Winter means the market is full of new fruits and vegetables with which we can make wonders in the kitchen. Winter fruits and veggies are so important for Turks that they celebrate Bodrum's famous mandarins with a festival

In Turkey, eating seasonally is an integral part of its elaborate and exquisite cuisine. Vegetables and fruits are consumed based on the times of the year they are harvested with many also attributed to special traditions and dishes. While some produce may be familiar, there are other lesser-known veggies and fruits that will be popping up on the stalls during the winter months. The following is a guide to what fruits and veggies are available and treasured during this season and how to enjoy them at their best!

What winter lacks in fruit varieties it makes up for with the wide selection vegetables and savory fruits. Pumpkin, referred to as "balkabağı," is definitely an iconic fruit of the winter season, and in Turkey it is prepared in both savory dishes such as pumpkin soup as well as in desserts, namely as the "pumpkin dessert."

Getting to the roots

While healthy veggies such as broccoli and cauliflower also abound during winter months, it is the wonderful selection of root vegetables that takes center stage on farmer's market stalls. Beets, aka pancar and celeriac, known as "kereviz" become widely available and the lesser known Jerusalem artichoke, referred to as "yer elması," also surfaces. If you are wondering, the latter is traditionally prepared in a stew-like dish with carrots and rice.

The star of the season is the radish, however, and referred to as "turp" in Turkish. There is a wide variety of this spicy vegetable, which comes in a medley of colors and sizes. Starting from the hazelnut-sized radishes, referred to as "fındık," radishes vary in size and in color here ranging from black, white and red varieties. Meanwhile, purple carrots referred to as "cazgır" are an especially visibly appealing treats to decorate the plate in winter.

One of the most exciting elements of the winter market is the vast array of wild greens that are available. Turks are fortunate to be familiar with a number of nutritional wild greens that are consumed regularly when available. It is regular practice to blanch greens for salads or boil them and then coat them with lemon juice and olive oil, or yogurt with garlic. Different greens are incorporated into "börek" pastries, and there are even traditional dishes where greens are also sautéed with eggs.

While chard, which in Turkish is "pazı," and nettles, referred to as "ısırgan," are some of the more recognizable greens, there are a number out there that you may have difficulty discerning. Mallow is referred to as "ebegümeci" and is another popular green consumed in the winter months in a traditional tomato-based dish with rice.

"Kazayağı" is a popular green in Turkey that is referred to as pigweed and shouldn't be confused with the wild green "kuzu kulağı," which in English is known as sorrel as the latter can definitely take on more sour notes.

Wild coriander, referred to as "yabani kişniş" and wild asparagus, which is called "tilkişen" or "kuşkonmaz" in Turkish, are some of the more sought-after and special finds of the colder months. Interestingly, it is the latter that is traditionally prepared with a scrambled egg. The golden thistle, referred to as "şevketibostan" and "kenker," is certainly one of the most intimidating of the greens as it has a strong white stalk and leaves that seem like they were grown on a whole other planet.

Admittedly, winter pales in comparison to the bountiful summer months when it comes to fruits; however, where the selection may lack in this season, it makes up for it by producing some of the most vitamin-filled and tasty fruits Turkey has to offer.

First and foremost, there are pomegranates, aka "nar," in both red and white varieties that are popular to consume and gift around the turning of the new year as they are believed to bring prosperity. In fact, there is also a custom of crushing a pomegranate in front of the door, which is believed to bring luck in the new year. So, don't be shocked or offended if suddenly that pomegranate you gifted is thrown on the ground in a fist of fury.

Bergamot, as it is also called in Turkish, is like an overgrown and distorted cousin of the lemon and orange citrus varieties. Slightly green and mostly yellow, they are huge and mainly consumed in jams or as teas and not as a fruit to just bite into, so beware.

One of the rarest fruits to surface this month is "muşmula," which in English is medlar. Admittedly not the most attractive of fruits as they resemble tiny pomegranates with a brown shell that looks as if the fruit is past its time. The reason being is that they must be consumed at an overly ripe stage, which makes it look as if the fruit is rotten. Nonetheless, medlars are definitely worth giving a try as they have been consumed in these regions since Roman times.

The star fruit for the winter months is undoubtedly the beloved mandarin and citrus varieties. The best mandarins are said to come from Bodrum, and they start off being called Satsuma, which has a characteristic aroma and is still green when picked that when left to ripen, are then referred to solely as Bodrum "mandalina." Clementines, as they are also referred to in Turkey, come in at a close second as the most popular type of mandarin to enjoy in winter.

The Bitez district of Turkey's top holiday destination Bodrum, is known for its vast number of orange groves and in fact has its own ice cream chain, which has exploded due to their utilization of local fruits in their flavors, the most popular of which is not surprisingly mandarin. This weekend, from Dec. 29 to 30, the town of Bitez will be celebrating the fruit that put the town's name on the map at the Bodrum Mandarin Harvest Festival. Taking place in the center of town from 9 a.m. to 8 p.m., there will be a chance to visit orange groves and pick mandarins off of trees and to listen to a number of expert speakers discuss topics such as the history of mandarins in Bodrum. In addition to local musicians performing and traditional dance shows, there will also be a screening of a Chinese-filmed documentary that focuses solely on Bodrum's famous fruit.