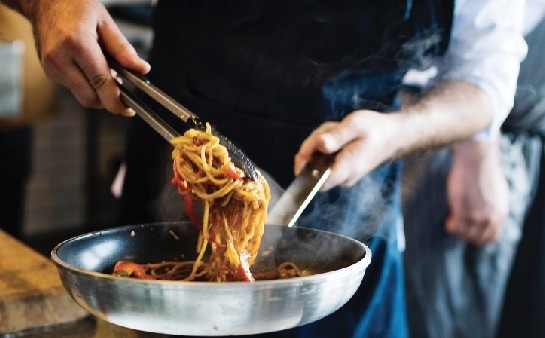 Turkish chefs bring a breath of fresh air to the world culinary arts by blending the rich cuisine of Turkey with the finest of world cuisines.
by Leyla Yvonne Ergil Jan 11, 2019 12:00 am

Istanbul's fine dining scene is being revolutionized to embrace Turkish cuisine in new perspectives. There are a number of master chefs receiving international accolades for their innovation and talent in bringing Turkish food to the forefront of global cuisine. Luckily, they also have a number of excellent restaurants making a buzz in Istanbul, where you can enjoy some of the best food in the world.

The founder and executive chef of Nicole, which just last month made the prestigious "La Lista" of the top restaurants in the world, Aylin Yazıcıoğlu is one of if not the most well-known female Turkish chef in recent years. Her restaurant Nicole is one of the fanciest in town, featuring haute cuisine and set atop the Tom Tom Suites in Beyoğlu across from the Italian Consulate with a spectacular views of the Bosporus and Sultanahmet. Interestingly, Yazıcıoğlu was a researcher at Cambridge University in Social History when she chose to follow her passion for cooking and went on to study at the Le Cordon Bleu culinary school in Paris. Her cuisine melds Turkish ingredients with French techniques and the restaurant's menu changes seasonally.

Turkey's most recognized chef, Mehmet Gürs was actually born to a Turkish father and Swedish-Finnish mother. Trained in the U.S., Gürs brought proper American and Italian classics to his multiple restaurants in Istanbul, pleasing many an expat. In a league of his own, in total he has 19 successful restaurants, including the NumNum chain, Trattoria Enzo, Terra Kitchen and even the Kronotrop specialty coffee store. But, he is famed for his masterpiece Mikla, which sits atop The Marmara Pera Hotel in Tepebaşı. Mikla was number 44 on the "The World's 50 Best Restaurants" list for 2018, which they also dubbed dining "with the best views in the world." Gürs also shares his knowledge and research of Turkish culinary traditions and heritage in a series of interesting and educational YouTube videos.

Definitely one of the most popular and well-known chefs to come out of Istanbul in recent years for taking a modern twist on Turkish cuisine, Maksut Aşkar is the chef behind Neolokal, a restaurant in Salt Galata with spectacular views of the Golden Horn. Aşkar also has a cooking show on 24 Kitchen. His culinary background includes ventures such as Nupera and the prestigious Hillside Club chain and has served as consultant for the menus at Hillside Beach Club Fethiye, Sofa Otel and the paparazzi magnet Bodrum Maça Kızı Otel. His own restaurants have included Multi, LilBitz and then Sekiz Istanbul. But it his Neolokal, which just celebrated the fourth year anniversary of its opening by hosting nearly a dozen celebrity chefs from around the world, which Aşkar works on most often. Neolokal has also made "The World's 50 Best Restaurants" discovery series list. Every dish at Neolokal looks like a piece of art, as Aşkar, hailed a visionary and an artist himself, has also held exhibitions of edible art.

Hailing from Turkey's culinary capital of Gaziantep, Musa Dağdeviren has been "moving mountains" as his surname translates, in introducing a wide array of traditional regional dishes from all over the country to Istanbullites and expats delight. His restaurant Çiya Sofrası offers its own unique style of affordable and casual dining. You pick and choose from hot specialties and the best salad bar in town to then fight for a spot at one of their many tables as they now have two restaurants across from one another on the same street in Kadıköy. Dağdeviren was featured in the recent Netflix series "Chef's Table" season five, and he is referred to as a "food anthropologist" and his restaurant a "memory kitchen."

With the restaurants opened by this talented team you get two for the price of one, in terms of innovation that is. Together, just last month they opened the restaurant Batard in Bomonti, which dishes up comfort food classics with fine dining elements in a bistro-like setting. Their previous venture Zula Istanbul, which is located in Harbiye, is more casual yet deemed by most to be the best burger in town. Which shouldn't come as a surprise as together they have a long history of creating a culinary synthesis at some of the best restaurants in Turkey. Argos in Cappadocia, Mimolette, Gile, Tabla Alaçatı and Nuteras are just some. Cihan Kıpçak, who also serves as Spago's executive chef, was even part of the catering team alongside Wolfgang Puck at the 90th Academy Awards that took place in March last year.

You may know him from his fame gained at the Çirağan's Tuğra Restaurant and at the neighboring Feriye in Ortaköy, as well as Nar and Surplus, located in the historical center of Istanbul, but established chef Vedat Başaran has a newer venture entitled Tershane Karaköy, which opened last year on the top floor of the Hotel Momento in the now-hip neighborhood of Karaköy. This seasoned chef is known for dishing up impeccable Ottoman and Turkish classics, which he has also served in such esteemed venues as Buckingham Palace and the White House.

One of the most well-known female chefs in Turkey, Didem Şenol returned to Istanbul from studying at the French Culinary Institute in New York to revolutionize Turkish fine dining with her famous Lokanta Maya in its heyday and went on to open Gram. She now operates Kanyon Lokanta and Kanyon Corner in Levent and Orjin Lokanta in Maslak. Through her Gram website, she has started up an innovative new home delivery service entitled Gram Evde, in which you can select from a weekly menu and receive a box of prepared ingredients and instructions to freshly complete one of her culinary masterpieces on your own, at home.