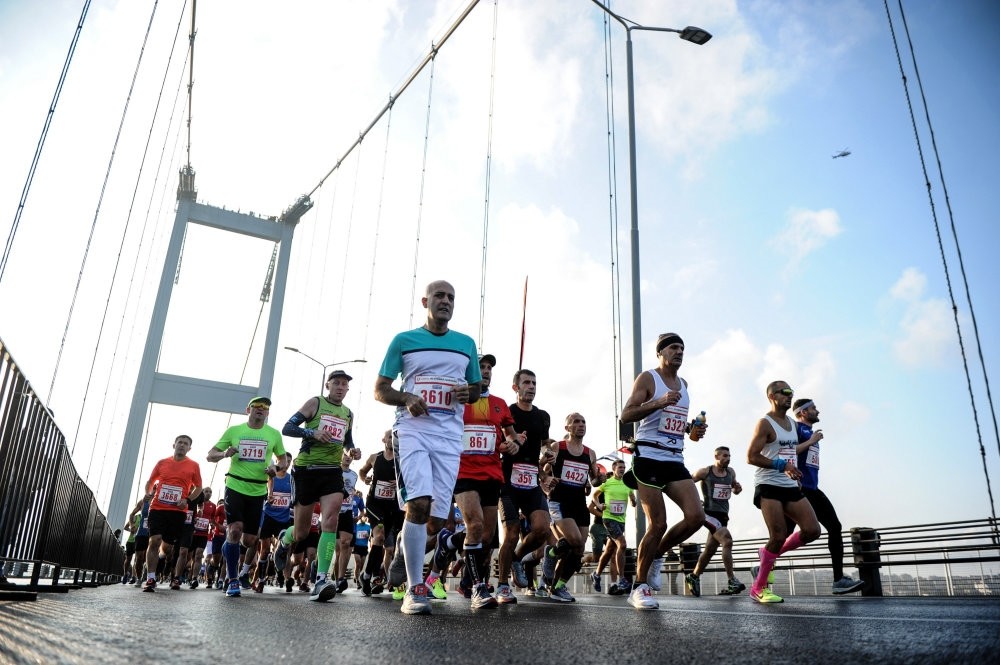 The Vodafone Istanbul Marathon, which takes place on both European and Asian continents, is scheduled to take place Nov. 3, 2019.
by Leyla Yvonne Ergil Feb 08, 2019 12:03 am

Do you feel like running? Well, in the upcoming months, Turkey is getting ready to host a number of marathons that will appeal to professional and amateur athletes of all ages

Whether you are a seasoned runner or simply want to pick up the sport, there are a significant number of magnificent marathons held throughout Turkey, with fantastic terrain and vistas.

The following is a list of some of the best runs this spring and to look forward to in fall.

The Geyik Koşuları Trail Series are a series of runs held in Istanbul's Belgrade Forest. This year's runs will take place Sunday Feb. 17, June 22, Oct. 13 and Dec. 8. The categories include a 4K, 14K and 28K and kids courses. The date in June will be a night run.

On Sunday Feb. 24, the Istanbul Ultra Trail Mud Race will take place in Çekmeköy in the categories of 9K, 15K, 30K and 45K as well as a 30K bike race. Organized by Team Ultra Trail Runner, they hold a number of races in Istanbul throughout the year to keep your eye out for.

On Sunday, Mar. 3, Runatolia takes place in Antalya with a half and full marathon, a kids' run, the 4k Terra City run and its unique "high heels run," in which women race in 7 cm heels.

The Ephesus Ultramarathon will take place on Saturday March 16, starting from Şirince and running through off-road terrain with views of the spectacular ruins of Ephesus, the Virgin Mary's house and multiple castles. There are three different categories of trail runs, namely the Artemis Race 12K, Virgin Mary Run 25K and Ephesus Ultramarathon 55K and a Pasta Party on the night before the race

The Latmos Ultramarathon is a 45K and 17K that will take place on Saturday April 6 predominantly on a footpath along the Beşparmak Mountain range where the provinces of Aydın and Muğla meet. The run sets out from the village of Bağarcık and leads to the majestic Lake Bafa and its adjacent historical village of Kapıkırı.

The Vodafone Istanbul Half Marathon consists of a 10K and a 21K road run along the coastal road between Yenikapı and Sirkeci that will be held on Sunday April 7.

RunDatça takes place on Sunday April 14 with a 21K, 10K and a 5K fun run for adults as well as 500m and 1,000m runs for children. The event will kick off on Saturday night in Cumhuriyet Square with a Pasta Party and other entertaining activities, while the race, which will take participants through the ruins of ancient Knidos as well as along the coast, is a great opportunity to

discover Muğla's Datça peninsula, which is easily accessible from both Bodrum and Marmaris.

Turkey's longest single stage running race, the İznik Ultramarathon, held on trails and around a lake in the historical Iznik region of Bursa, aka Nicaea, takes place over the weekend of Aril 19-21. The longest race has been increased from 140K to 160K this year, with solo and two or four-person relay options. In addition, there will be a 90K, 55K, 35K and a 5K taking place over the weekend.

The Pamukkale Ultra Marathon will take place on Saturday May 4 with 15K, 30K and 60K races. The race takes place in the famous spa town of Pamukkale (cotton castle in Turkish) for the appearance of its spectacular calcium-rich mineral springs and bath spas. The event kicks off with a traditional Pasta Party on Friday evening and concludes with an award ceremony and Closing Dinner Saturday night.

The Gordion Half Marathon began last year to promote the ancient site of Gordion located near the capital of Ankara and takes place in Polatli on Sunday May 5.

On Sunday May 5, the Wings for Life World Run, a global charity run started to help spinal treatments that takes place in many cities around the world, including Izmir, will take place with its unique format of allowing participants to run for as long as they choose.

The Sapanca Ultramarathon consists of a 9K, 35K and 55K that go through trails in the forests and around the lake that this region of Sakarya is famed for. The Pasta Party is Saturday June 15 with the races taking place on Sunday June 16.

The Ordu Ultra Marathon + Bicycle takes place over the weekend of June 28-30 in the plateaus and plains of Ordu, which is located on the Black Sea coast. This off-road race has numerous categories, ranging from 5K to 50K and two separate bicycling categories.

The racing season dwindles in the summer season due to the sweltering heat with the exception of the Garmin Runfire Salt Lake Ultra Trail, which will take place July 26-28 in 10K, 20K, 40K, 80K and 100 Mile categories on the salt lakes in Şereflikoçhısar, which is located between Ankara and Konya.

The season then picks up in September with the Kaçkar Ultra Marathon held in this mountain range that rises over the Black Sea Coast and the Lycian Way Ultra Marathon, which takes place on the historical trail that spans hills over the coastline from Fethiye to Antalya and held Sept. 27-29. The Frig Valley Ultra also takes place in September and is a trail run that visits castles in the Frig Valley of Afyonkarahisar.

In October, the marathon season heats up with the Bodrum Half Marathon scheduled for Oct. 6 and the Türkcell Gallipoli Marathon normally held in mid October. While this is a great time to visit the popular summer holiday resort town of Bodrum, it is also a wonderful season to run along the historical battlegrounds of Çanakkale. The Kaş Yarimadaton, which will be held on Oct. 12, is also a great run and opportunity to visit this beloved summer holiday spot in Antalya. Meanwhile, the Salomon Cappadocia Ultra-Trail is perhaps one of the most magnificent runs in the country as it takes participants through the valleys and hills overlooking the unique fairy-chimneys of the region.

One of the most famous races in the world, the Vodafone Istanbul Marathon takes place Nov. 3 and allows runners to cross continents. Bodrum Ultra, which is a course that goes through the town as well as the trails on the hills overlooking Bodrum, takes place in November and the year caps off with the Ida Ultra Marathon, which takes place through villages in the Kaz Dağları (Ida) Mountains in Çanakkale.