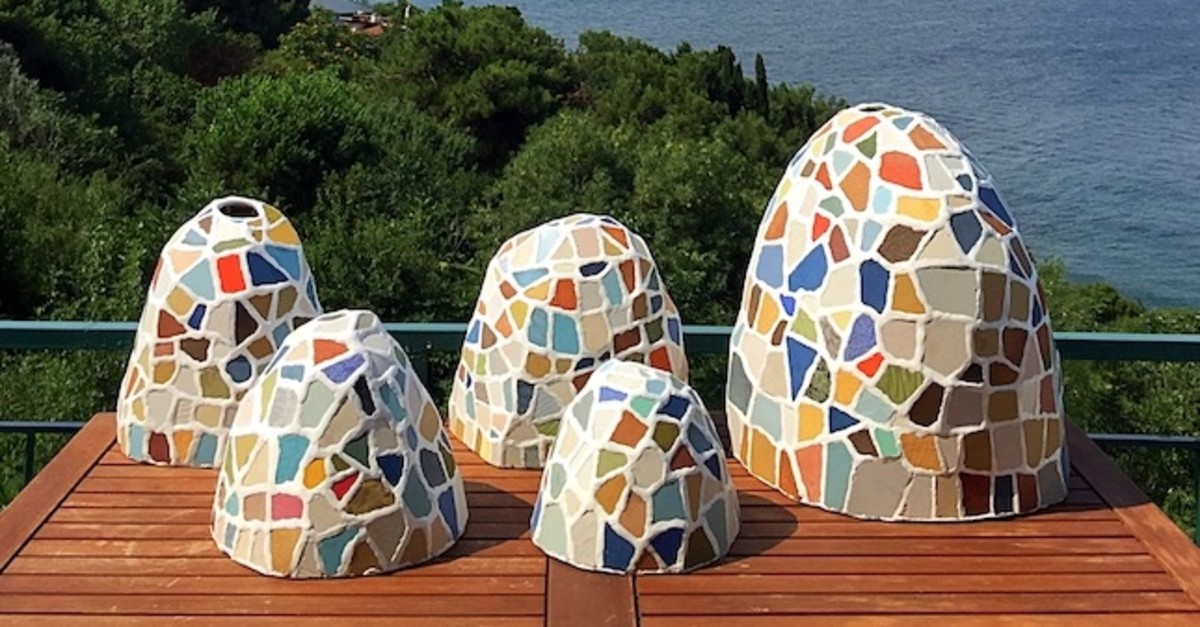 Koenraad Marinus van Lier, the Dutch artist, exhibits his artwork at Madam Martha Bay on Burgazada, Istanbul.
by Leyla Yvonne Ergil May 17, 2019 12:06 am

Dutch artist Koenraad Marinus van Lier will be exhibiting his artwork and sculptures from May 18-25 at Madam Martha Bay on Burgazada, the island where he resides and is known for upcycling and creating a spectacular spiral garden

For the past three years, Dutch expat Koenraad Marinus van Lier has been collecting pieces of tiles and other litter left on the beach in Burgazada, which he is been transforming into artwork. Starting this Saturday, for one week he will be joined by another local resident of Burgazada, which is one of Istanbul's Princes' Islands, to exhibit their work created through upcycling.

Upcycling is the practice of converting waste materials into new objects of "higher quality" and "greater functionality." By repurposing waste material into colorful sculptures and structures, Koenraad's work adds value to the litter he collects from the beaches of Burgazada and gives them new function as art objects. 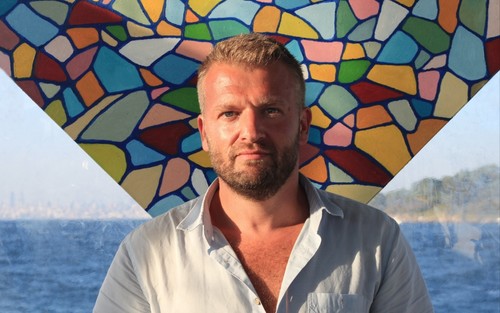 Artist Van Lier's mosaic flower pots will also be exhibited at Madam Martha Bay on Burgazada, Istanbul until May 25.

In this duo sculpture exhibition, "Dali Marinus," which will be held from May 18 to May 25, Koenraad, who was born in 1976 in the Netherlands, but has lived in Turkey since 2013, will be joined by Mehmet Ali Bakır, a Burgazada local born in 1957 to exhibit artwork made by the two islanders from two generations and two different countries who have a shared passion for creating, nature and the sea. The exhibition will be held at Madam Martha Bay, a beloved beach in Burgazada and the opening will take place this Saturday at 2 p.m.

Koenraad collects washed up construction waste, such as broken ceramic tiles and beach glass to construct sculptures and design gardens, such as the spiral garden he made on the beach at Madam Martha Bay. In addition to his sculptural work, his Bay ceramic series will also be on display, which is handmade pottery made from island clay. I had the opportunity to catch up with Koenraad to discuss the upcoming exhibition and his life as an expat on Istanbul's Burgazada Island.

Moving to Istanbul for good

Born and raised in the Netherlands, Koenraad studied Architectural Design at the Gerrit Rietveld Art Academy in Amsterdam. Drawing, painting and photography have always been his passion since his childhood and during his academic years he co-founded a multidisciplinary art foundation for young artists and later started a nonprofit organization for digital art called Born Digital, which took part in several international festivals including coming to Turkey in 2010, which was the European cultural capital. Visiting Turkey more and more since then, Koenraad says he fell in love with the vibrancy of this incredible energetic metropolis and in November of 2013, he made a permanent move to Istanbul. Trying a spell in Elmadağ, he later moved to the Asian side of the city, to Erenköy to be precise, which is much greener he tells me and its seaside is where he met his Turkish wife. After settling down, the couple decided to move to Burgazada, where they have lived happily now for nearly three years.

Explaining that as a visual artist, he needs to focus and not have too many distractions and thus, "The island brings me lots of inspiration and is more in balance with nature and has a positive energy. The people living on the island are a nice mixture of different ethnicities and religions living together in harmony," he adds.

He uses the balcony of their apartment as an open air atelier, and paints, makes mosaic sculptures and terracotta. "Almost daily I go to the beach (Madam Martha Bay), which I try to clean and where I started a beach and vegetable garden project," he said.

Koenraad's beach project is impressive, "a logarithmic spiral, which is a natural spiral that is found in many places in nature, spanning from snails, seashells, fossils, hurricanes and even galaxies," he tells me, which he created on the beach utilizing waste construction materials, which unfortunately were dumped on the beach. Two years ago, he began to clean the area and collect litter, while creating a public beach garden. "For me, the whole project is about trying to make a positive change and giving something back to the island which gives me so much inspiration and happiness. Every day the project is different, it's like a living sculpture changing with the seasons," he said.

"Working with found material from the beach, cleans the beach and gives a new life to what is considered waste material," Koenraad said, explaining that so many wonderful colored tiles from the 1950s to '80s are being dumped into the sea. "When you throw something into the sea it doesn't mean it is gone, the ceramics don't disappear that easily and it takes a lot of time before they turn into pebbles."

Koenraad has also found a way to utilize the mud developed from the erosion of waste materials on the beach and has created his own terracotta clay, which is what he uses for his Bay ceramic series, which he explains, are "literally created out of the island" and will also be on exhibition at Madam Marta Bay starting this weekend. In addition to sculpting, Koenraad is also an oil painter, who reconstructs landscapes and natural impressions with abstracted colorful structured layers of paint, many of which are created on a diamond-shaped canvases. In addition to the upcoming exhibition, Koenraad's artwork can be found on his website www.koenraadvanlier.com or on Instagram @koenraadmarinus and everyone is welcome to visit the gardens and sculptures on the beach at Madam Martha Bay and make an appointment to visit his studio on the island.

For the exhibition starting on Saturday, Koenraad will be joined by Mehmet Ali Bakır aka Dali, who was born and raised on Burgazada, where he has lived his entire life. After retiring from being a horse carriage driver, he started the beach venue Dali Marta, which is located in Madam Martha Bay on the southwestern bay of Burgazada. The area was heavily polluted with construction materials, which had been dumped into the sea for decades and he began using what he could find to build his own place and decoration, occasionally joined by other islanders and regular visitors. His unique and handcrafted sculptures, made from natural materials collected at the beach will also be on display at the exhibition opening this weekend on Burgazada, a small paradise just a short ferry ride away from Istanbul.