Where and how to kiteboard in Turkey 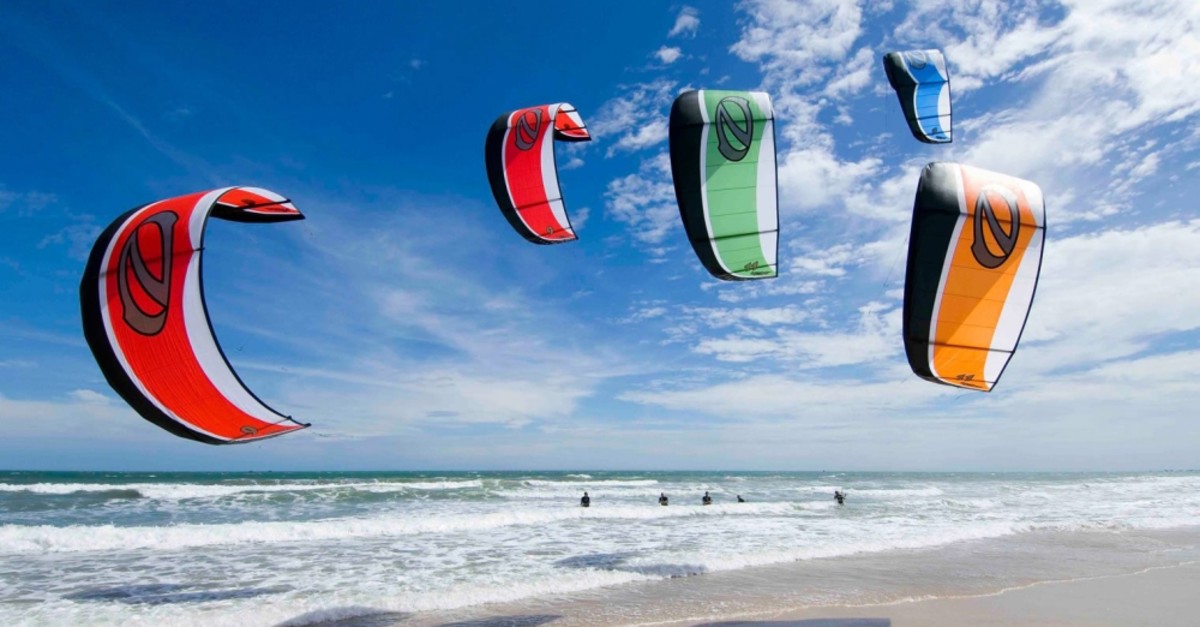 The action sport kitesurfing is an exciting alternative to try during the summer months.
by Leyla Yvonne Ergil Jun 21, 2019 12:18 am

If you want to do something exciting this summer, kitesurfing would be a good option. Here are the best spots for the thrilling sport in Turkey where you can harness the wind accompanied by perfect weather and sea

Kiteboarding is growing quickly in popularity in Turkey, which offers multiple fantastic areas with perfect conditions and excellent atmospheres to learn the sport. An adrenaline rush as you fly through the sky, this is a sport that should be on your bucket list.

Taking lessons are easy, they are usually offered in eight-hour packages totally approximately TL 2,000 and in just a couple of hours of training on land, you can be skimming the surface of the sea on even the first day.

Turkey happens to have a kiteboarding haven in Akyaka, which is located in Marmaris on the Gulf of Gökova. It is a beautiful town with a social scene overwhelmed by devoted kiteboarders. What windsurfing did for Alaçatı, which became a hip boutique town due to its proclivity for windsurfing, the sport of kiteboarding has transformed Akyaka into one of the most happening summer holiday destinations in Turkey.

The conditions that make Akyaka special include its three-kilometer surfing course, sandy shallow waters and the constant thermal winds it is famed for. Similar to Alaçatı, the kite schools in Akyaka are located at a walkable distance on Akçapınar beach, less than a couple of kilometers from town in an area which has been designated for the sport. There are over a half dozen schools that also operate cafes and restaurants. Located at the farther end of the beach is Kite Academy, one of the most well-established schools in Turkey that also operates a kiteboarding school in İzmir's Urla town. Kite base Gökova is one of the closest schools to the town with the school Kite-extreme located next door. Kiteboard Gökova and Kitemercedes by Bilge Öztürk are two other kiteboarding schools in Akçapınar. 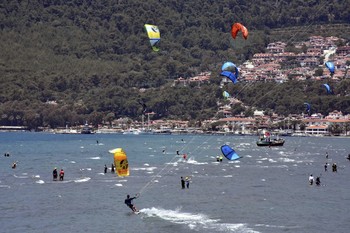 The perfect conditions for learning the sport coupled by the picturesque and lively neighboring town of Akyaka make the Gulf of Gökova the number one location in Turkey to learn the sport. Situated along the Azmak River, which is lined with rustic restaurants on platforms with the river running below and a vista of lush mountains, Akyaka is fast becoming one of the most happening boutique destinations in Turkey. It has its own unique architectural style, which is reminiscent of Swiss Chalets and has restaurants and hotels to accommodate every taste and style. No. 22 Riders' Inn is the definitive hangout spot and hotel for kiteboarders in Akyaka and holds parties and musical guests regularly throughout the season.

Urla is a town located between the city of İzmir and Alaçatı that is fast becoming a popular destination to learn how to kiteboard. While the town itself is located inland, it has grown into a mini boutique holiday destination similar to its neighboring Alaçatı, Turkey's windsurfing paradise. The kiteboarding beach is located in Gülbahçe, a good half dozen kilometers away from the town itself in an expansive marshy area that has shallow waters conducive for beginners. Kite Academy, Urla Kite Center, Kite Club Urla, Kite Station Urla and Urla Foil are the schools located on the beach and there are also two kiteboarding specific hotels nearby by the names of Urla Surf House and Urla Kite Camp, which have comfortable rooms making for the perfect opportunity to stay close to the beach and with those also devoted to the sport.

The island of Imbros, in Turkish Gökçeada, which is located in Çanakkale province and is Turkey's largest island and most western point, is known for its strong winds and being Turkey's second most popular destination for windsurfers after Alaçatı. While windsurfers dominate the seas in the village of Eşelek, where the surfing is concentrated, there are also two schools that offer kiteboarding lessons by the names of Volkite and Radikal Surf School, making it possible to learn the sport with the pros. There are also a number of hotels, including Gökçeada Surf Hotel in which to stay nearby and in the atmosphere of the surfer population that stay in campers along the shore. The sleepy summer holiday town of Ayvalık also has a particularly picturesque kiteboarding spot located in a neighborhood seven kilometers from the town center that is referred to as the 'sunken ship' area, thus this particular spot offers the opportunity of windsurfing with a sunken wooden ship in view and strong winds blowing. While there isn't much in the neighborhood, there is a surf school by the name of Kite Zone that operates out of a historical stone building located right on the shore making it certainly the most cinematographic of spots to learn the sport.

In the Çanakkale suburb of Güzelyalı, there is a kiteboarding school called İda Windsurf, located in the İda Kale Resort Hotel that takes advantage of the gusts of the Gallipoli Straight. Despite the setting's being more of an all-inclusive hotel atmosphere, this particular school is frequented by many pros in the sport and also offers beginner programs.

Surprisingly, Bodrum, which is arguably Turkey's most popular summer holiday destination, doesn't actually have a devoted kite beach, however, there is a school in Bitez that organizes kiteboarding from the neighboring Çelebi Island in the distance.

The Fethiye Surf Center in Çalış is famed for being a location filmed in the James Bond movie "Skyfall" and is in an area that is a lively vacation spot itself but is also in close proximity to Fethiye town.

The most unsuspecting of destinations to learn the sport of kiteboarding in Turkey has to be Adana's Çukurova. The Çukurova Kite Board Academy, located on Haylazlı Beach is an ideal spot to learn the sport for its constant winds and shallow waters, however, it is located 45 kilometers from Adana city and 15 kilometers from the nearest town of Yumurtalık. There is not much in the way of accommodation at present, however, the Çukurova Kite Board Academy plans to start offering a couple of hotel rooms to guests soon.

Don't be daunted if that seems too far, as there are a number of beach clubs that offer kiteboarding lessons on the Black Sea in Istanbul's Kilyos. Surf School Istanbul and Kiteboard Istanbul are two great places to start. While the water is rougher and the winds less, the proximity and happening social scene in Kilyos makes it fun and easy to tackle learning kiteboarding if it's on your bucket list.