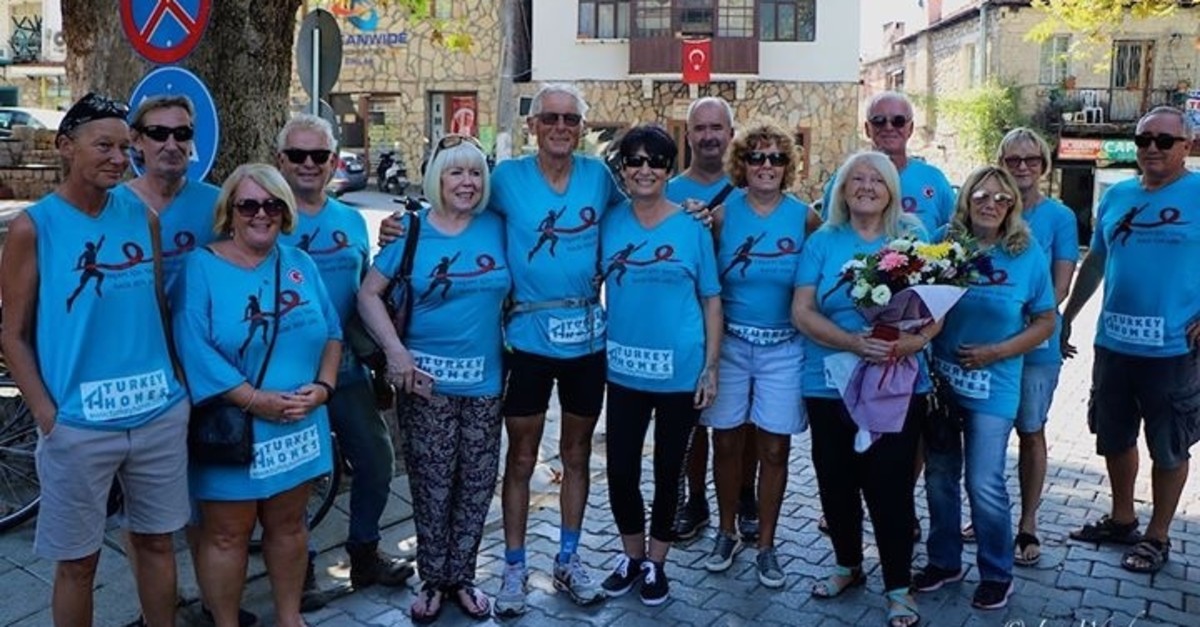 British national Pete Simpson's 'U.K. to Turkey Cycle Ride,' took him from Ormskirk, England to Üzümlü, Fethiye in 38 days in an effort to raise awareness and funds for the Race for Life charity

Last Thursday, Oct. 10, Pete Simpson, a 72-year-old British expat completed a cycling journey from his hometown in West Lancashire to his adopted home in Üzümlü, Fethiye. Spreading his time with his wife between Britain and Turkey, Simpson was welcomed by members of the local and expat community in Fethiye after 38 days of cycling on his own, entirely unsupported.
Pete set out from Ormskirk on Sept. 3 in an effort to raise funds for the Race for Life charity running competition that will be taking place in Fethiye on Oct. 27, as well to complete a lifelong dream of biking from his hometown to his home in Turkey. I had the fortunate opportunity to catch up with Pete soon after his arrival to find out more about how he conceived and completed this miraculous feat.
Originally hailing from the Midlands, Pete has spent most of his life working as a Probation Officer in England where he helped guide criminal offenders to rectify their lives. His wife Rosie was intent on finding “a place in the sun” which brought them to Fethiye’s Üzümlü over a dozen years ago and now together, Pete and his wife split their time between the two countries. While Pete has always loved to cycle and is actively involved in cycling and running groups, he is also an avid mountain walker and has traversed the summit of Mount Ararat and walked the Lycian Way and the St. Paul’s Trail. His wife Rosie is an active member of the expat community in Üzümlü and is a part of a crochet and art group and has also been involved with charity work in the region which brings us to why Pete Simpson took on this challenging ride.
“Yaşam İçin Yarış,” or “Race for Life” in English is a 5 kilometer charity run that will take place on Sunday, Oct. 27 in Fethiye for the sixth time this year and the proceeds go to benefit cancer patients and the state hospital in Fethiye. Many members of the expat and local community come together at this time of year to make the run a success and to raise funds to combat cancer. Pete’s U.K. to Turkey Cycle Ride was just one of such events. Earlier this summer there was also a “3 Mini’s Drive to Turkey” campaign, Lyn Ward of the indispensable website and guide Fethiye Times tells me, and together the fundraising efforts even before the race managed to raise upwards of TL 80,000.
Lyn was joined by Pete’s wife Rosie and members of the local cycling group Blazing Saddles and fellow friends, locals and expats alike, to greet Simpson as he arrived at Üzümlü by bike on Oct. 10. He completed 38 days of cycling from Britain to Turkey unsupported and at the age of 72, and will also be running the Race for Life.
Pete used his Garmin and Strava to record the ride, which shows a whopping 4,242 kilometers, 26,000 meters of ascent and 224 hours traveled.
“I averaged 118 kilometers and six and a half hours of actual moving time on my bike per day,” Pete tells me adding, “in fact I was typically out on the bike 10 hours per day as this included stopping to route find, admire the view and take photos, eat and et cetera.”
As for his preparation, he didn’t do much he tells me however, he has always been active, and did a similar bike ride to this in 1966 when he was 18 and made it all the way to Greece. He has participated in Triathlons and Half Ironman competitions for much of his life and just this July took the gold for his age group in the European championships. He is also an avid long-distance runner and mountain walker so he knows how to go the distance.
The ride went incredibly smoothly Pete tells me, saying that he felt physically fit throughout and the bike only had one puncture.
“My only problem was some over anxiety. I think it comes with getting old enough to think of all the things that could have gone wrong and be anxious that they might go wrong, but nothing did,” he exclaimed.
As for the highlights and challenges: While each country had its own characteristics in terms of scenery and history, Pete summarized the best parts of his trip, saying, “In Holland, cycles have priority over cars, Germany was great for its forests and Austria for its Danube cycle trail. Romania was wonderful because of all the children waving and welcoming me and Bulgaria was too for its tranquil rural scenery and quiet (though poorly surfaced) roads. Then finally Turkey, because it was ‘coming home’ and I love Turkey anyway also I could converse with people and because the roads have wide lanes on the sides which are safe for cycles.”
As for Pete’s greatest challenges he said that traffic volume, navigation and dogs were the trickiest to maneuver.
Last Update: Dec 20, 2019 1:03 am
RELATED TOPICS