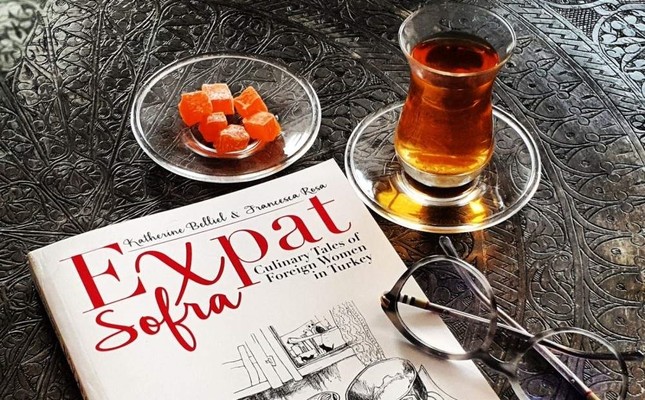 "Expat Sofra: Culinary Tales of Foreign Women in Turkey" is published both in English and Turkish.

The highly anticipated anthology of short stories penned by female expats in Turkey titled 'Expat Sofra: Culinary Tales of Foreign Women in Turkey' is now available online and at bookstores in Turkey and will be launched at the International Istanbul Book Fair on Nov. 7

“Expat Sofra: Culinary Tales of Foreign Women in Turkey” is a newly released compilation of short stories surrounding the theme of Turkish cuisine. Penned by 33 foreign women, each of whom has spent a significant amount of time in Turkey, the authors originate from nations including the U.S., England, the Netherlands, Poland, Australia, Canada, Ireland, Italy and South Africa. This anthology of intimate stories, delectable photos and appetizing recipes reads as part cookbook and part travelogue with each story sharing a unique and touching experience of the Turkish kitchen from the perspective of a female expat.

Many years in the making, "Expat Sofra" has finally been released, published in both English and Turkish and available online at www.alfakitab.com and Amazon and on the shelves at bookstores in Turkey such as D&R. There will be an official launch for the book at the International Istanbul Book Fair that will take place on Nov. 7, with a book signing followed by an introduction and reading at 4:45 p.m.

I had the opportunity to catch up with "Expat Sofra" editors’ American writer Katherine Belliel and Italian chef Francesca Rosa to discuss the highly anticipated release of this anthology that has long been in the making. Friends for years and both seasoned expats having lived in Turkey for years with a passion for cross-cultural exchange and sharing their knowledge and love for this country. Francesca is a graduate from Le Cordon Bleu Grand Diplome, food stylist and translator who has lived in Turkey for nearly 15 years and Katherine spent 12 years in Turkey as an English teacher. Belliel’s writing career launched after her acclaimed story of “Love and Loss in a Turkish Bath,” which appeared in the original and widely popular Turkish expat anthology "Tales from the Expat Harem: Foreign Women in Modern Turkey," (EH) which was a compilation of love stories released in 2005 and featured authors from all over the world who were female expats in Turkey.

I asked Belliel how the brilliant idea came about to revisit the concept of an expat anthology, and she said that there had always been requests for a sequel to "Expat Harem" and so going into its 10-year anniversary, Belliel said she was feeling nostalgic and wanted to commemorate the successful release of the book. “I was a young writer when I was a part of the anthology, and it was a big part of my life and early expat experience in Turkey. I was feeling nostalgic and asked the EH co-editors, Jennifer (Gokmen) and Anastasia (Ashman), if we could do a sequel to 'Expat Harem,'” said Belliel, sharing that while both have since moved on to different projects, they were encouraging and supportive of her vision to put together a sequel and Ashman wrote the foreword and Gökmen both contributed and advised along the way.

“'Expat Sofra: Culinary Tales of Foreign Women in Turkey’ aims to continue in the iconic footsteps taken by 'Expat Harem,' while forging its own unique path using food as a conduit,” said Belliel, who teamed up with Rosa, a certified Le Cordon Bleu chef, food stylist and translator who has lived in Turkey for nearly 15 years, to make the sequel happen. Together they put out a call for submissions with the only stipulation being that the author had to have lived in Turkey for at least one year. With responses by over a hundred writers, they narrowed it down to just 33 authors and Rosa helped each with their recipes, the photographs and the Turkish translation.

Expat Sofra follows in the footsteps of Expat Harem, but with the added component of each short story containing a recipe and corresponding photograph. “Expat Sofra: Culinary Tales of Foreign Women in Turkey" aims to continue in the iconic footsteps taken by Expat Harem, while forging its own unique path using food as a conduit," explain the ladies. And so, a call for submissions was put out with the only stipulation being that the author had to have lived in Turkey for at least one year. With responses by over a hundred writers they narrowed it down to just 33 authors and their stories, with each containing an accompanying recipe and corresponding photograph which Rosa and her culinary and food styling expertise helped in highlighting particular dishes in the stories and creating a unique recipe that is accompanied by photography done by Exit Photography and Production and Rosa’s guidance. Each picture in the book works as a visual explanation and continuation of the story itself.

“Our anthology takes you directly into the Turkish kitchen, and is told in bite-sized portions,” said Rosa, explaining that the questions posed and answered by the authors are “what are the experiences of foreign women in Turkey today, and how has food factored into their understanding of Turkish culture and experiences of living in a new country? The voices are very diverse on their experiences in Turkey, as are the flavors,” said Belliel, adding, “You can find a mix of everything in 'Expat Sofra.' There are stories that make us laugh out loud, others that make us cry, while others make us super hungry.”

“We really want this book to be the start of an 'Expat Sofra' community. We don’t want it to be just a book but a way to connect with people through food and intercultural experiences worldwide. The world seems so divided and scary right now, there is a huge need for connection, and what better way than through sharing food and stories about food?” Rosa asks. Over the years of the book’s development, "Expat Sofra" has had an active social media presence and a blog on the website expatsofra.com that continues to share expat stories of community, connection and cuisine.

Share on Facebook Share on Twitter
Previous in Expat Corner Devoted to promoting yoga and a wide variety of healthy lifestyle... Next in Expat Corner It is often hard to decide where to start discovering a new country,...
DAILY SABAH RECOMMENDS