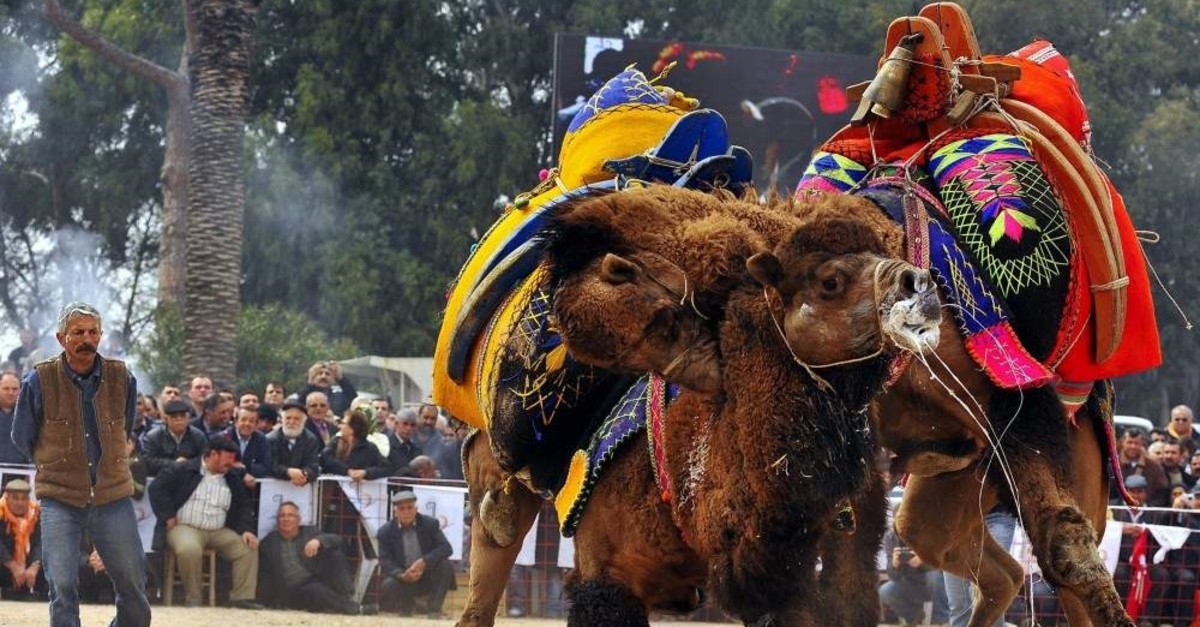 The age-old tradition of camel wrestling, a nonviolent spectator sport in which these beautiful beasts get to test their strength and experience their animal nature for an eager audience, is a popular pastime in towns all over the country

Camel wrestling is a tradition that has taken place in Turkey since nomadic times as an organized sport and for thousands of years before as an act of mating dominance.
Male camels instinctively fight one another to gain a female’s attention, this is part of the camel’s very own animal nature, especially during summer months, which is now lasts until early spring.
While for camels in the wild, which rarely exist any longer, this act can be a dangerous one, the controlled setting established at camel wrestling competitions in Turkey allows for these camels to safely engage in their animal nature.
The camels that take part in these competitions are considered highly prized possessions and there is never any intent or cause for any of these animals to be injured.
Take the term camel “wrestling” lightly and with a grain of salt, because the second the animals make any sort of attempt to overpower one another, they are separated by a team of volunteers who pull the animals apart the moment the contest becomes heated.
This is because those involved in camel wrestling do it because they love the animals and want to give them the opportunity to live out their full destiny and to feel the pride that they do when they win.
Even though there isn’t much physical contact, you can still see the pride and glory felt by the animal declared the winner. As for the loser, they are also consoled and cared for by their owners.
Owning a camel is a point of prestige in Turkey and is expensive and extremely time-consuming; so for those that do it, they truly love the animal and the sport. Each camel is given a name, which is embroidered on lush fabrics and decorations adorning the camel.
Funnily enough, much of the bedazzling of the camel’s costumes are done by their owners, a majority of which are men, who go all out to make their camel as colorful as possible. Witnessing all of the wonderful decorations is certainly one of the most entertaining parts of camel wrestling.
Watching these dolled up camels parade in front of a cheering crowd as they get revved up to test their strengths is unexpectedly exciting. Coupled by the huge crowds of all ages that come out to witness the event, many of which bring barbeques and fold up tables and chairs along with them, spending a day at a camel wrestling festival is highly recommended and truly a unique and exhilarating experience during your time in Turkey.
What to know before you go
The 2019-2020 camel wrestling season will be kicking off on Nov. 17 in Aydın and İzmir and will take place in dozens of towns along Turkey’s southern coast, spanning from towns in Çanakkale to Antalya until March. The most famous camel wrestling competition by far is held in the historical town of Selçuk on Jan. 19, so there is time to plan a trip to the region and one could easily combine seeing the magnificent ruins of Ephesus and visiting the Virgin Mary’s home with a day of camel wrestling.
After Selçuk, Bodrum is a fun and lively destination to experience a camel wrestling competition as is Çanakkale, Ayvalık, Didim and Kuşadası, each of which make for great getaways, while Aydın and Tire are also well-known historically being the oldest destinations to host the sport.
Regardless of where you watch a camel wrestling match though there are a number of constants, such as the following: these are family affairs that are open to all and many spectators will also be setting up their own barbeques and tables, transforming the stadium into a picnic-style party.
There will be multiple groups of wandering musicians playing drums and shrill pipes, at times aimed directly at the ears of passersby, but this is all par for the course and done in good nature.
Throughout the competition, the elaborate and sometimes outlandish names of the camel contestants are announced via loudspeaker as a commentator also narrates the matches over the PA system.
When it comes to the wrestling itself, the camels are led into the arena, where their owners or trainers will control them with ropes as protective measures should the match get too heated. The camels then attempt to lock necks or play fancy foot tricks and the winner is determined based on one of three conditions: if a camel retreats, yelps or is heading for a fall to the ground.
In every case, the animals are separated before any damage can be done and the winner is then paraded around the stadium for the cheering crowds.
An important note is to stay clear of the trainers that guide their animals through the stadium and no matter how tempting, refrain from getting too close to the camels when admiring their decorations and of course, never get in their blind side or behind the beasts as they can unexpectedly kick.
They also tend to foam at the mouth as they gear up to compete, which they spit out occasionally into the air hitting bystanders.
Meanwhile, there will also be stands selling camel wrestling related accessories, such as scarves and the accordion-like boots worn by camel-trainers and yes, there will also be camel “sucuk,” a rare type of sausage found at these events, that will be grilled and sold on the sidelines.
Last Update: Dec 20, 2019 1:31 am
RELATED TOPICS