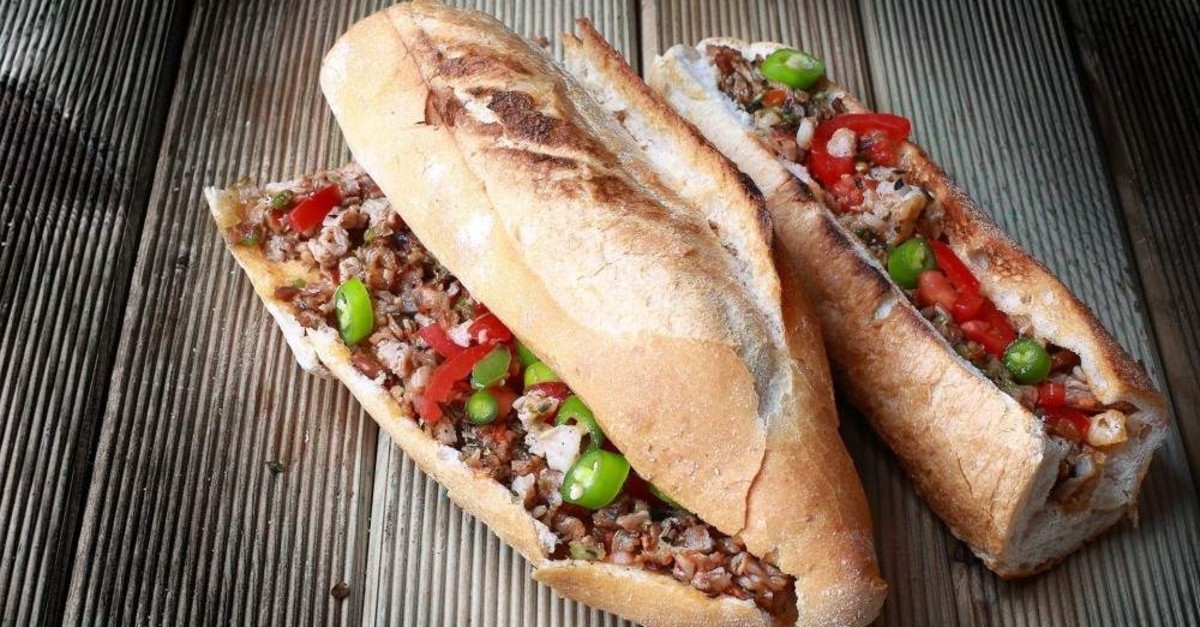 The popularity of street food is on the rise around the world, as well as in Istanbul, and this time chefs are returning to tried and true recipes to lure in foodies

There is no doubt that all over the world street food is in. Whether it's the convenience or the nostalgia of a return to flavors from the past, the traditional late-night snacks of yore are now taking center stage, and emphasis is being placed by a number of Turkey’s leading chefs to present this country’s culinary heritage with offal to the masses.
These chefs are taking timeless classics such as kokoreç, which is lamb or mutton intestines grilled on a rotating spit; uykuluk, or sweetbreads in Turkish; kelle tandır, referring to sheep’s head; dil, or tongue; and çiğer, which is liver, to a whole new level by opening up stylish spots specializing in these elusive cuts. If you are feeling adventurous and want to experience the newest development in Turkey’s cultural scene, then check out these four new restaurants that are taking on the offal challenge by storm.
Zuko Street Food & Pub in Maslak
The newest and most exciting addition to the revival of offal classics with a twist is Zuko Street Food & Pub, the latest venture by well-known chef Didem Şenol, who made herself a household name with her restaurants Lokanta Maya and Gram. Located in the Orijin Maslak food court, there is ample and comfortable indoor and outdoor seating at Zuko Street Food & Pub, which dishes up classics such as kokoreç two ways, liver and Şenol’s signature schnitzel in wraps or puffy pita bread sandwiches and also serves a vegetarian falafel option.
Muutto Street Food & Meze Bar in Moda
Muutto Street Food & Meze Bar is a stylish neighborhood fast food restaurant in Moda that was opened by Umut Karakuş, who was awarded Best Chef by the TimeOut Awards last year for his signature mezes at the fine dining restaurant Alia. You can try his famous mezes and even take them home at Muutto Street Food & Meze Bar, which serves up 10 different mezes and six durum wraps, with a number of innovative takes on street food classics. Think hummus with chestnuts, stuffed kale with yogurt foam and mustard-marinated bass with truffle oil as just some of the flavors on offer. The wraps include kokoreç, sheep’s head and a lamb liver wrap with hellim cheese and the easier to swallow beef ribs and chicken and onion chutney options as well as a falafel wrap on offer for vegetarians. The place comfortably seats around two dozen and has stunning granite counter seating and a few street-side tables.
Alaf Restoran in Kuruçeşme
Located on two floors in Kuruçeşme, Alaf Restoran, aka Alaf2Tek, is the signature of up-and-coming chef Murat Deniz Temel, whose past experience spans from some of the top restaurants in Istanbul, namely Mimolett and Alancha all the way to Copenhagen’s Noma, considered the best restaurant in the world. What started as a gourmet take on street food staples with a focus on offal has transformed into an elegant two-story rooftop restaurant and an entrance level devoted to gourmet fast food favorites kokoreç and mussels. The restaurant menu places heavy emphasis on offal options and even serves an offal tasting menu and is one of the rare venues to dish up şırdan, or tongue and sweetbreads, in addition to the offal classics like kokoreç and liver.
Ozzie’s Kokoreç in Asmalı Mescit
Ozzie’s Kokoreç has a history of making kokoreç that spans back to 1968 and Oğuzhan’s father’s kokoreç shop in Dolapdere. Taking the reins and opening in Beyoğlu’s bohemian Asmalı Mescit neighborhood last year, Ozzie’s Kokoreç is in a league of its own. Widely considered to be the best kokoreç in Istanbul, Ozzie’s is also the only kokoreç fast food restaurant in town that requires a reservation. The space is quaint but an obviously new generation kokoreç shop and his menu, which is simple, highlights his famous kokoreç, known for being hand-wrapped in sweetbreads every morning, but also offers his signature sucuk and sausage as well as his mama’s köfte as sandwiches.
In other street food news...
Restoran Haftası, aka Restaurant Week, will mark its 10th year in Istanbul starting this week and running until the end of the month. The theme is Turkish cuisine and for the next fortnight, chefs and restaurants throughout the city will be serving up specially curated dishes for breakfast, lunch and dinner at a set price of TL 35 for breakfast or lunch and TL 60 for dinner. There are dozens of restaurants participating, including most of those mentioned above, but the full list of participating restaurants and events can be found on restoranhaftasi.com. Some of the highlights include a full-day panel on Turkish cuisine on Sunday, Nov. 24 at Feriye Palace, as well as three different events focusing on street food that will take place on Thursday, Nov. 24 at Basta Moda, Nov. 27 at TRC American Diner and on Nov. 28 at Banko Burger.
Street food will also be the highlight of the upcoming Indonesian Street Food Festival that will take place at Mövenpick Hotel in Levent and is held in conjunction with the Consulate General of the Republic of Indonesia. The event will take place from 3 p.m. to 8 p.m., and entrance is free.
Last Update: Dec 20, 2019 1:45 am
RELATED TOPICS