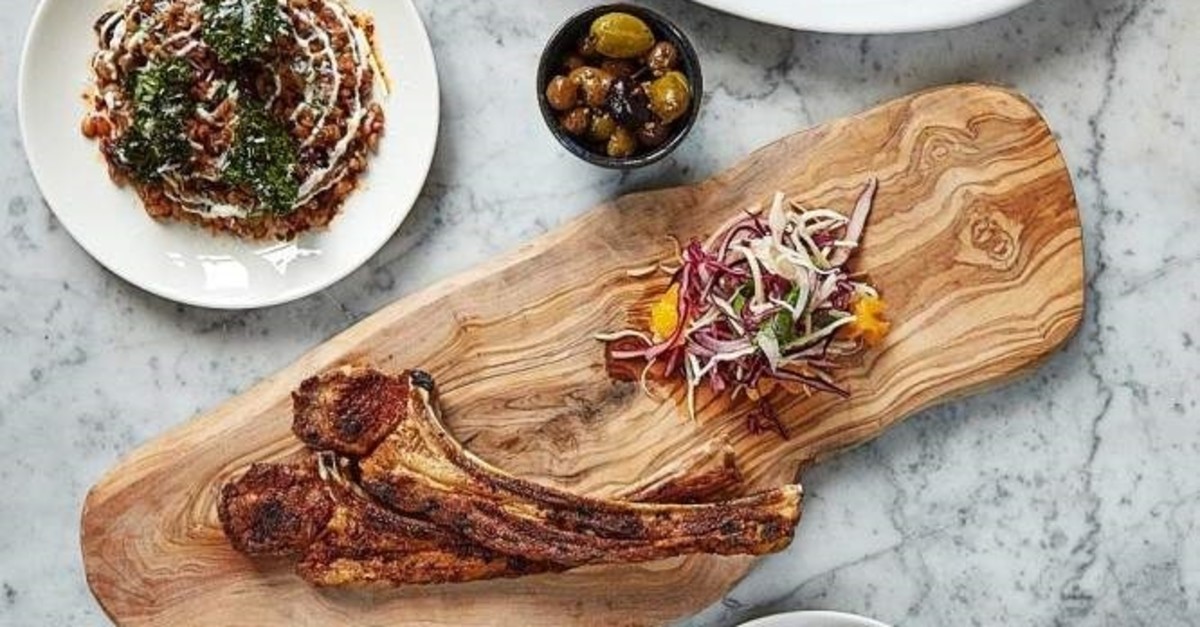 Kiazim is pushing traditional boundaries to pull Turkish cuisine out of the kebab shop and onto the London restaurant scene. (Manuel Vazquez)
by Leyla Yvonne Ergil Jan 09, 2020 1:39 pm

Whether they are becoming household names with their restaurants all over the world or breathing life and innovation into the culinary scene, these Turkish chefs and businesspeople are blazing a trail with their stories of success

Innovative Turkish chefs, entrepreneurs and philanthropists are making a name for themselves in the culinary world abroad. From a whole new strain of non-dairy products to fried chicken in a cone, check out these great new inventions, openings and success stories from Turks all over the world.

At this point in time, Chobani has pretty much become a household name throughout the U.S., where the company's founder and Turkish native Hamdi Ulukaya single-handedly introduced the subset of strained yogurt, aka Greek yogurt to the western world a decade ago. The top strained yogurt brand in the U.S., which also upholds a one-fifth share of the entire American yogurt market and was named "Company of the Year" for 2019 at the Food Dive awards, has recently announced a whole new line of oat-based milk and yogurts, which will be both vegan and gluten-free. Starting last month, Chobani Oats began offering four different flavors of oat milk which include, plain, extra creamy, vanilla and chocolate as well as four blends of oat yogurts, in the flavors, blueberry-pomegranate, peach-mandarin, strawberry-vanilla and plain vanilla as well as three different mix-in blends, which are Blueberry Almond Crumble, Peach Coconut Crisp and Strawberry Granola Crunch. 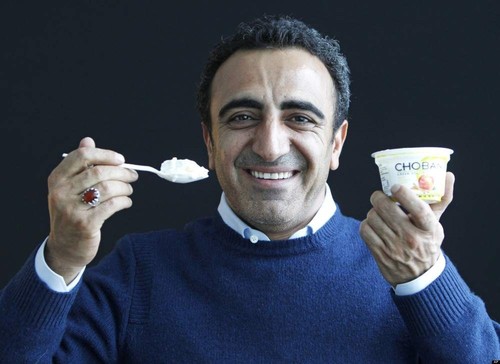 These innovative non-dairy oat products have recently become all the rage, especially in the U.S., where they are widely available. They are favored among non-dairy substitutes for being even more nutritious than other vegan counterparts, such as coconut, almond, soy and cashew milk and their production, and thus purchasing, is much more affordable. In addition to Chobani's oat products the company will also be introducing a brand new line of dairy-based creamers, think powdered dairy substitutes such as Coffee-mate, however, in this case, the creamers will be made from real cream rather than being oil-based as are its predecessors. The introduction of both new product lines marks the first time Ulukaya's Chobani will be producing products other than yogurt.

This new innovation follows his entry into the vegan and children's food market earlier this year with nut-butter based yogurts and his children's food line called Gimmies. But none of this should come as much of a surprise as Hamdi Ulukaya, who grew up in a dairy-farming family in Erzincan, has been revered for years as both a visionary and philanthropist as well as recognized for the good practices he implements for his employees. Hailed has conducted a number of firsts such as offering 2,000 of his employees an ownership stake should his company become publically traded as well as working on a process to identify and purchase from dairy companies that treat their employees and animals fairly, Ulukaya, who first went to the U.S. in 1994 to study English, also offers English lessons to his staff of which 30% happen to be refugees and immigrants. Meanwhile, in his native Turkey, Ulukaya also offers support to young entrepreneurs and startups in Turkey in his program called HUG.

If you didn't know that the most famous pizza chef in Manhattan's Eastside is a Turk, then it is about time you became familiar with Hakkı Akdeniz, the pioneer of Champion Pizza Soho and a total of seven pizza restaurants – a world champion of pizza acrobatics to boot. But his start and success did not come easy. Hailing from a remote village in Diyarbakır, Akdeniz first immigrated to Canada at a young age, where he ended up buying himself a one-way ticket to New York in 2001 to try his hand at fulfilling the American dream. After being homeless and staying in New York's infamous Bowery Mission and working in menial jobs, five years later, he was able to open his first Champion Pizza and managed to open seven pizza shops in New York, making a name for himself and his Champion Pizza brand. He has since garnered 3.5 million followers on Instagram and last year was the recipient of the Beacon Award among a total of 12 awards, including two given by New York Governor Andrew Cuomo amongst others for his success as an immigrant. Just last month, Forbes also cited Akdeniz's as being one of the most inspiring immigration stories. In addition to his popular pizza shops, which are known to have been visited by a number of famous Hollywood celebrities, Akdeniz is also revered for his charitable efforts in both feeding and supporting New York's homeless community and for giving aid to those in need, such as when he teamed up with American rapper Jay-Z to provide two trucks of supplies to Puerto Rico in 2017 after Hurricane Maria hit. Over the years, Akdeniz has been featured on television and radio shows, in newspapers and magazines and a documentary film on his story may be making the festival circuit soon. 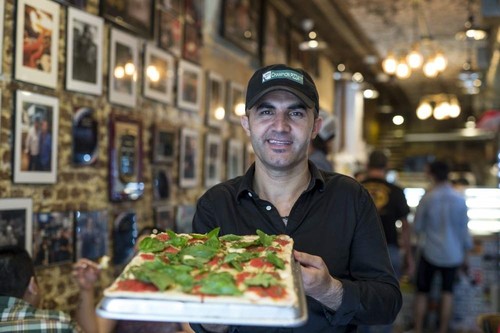 Hakkı Akdeniz started homeless and penniless but he eventually built a business empire with his Champion Pizza chain. (AA Photo)

In Akdeniz's newest venture he has branched out into the world of fast-food fried chicken by opening Cluck's on Essex Street, where he is serving his own signature "Chicken Cone." Yes, as you may guess, this dish involves fried chicken and condiments being served up in either a vanilla or chocolate cone. Don't fret if this sounds strange, as Cluck's also dishes up chicken wings and sandwiches for those less adventurous souls.

Selin Kiazim to open Oklava Bakery in London on Jan. 21 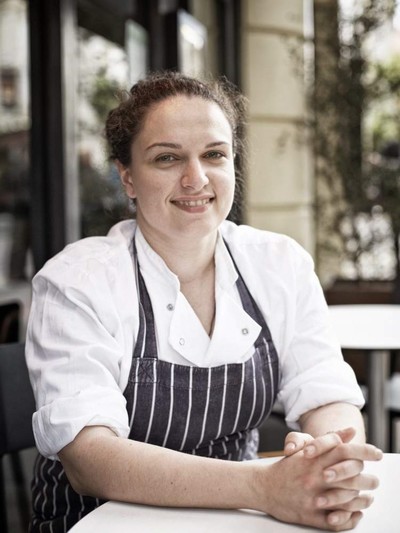 Brought up by Turkish-Cypriot parents, Selin Kiazim has become one of London''s most popular rising chefs. (Photo by Jonathan Gregson)

Britain-born Turkish native Selin Kiazim has been introducing innovative Turkish food to London through her restaurants Oklava in Shoreditch and at London's Arcade Food Theater, which showcased the Turkish-Cypriot cuisine of her heritage to Kyseri, in Fitzrovia, which was centered on Turkish pasta from Kayseri. This month, Kiazim and her partner Laura Christie are gearing to transform Kyseri into the bakery-café Oklava, which will be reopening on Jan. 21 in the same location and will be serving up Turkish-Cypriot pastries, breakfast items and savory dishes from morning to night. Kiazim is becoming a well-known chef in her own right in Britain by becoming one of the winners of BBC Two's television series "Great British Menu" and by releasing her own cookbook entitled Oklava in 2017. To attest to her popularity, when Kiazim and her partner announced the planned launch to branch into a Turkish bakery, they started a crowdfunding campaign on Kickstarter, which smashed its goal in days.