Turkish Highline Carnival: Soaring in the sky in Geyikbayırı 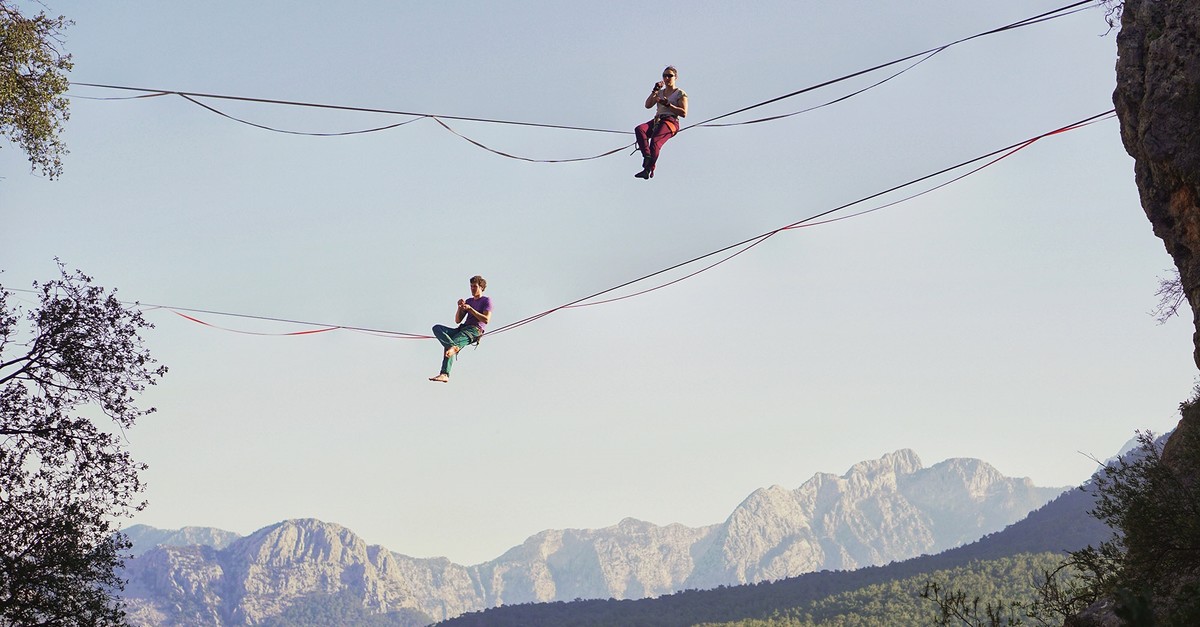 Slacklining is similar to the art of walking a tightrope.
by Leyla Yvonne Ergil Feb 17, 2020 4:00 pm

Going into its eighth year, the Turkish Highline Carnival held in Geyikbayırı, Antalya is one of the world's most popular events for highliners

The 8th Turkish Highline Carnival, THC 2020 for short, will take place in Geyikbayırı, Antalya, Feb. 22-29. Starting this Saturday in Geyikbayırı, Turkey's top destination for rock climbers, the Turkish Highline Carnival draws pros and enthusiasts in the sport from all over the world. Similar to slacklining and tightrope walking, highlining is the sport of traversing a nylon line at varying heights. A sport that should only be tackled by the experienced, highlining differs from tightrope walking in that the line used to cross is not rigid or thin as in the latter but is a more flexible and slightly wider line that allows for more movement. The difference between highlining and slacklining is that the two points crossed are set up at heights of between 15 and 100 meters.

Slacklining is certainly the gateway to highlining, and this event, which is immensely popular among the international highlining community, is organized by Turkey's Slackline Association (in Turkish, Slackline Derneği) and a team from the International Slackline Federation, which contributes to the technical and safety planning area of the event. Highlining is also a popular pastime among rock climbers as there are similarities between the sports. The founders of the Turkish Slackline Association are both rock climbers and highline enthusiasts.

The event was first started by Nuri Kayserilioğlu, Can Şahin and Raffael Thomale, who made up the Slackline Turkey team, which was the predecessor to Turkey's Slackline Association. In fact, it was Thomale, an Austrian expat, who in 2012 discovered the potential for highlining in Geyikbayırı, considered one of Europe's most popular rock climbing spots. Thomale invited fellow rock climbing, slacklining and highlining enthusiasts from all over the world to come to Turkey to give it a try. Hence, the first-ever Turkish Highline Carnival took place, mostly with the participation of foreigners. These extreme sports enthusiasts also started the tradition of dressing up in clownish costumes as they traversed the lines set up between the limestone crags of Geyikbayırı, with vistas that overlook the Mediterranean, making for a colorful, entertaining and breathtaking spectacle for onlookers.

I had the opportunity to catch up with Kayserilioğlu as he was heading out to Antalya to get the show started to discuss some of the differences that will be incorporated into this year's event. First of all, he told me that, in addition to the 20 lines that will be set up between 15 and 100 meters above the ground, there will also be a number of lines in a separate area set up at over 100 meters high.

This year, for safety measures, there will also be a new system implemented in which participants will be asked to prove their proficiency in the sport to be able to traverse the highlines, and participants will be given bracelets of different colors denoting their experience level in the sport. Those that are less experienced will be able to take part in workshops on the sidelines and may have the opportunity to advance to the highlines according to their progress during the carnival.

This year, the International Slackline Association (ISA) will also offer an instructor-C course for experienced slackliners to become certified to teach slackline to beginners and to learn the basics of safe slacklining, such as setting up lines themselves and methods of instruction, which will be held on Thursday, Feb. 27 at JoSiTo Camp in both English and Turkish. The ISA also holds an annual meeting at the event, which will take place on Monday evening, Feb. 24 at Rido Camp.

This carnival is a popular pastime for rock climbing enthusiasts as well as jugglers, and there will be opportunities to both climb and juggle and participate in workshops on both, in addition to a variety of slackline courses such as leash climbing and mounting techniques that will take place throughout the carnival. This year, there will also be a contest held among the highlining participants.

Kayserilioğlu said the organizers are anticipating around 400 participants this year. While in the initial years of the festival, a whopping 85% of the participants were foreigners, with the increasing interest in slacklining in Turkey, Kayserilioğlu said they are expecting around 70% of the extreme sports enthusiasts to be foreign and 30% to be Turkish this year. I also talked to Kayserilioğlu about the blossoming slacklining scene in Turkey and when and where people can get the opportunity to learn more about and practice the sport. He told me that while there has been a momentary pause in gatherings due to weather conditions, in general, the Slackline Association holds meetups in either Yoğurtçu Park in Kadıköy or Maçka Demokrasi Park at least once every two weeks.

Located less than 30 kilometers from Antalya's city center and within the borders of the Sivri Dağ and Termessos national parks, Geyikbayırı boasts the largest crag in Turkey at 4 kilometers long, making it a haven for rock climbers. To accommodate visitors, a variety of lodging options are geared toward outdoor sports lovers. JoSiTo and Rido Camp serve as popular base camps with bungalows and tents set up, while Climbers Garden also offers camping and The Land has a self-catering house. Flying Goat Camp & Hostel has both onsite camping facilities and dorm room options, and Peak Guesthouse offers bungalows and spectacular vistas. All of the campgrounds are located within walking distance of the lines that will be set up during the carnival.