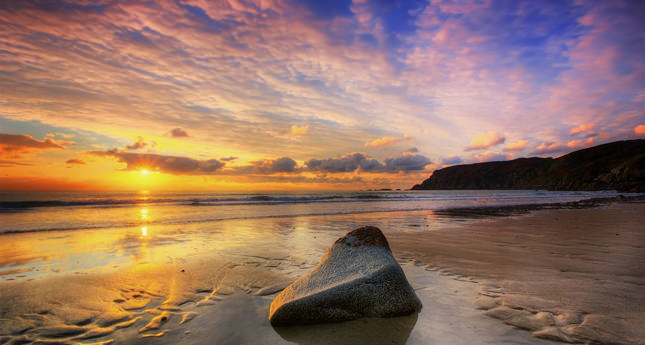 by Leyla Yvonne Ergil Feb 24, 2014 12:00 am
I made my final move to Turkey nearly ten years ago, the relocation fulfilling a longstanding dream of living in the land of my heritage and even more so the bustling excitement of Istanbul. For the first few years, I lived in Cihangir, a near prerequisite for foreigners making the move to Istanbul. Eventually, the encroaching buildings and the endless sounds of traffic spurred me to seek locations outside the hustle and bustle. Although I will always be an Istanbulite at heart, I divided my years here between Bodrum and Kaz Dagları, a village in the Ida Mountains - which I now call home. I grew up in Santa Monica, California, with a Turkish professor as a father and an English mother, both of whom relocated to Turkey. After completing an undergraduate degree in anthropology at the University of California Santa Cruz, I went on to attend graduate school at the University of Texas at Austin, where I received a Fulbright grant to do research in Istanbul, the ideal catalyst for my transition to Turkey. For the first few years, I enjoyed the lively city and its vast cultural offerings. The more I traveled outside the city and experienced Turks and the Turkish habitat, I realized what I sought was the relaxed atmosphere and environment of the country's more rural regions. When a new threestory villa popped up for half the rent of my flat in Taksim, I jumped at the opportunity to move to Bodrum.

After spending a few years in the lovely town of Yalıkavak, which with its active expat community, new marina and fancy shops and cafes was reminiscent of a mini Los Angeles in Turkey, I discovered the Mount Ida region, located between the Çanakkale and Balıkesir provinces and above the Gulf of Edremit. On a drive through one of the 64 villages in Çanakkale's Ayvacık district, which includes Assos as well as two other newly popular picturesque villages, Yesilyurt and Adatepe, I ended up having a life-changing tea break with the "muhtar," the elected village chief. As I complimented the village, its stone houses and vast rolling hills of autumn colors, I was suddenly extended the offer to live in a stone building that was once the village school and before that its mosque. I embraced the opportunity two years ago and never looked back. Since my time here, I have experienced being an expat in Turkey in a number of ways. From conducting research at a university to teaching English to Turks to working in a high-rise and ultimately for the press, I have had the opportunity to engage in the country as a professional foreigner, engulfed in the culture and lifestyle of Istanbul.

In Bodrum, I was embedded in the lifestyle of the other main category of expats in Turkey, the relaxed retirees, who have sought to establish permanent roots in popular holiday destination towns along the coast such as Bodrum, Datça, Fethiye, Marmaris and Antalya. Although there are also many Americans, such as myself, who have made the move to one of Turkey's seaside towns, the majority of expats in this category are Europeans, and especially British, who appreciate the fauna, flora and most importantly the weather. Many in this category have made the move to Turkey long-term, even purchasing homes and becoming active participants in their districts by organizing to take on challenges, such as volunteering their time to help street animals and donating to schools.

There is a third category of expats living in Turkey - which I also fall into now - and they are those who have chosen to veer from the beaten path and live in one of Turkey's more rural and less foreignoccupied regions. As a foreigner living in a village in Assos, I find myself exclusively surrounded by Turks for a vast majority of my days, which is by choice and a wonderful opportunity to truly experience the Turkish culture and its highly praised hospitality.

For the most part, all three categories of foreigners residing in Turkey are faced with the same joys and challenges and share similar woes, whether they are navigating through bureaucracy as an English teacher in Istanbul, which is the highest foreign-staffed category of employment, to dealing with buying a home as a foreign pensioner along the sun-soaked coast of Bodrum. Whether they are young professionals or rural retirees, expats in Turkey share the same interest in the country's historical legacy, cultural idiosyncrasies and modern innovations.

I hope to shed light on some of the mind-boggling and convoluted procedures, which is definitely the greatest challenge faced by foreigners residing in Turkey, while also pointing out the importance of shrugging off the obstacles with a cup of tea, a laugh or at the very least an act of sanity. Through this column, I also intend to share insights into the Turkish culture that may help in understanding, and if not, then at least appreciating why certain things are done the way they are here. I look forward to sharing my adventures with readers and delving into the experience of being a foreigner in Turkey, albeit off the beaten path.