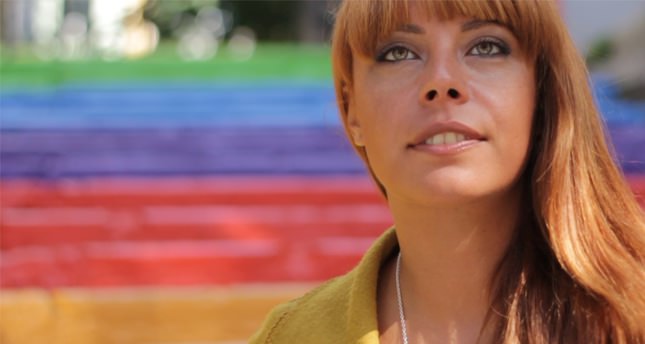 by Leyla Yvonne Ergil Mar 01, 2014 12:00 am
One of Istanbul's most alluring attributes for foreigners either visiting or living in the metropolis is undoubtedly the exhilarating nightlife, and in my case, the eclectic musical offerings. Therefore, when I heard wind of a new rising musical star, who fuses mystical vocal loops with jazz, funk and Latin rhythms by the name of Aysu Çögür, and who also happens to be an Australian Turk with a new single in the pipeline, I couldn't resist the temptation to venture out to witness this unique performer.

Self-described as a mixture of east meets west in ethnic, jazz, soul, funk and Latin fusion, Aysu Çögür's band, "The 4th World," took the stage at the Karakedi Cultural Center for a jam- packed show where the fans overflowed onto the side streets in Taksim's popular Tünel neighborhood. The concert hall was a sea of dancing music-lovers, which would open up occasionally in waves just enough to catch a glimpse of the petite red-haired vocalist with soulful eyes and a commandeering presence, who was joined onstage by saxophonist
Hakan Bilmez, bass player Çagatay Brakin, keyboardist Selim Sert and Baran Yıldız on drums.

Aysu Çögür and "The 4th World" were mesmerizing, taking the audience to new levels of their senses by compelling everyone in earshot to dance. Çögür's musical prowess and melodic range coupled by her confidence on stage and the ease in which she transitioned from Turkish to English makes one acknowledge that some people are just blessed with genuine talent. I felt fortunate witnessing her original performance, as she is undoubtedly a standout act and a unique talent that should not be missed.

The crowd was composed of a wide mix of hipsters and music lovers, a majority of which were foreigners. This may not come as a surprise, since Aysu Çögür could be considered a foreigner herself. Born and bred in Melbourne, Çögür made her big move to Turkey in 2010. I had the opportunity to meet with the charming performer, whose magnetic personality is the perfect combination of charisma and affability to discuss what brought her to Turkey and what she loves about the country of her heritage.

Çögür, who grew up in Australia with her Turkish parents who left Izmir in the seventies, was drawn to explore her roots and the music of her native land, peaked by an interest to further her knowledge of makam, a variation of melodies prevalent in Turkish classical music. Before making the move to Turkey, Çögür had performed at venues throughout Melbourne and greater Australia, combining her musical training in jazz with funk, flamenco and dance outfits. "I'm so thankful for all of these experiences. It is because of these projects that I have a collection of a very diverse range of genres under my belt and so my original project now "Aysu Çögür and The 4th World" is full of all of these colors and sounds, which I have collected from these past musical experiences," the singer explains.

Çögür will be releasing "Nur" her first official single and video clip in Turkish in mid-February. The singer-songwriter penned the song while touring Spain last year. "The idea for the song was derived from a man who was living in Tarlabası. We were neighbors. He had four children and a wife and they were living in a one-bedroom apartment. He had come to Istanbul from Diyarbakir as his relatives had convinced him that the job opportunities and the quality of life in Istanbul were much better than in his hometown. But unfortunately this was all a lie and Istanbul was only full of broken promises for him and his family," explains Çögür.

Describing Istanbul as a "beautiful and inspirational mess," Çögür reveals that although she is a gypsy at heart, the city has now become her home. "Something about this city has captured my heart and soul. It is heaven and hell, it is beauty and it is chaos.
Istanbul itself is a massive inspiration," says Çögür.

Although the move to Turkey did come with a culture shock that lasted nearly six months, the magnetic musician shares, "There are so many things I love about this place especially the people. They are so hospitable and some truly go out of their way to help out others." Çögür, who has had the opportunity to perform with a number of talented musicians in Istanbul including artists Birsen Tezer and Julide Ozcelik, also cites the Princes' Islands, and especially Burgazada as being a huge influence on her music, and says she has taken respite numerous times as an escape from what she calls the "beautiful chaos" of Istanbul. "It is just so amazing to have a beautiful sanctuary such as Burgazada to go to. Even the journey there on the ferry is so therapeutic," enthuses Çögür. When asked where her favorite place in Turkey is, Çögür says that Fethiye's Kabak Valley, situated along the Lycian Way, is her number one spot.

She also shared her hopes of eventually taking time for an extended stay there in order to write new songs to complete her album. Aysu Çögür's first official single release in Turkey, "Nuri," will be available on WePlay in mid-February; however, you can catch her mesmerizing performance at the Karakedi Cultural Center this Saturday, Feb. 1.