Colorful Hidrellez celebrations an event not to miss 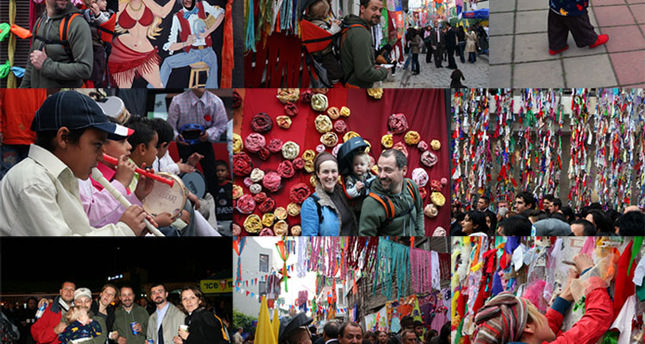 by Leyla Yvonne Ergil May 06, 2014 12:00 am
On the eve of this Monday and leading into Tuesday, Turkey countrywide will be celebrating Hidrellez, a festival to welcome the start of the spring and summer seasons and the reawakening of nature. If you have never partaken in these lively festivities before then this is definitely a unique experience you will not want to miss.

Not only is Hidrellez a chance to experience live gypsy music and dance as well as to jump over a bonfire, but it also involves a number of ancient traditions centered around the belief that wishes made on this night and the next morning will come true.

Although regularly affiliated in Turkey with the Romani gypsy culture, Hidrellez also holds much significance for Alevis and it is a holiday celebrated all over the Turkic world and in parts of the Middle East.

Celebrated annually on May 5th and 6th, Hidrellez is a seasonal festival held in honor of the day in which two saints of near-eastern folklore, Hızır (Khidr) and Ilyas (Elijah) meet on earth, which is considered to mark the ushering in of the spring and summer months and the reawakening of nature and abundance. Hızır and Ilyas are spiritual supernatural figures affiliated with the elements of land, water, fire and earth, after all the name Hızır translates into "the green one" in colloquial Arabic. The name of this celebration was derived as a fusion of these two mystic figures' names.

Hızır is believed to have attained immortality by drinking the water of life and since wanders the earth to help those facing hard times. He is believed to be a miracle worker and a source of abundance, prosperity and health, and grants benevolent people's wishes once a year on these two days, symbolizing a time of a revival as evidenced by the reawakening of nature. This annual celebration involves a variety of spirited traditions centered on the belief that any wishes made on the eve of Hidrellez for health, prosperity or abundance will be granted.

Hidrellez continues to be celebrated in many villages and towns throughout the country as well as in a number of metropolises. While in big cities, certain venues may be designated for the event, in villages and smaller towns, people gather in wooded locations rich in nature and near water, where they feast, practice the various rituals attributed to these special two-days and play traditional music, sing and perform folk dances.

Preparations for the event include spring cleaning, fancy dress and cooking, as according to beliefs, Hızır is expected to pay a visit to distribute blessings. Bowls are left out, pantries and purses are left open in addition to a window in the hopes Hızır will spread abundance to the homes visited.

Definitely one of the most exiting rituals that take place on the eve of Hidrellez is the tradition of jumping over a fire. According to beliefs, those who jump over the fire three times will be protected from illness for the entire year or they will have their wishes granted.
Some tie a colorful piece of cloth to the branches of a tree to symbolize their wish, while others construct models of what they long for which they place on the ground of their gardens or the festival grounds.

In another tradition, girls or women seeking good fortune or their future partner, place pieces of their jewelry into a pot. Water is then poured into the pot, which is covered with a lid and left to sit under a rose tree for one night. The next day the pot is placed in the center of a circle and women take out their pieces of jewelry while reciting verses.

It is also tradition to bathe or be doused by holy water at dawn after the evening's festivities. Many will also write down their wishes on a piece of paper, which they then release into the sea or other flowing waters.

Celebrating Hidrellez in Istanbul's Ahırkapı neighborhood in what is undoubtedly one of the city's biggest and most entertaining street festivals, is truly a unique opportunity. Held this Monday night, Hidrellez has been celebrated in this colorful neighborhood for over a decade. Expect to dance to live gypsy music and to watch people jump over fire. Musicians are welcome to bring along their instruments to partake in the festivities.

If you want the real deal however, head to Edirne as this province, which borders Greece and Bulgaria, is considered to be the heart of Turkey's gypsy community. The Kakava and Hidrellez Culture Festival is held in the Inner Palace (Sarayiçi), which once served as the private hunting grounds for Ottoman sultans.

Ankara celebrates Hidrellez in the popular and newly restored Hamamönü district in which Ottoman style homes from the 1920's now function as cafes, restaurants and artisan shops.

In the southwestern province of Antalya, thousands flock to the Gömbe Plateau, situated near the popular summertime destination of Kaş, where they partake in the spirited rituals in the picturesque surroundings of Green Lake (Yeşil Göl).