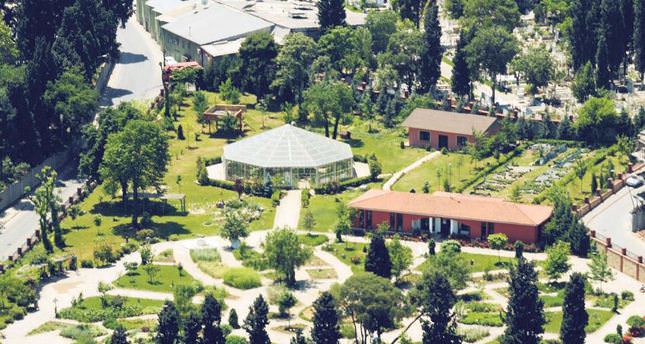 by Leyla Yvonne Ergil Jun 07, 2014 12:00 am
For an escape from the city within the city and a peek at Turkey's rich history in traditional medicine and a vast array of ancient and indigenous plants, don't miss the Traditional Medicine Festival and the chance to check out the Zeytinburnu Garden of Medicinal Plants. The Zeytinburnu Garden of Medicinal Plants (Zeytinburnu Tıbbi Bitkiler Bahçesi) will be hosting the 15th annual Traditional Medicine
Festival (Geleneksel Tıp Festivali) from Saturday June 7 until Sunday June 15.

This festival provides a great opportunity to learn about the country's history of traditional healing and to visit Turkey's first and only medicinal plant garden, located in the historic Zeytinburnu district, which straddles the shore of the Marmara Sea and the city's ancient walls on the European side of Istanbul.

The Traditional Medicine Festival will host a wide number of seminars and workshops for connoisseurs and children alike to learn about the ecosystem, the use and cultivation of medicinal herbs and the importance of protecting Turkey's flora. Hosting the event, the Zeytinburnu Medicinal Plant Garden has over 700 herb species, a greenhouse, herbarium, seed collection, laboratory and drying area situated on a 14,000-square-meter plot, all for the aim of researching, producing and promoting medicinal plants.

The fact that this very special garden, which was first opened in 2005, is situated in the Merkezefendi neighborhood of Istanbul's Zeytinburnu district is certainly no coincidence, as it was Merkez Efendi himself who nearly 500 years ago created the medicinal Mesir Paste out of 41 different herbs to treat the ailing mother of Suleiman the Magnificent. Due to the curative success of this sweet and spicy paste, Sultan Suleiman wanted to share the medicine with the public and requested that Merkez Efendi distribute the paste to people from the rooftop of the Sultan Mosque in Manisa every year in the form of a celebration, which has since become the Mesir Macunu Festival. This ongoing tradition, which dates back to the Ottoman Empire and is held at the start of spring, was included on UNESCO's list of intangible cultural heritage in 2012.

In honor of this rich history and Turkey's ancient healer, the Traditional Medicine Festival will kick off on Saturday with the distribution of Mesir Paste, which is credited with restoring health, youth and potency. According to legend, those who consume this paste will not be stung by a poisonous critter for the duration of a year, and girls who want to get married or have children will also be blessed with their desire within the year if they have partaken of this magical herbal potion.

Not only will visitors have the chance to try this special elixir, but the weekend will also be filled with concerts, workshops, seminars and a wide selection of activities for children. Visitors can learn about Turkey's endemic plants and trees, join a yoga session in the garden, attend a green coffee or beauty care workshop, learn how to prepare Ottoman desserts using medicinal herbs or how to make the mystical medicinal paste itself.

There will also be a number of concerts, including performances by popular Turkish performers Keremcem and Özdemir Erdogan, a Hacivat and Karagöz show, acrobats and jugglers and a regional cooking contest.

Seminars and workshops will be held at the garden itself, while a festival area will be set up for concerts and other events near the neighboring Merkezefendi Mosque, which was built in honor of its namesake nearly five centuries ago.

Although the Traditional Medicine Festival offers a unique opportunity to experience the Zeytinburnu Medicinal Plant Garden as well as the historic Zeytinburnu district, this very special sanctuary is open for visitors every day until 17:00, and they also accept volunteers if you want to get hands on. There are also a variety of courses offered year-round on the premises in a wide range of fields including aromatherapy, reflexology, massage therapy, natural cosmetics, ethnobotany and plant illustration, just to name a few. Visitors can also attend workshops to learn the art of bonsai and to make perfumes, soaps, bread, pickles, jams and vinegar. Special classes are also on offer for children such as making wooden toys and birdhouses or learning survival methods in the wild. The Zeytinburnu Medicinal Plant Garden also offers a two-week long ecology summer school for children to become more closely acquainted with nature. There are also several animal inhabitants of the farm such as rabbits, turtles, ducks and cats.

The Medicinal Plant Garden also has a vast list of medicinal oils on offer as well as products such as natural soaps and books that you can peruse in the garden itself or on their website. If you happen to visit on a Saturday, you might also want to stop by the Zeytinburnu Organic Market, which is held from 8:00-19:00 on the grounds of the Merkezefendi Mosque.
RELATED TOPICS