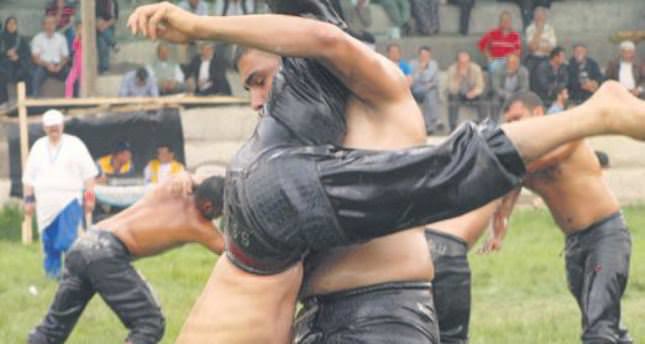 For a chance to see what might be the closest thing to an authentic and historical gladiatorlike experience, do not miss the 653rd Kırkpınar oil wrestling festival held in Edirne, from June 16 to June 22

The Kırkpınar oil wrestling festival is a major national event that has been held in the start of summer since the mid-14th century. Hundreds of Turkish oil wrestlers compete in a variety of categories in what is the oldest continuously running, sanctioned sporting competition in the world. In addition to holding the Guinness World Record for being the longest running sports event in history, the Kırkpınar Oil Wrestling Festival was also added to UNESCO's Intangible Cultural Heritage List in 2010.

Although the sport of oil wrestling itself dates back to 2650 B.C. in ancient Egypt and Assyria, according to legend it was in 447, when Attila the Hun and his men entered Thrace and beat the Romans in a wrestling match as part of negotiations.

The first Kırkpınar festival is said to have been held in 1361. As the story goes, during the Ottoman expansion, Süleyman Pasha, son of the second Ottoman sultan, Orhan I, camped out in a village in the Eastern Thracian province of Edirne with 40 soldiers. The warriors paired off to wrestle; however, one duo was so evenly paired that they wrestled continuously for days, culminating in both dying of exhaustion.

The two soldiers were buried on the spot, and when the pasha returned the next season, the burial site had transformed into a lush meadow with numerous springs, and was thereby named "Kırkpınar," which translates to 40 springs in Turkish.

To commemorate the heroism of the expired warriors, a wrestling tournament was held annually at the site, making the event the oldest sanctioned sporting competition in the world. Oil wrestling, "yağlı güreş" in Turkish, was the national sport during the Ottoman era and "pehlivans" - the champion wrestlers - are considered to be heroes and attributed with virtues such as generosity, loyalty and respect.
Summer marks the start of nation-wide oil wrestling festivals; however, the Kırkpınar Oil Wrestling Festival held in Sarayiçi, Edirne is the doyen of all Turkish wrestling competitions.

Up to 1,000 contestants of all ages compete in a dozen categories, classed by height rather than weight, spanning from young boys to the chief pehlivan category. Matches are held simultaneously on the open grassy field of Sarayiçi Stadium.

The islet of Sarayiçi, which translates to "Inner Palace," used to be the Sultan's summer palace and was once the private hunting reserve of the Ottoman sultans.

Today, however, it continues to host the famous Kırkpınar oil wrestling competition. Wrestlers wear nothing but kneelength leather trousers that are called "kispet" and were once made of water buffalo hide and now calfskin. All contestants, even those who are just children, are doused head to toe in olive oil, and over 100 drums of oil are used for the tournament.

It is no surprise that the world's oldest annual sports event has maintained a number of symbolic rituals that begins with the lighting of candles with a red base that are hung in coffee shops in local villages and towns, as an invitation and sign of the start of the Kırkpınar festival.

The Golden Belt, the event's prestigious award, is carried through the city in a procession, followed by prayers recited at the Selimiye Mosque to kick off the sporting event.

The "peşrev" is another highly symbolic tradition of the Kırkpınar oil wrestling festival and is the contestants' warm-up ceremony, which is accompanied by "davul" and "zurna," a deeply resonating drum and single reed oboe.

A traditional repertoire ensues throughout the duration of the festival.Competitors greet each other with a series of ritualistic gestures such as grabbing each other's legs and hugging one another.

The bouts, fortunately, are no longer "to the death," and in 1975, a maximum 40-minute time limit was introduced to the chief pehlivan category, whereas in the past a match could go on for days before a winner was determined. If there is no clear victor, then the winner is determined in a 15-minute overtime period. Victory is achieved when one wrestler pins the other to the ground or lifts his opponent above his shoulders or if one of the contestants collapses.

If the winner is younger than his rival, he kisses the elder's hand. The last man standing receives the Golden Belt and the title of Chief Pehlivan. If the winner wins three years in a row, they then get to be the proud lifetime owner of the Golden Belt, which is made of solid 14-carat gold.

What also makes this event unique is that the local Romani population comes out in full force, setting up stands and creating a carnivallike atmosphere in the fairground's surroundings.

While in Edirne you can also check out the Kırkpınar Museum, which houses wrestling relics from centuries past, and visit the Selimiye Mosque, which was designed by Mimar Sinan and rivals Istanbul's famous Blue Mosque for having the most revered Islamic architecture in Turkey.
RELATED TOPICS