A day in the life of a villager 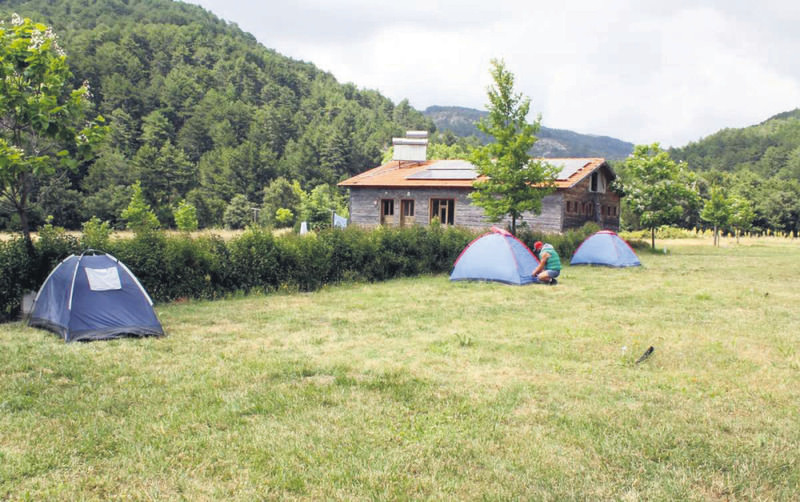 While most visitors to Turkey are well aware of the hustle and bustle of the ultimate urban lifestyle in the capital Ankara and cultural center of Istanbul as well as the beauty of the country's coastlines and tourist destinations, many do not get the chance to see another side of Turkey: Village Lifestyle

I have now lived in Turkey for more than a decade and have been coming to the country for more than 30 years; however, it wasn't until I moved to a village in Bodrum five years ago that I discovered this whole other wonderful side of Turkey that I have chosen to call home. I now live in a village in Ayvacık, a district in Çanakkale that has 64 villages, of which I am now residing in my third. In addition, my partner and I ran a tea garden in town when we first moved here, which also happened to be the house the Muhtar Association. A "muhtar" is an elected village head in charge of most village-related issues concerning safety, education, health and notification of public announcements, but I like to think of muhtars as Turkey's answer to a concept I'm more familiar with: A sheriff. Nonetheless, I served tea and toast to all 64 of them, and it allowed me the opportunity to visit many of their villages in what I like to call the "Hayır, Panayır and Düğün" season, which begins in spring and will be in full force until Ramadan.

A "hayir" (benefaction) is a form of expressing gratitude by preparing an offering of a meal to fellow villagers on occasions ranging from, but certainly not limited to, the birth of a child and sending a son off to do his military service, to commemorating a deceased loved one, building a home or basically any reason anyone feels the need to hold such an event. The meal served can range from a simple doughnut hole-like sweet called a "lokma" or a savory version known as "pişi," to a full-blown three-course meal including lamb or chicken served to the hundreds. "Düğün" (weddings) and "sünnet" (circumcision ceremonies) are certainly full-blown affairs usually lasting for days and take months of preparations. In all cases, villagers band together and share the workload, for instance, with women getting together to roll stuffed grape leaves and make bread – just to mention the very minutiae of the many tasks taken on by all. The men help with setting up the facilities and serving the guests, with all appointed helpers consisting of the closest circle of friends and relatives all donning a special towel around their necks to show they are of service. For weddings, in particularly preparations, are painstaking, as at least three different party areas are set up for the henna night, the night of the wedding and the arrival to their new home, which fellow villagers also help out in crowds to decorate.

The biggest feature in spring, however, is the arrival of the Ayvacık "Panayır" – a traveling fair held annually for four days and three nights starting on May 25 – which historically was a place to trade livestock and purchase all of your household and personal needs for the year. Set up on a massive 150 decare area, this merchandise and livestock fair sells anything and everything you could possibly imagine, including carpets, houseware, jewelry, shoes, clothes and the list goes on and on. It also has an amusement park, a dozen restaurants set up selling spit-roasted lamb and a whole area designated to overly friendly and funny Roma women hosting a light-hearted makeshift casino with coin and card games. Meanwhile, "davul" (shrill pipe) and "zurna" (a type of drum) groups beat their way through the crowds. This more than 100-year-old tradition is very much the most highly anticipated event of the year in this region in particular, and is rooted in the times of Oğuz, Türkmen and Yörük nomads.

Winter is also an exciting time for villagers, as camel wrestling season makes its way around the western and southern coastal towns. However, it certainly isn't "no work and all play," as olive season takes its toll in this region. Villagers spend the winter months picking and pressing olives. Food preparation is based on what is seasonally available, such as canning or preparing sauces and pastes out of tomatoes picked in August, and is also a major part of the daily village existence. They know what is best, when to preserve it and are rightfully proud of this skill as well as well aware that they are quite literally consuming the cream of the crop.

Every household makes its own cheese and churns its own butter, and fresh crops are picked and prepared daily with a heavy emphasis placed on vegetables and greens served during every meal. Traditionally, meals are shared sitting on the floor with a tray in the center and everyone dipping into a variety of dishes with their respective forks and spoons.

The weekly farmers market in Ayvacık is also a magnificent merchandise and gastronomical affair. The town is divided into areas set up to sell houseware, clothes, carpets and bells, rows and rows of colorful produce fill a huge covered lot, paralleled by rows of villagers selling their own prepared and picked goods, such as fresh milk, cheese, sauces, dried pasta, pastries and freshly-baked sourdough bread to name just a few. Women will also sell their various crafts such as rugs and embroidery, all which they painstakingly work on together at home during the week.

The women and men gather often in the village, with the latter going off to the village coffee shop and the former usually gathering in a spot with a view where they crack sunflower seeds and chat about the day's developments. In addition to most having near self-sufficient gardens, many village households will also have livestock as well as a herd of sheep, goat, cows or a medley that they care for greatly. They consume their milk and often will only give them up for slaughter in the form of a "kurban" (sacrifice) for one of the aforementioned forms of benefaction or for a wedding. All members of the family share the role of shepherd and each day will sometimes walk their herd for kilometers to give them access to huge green pastures. Other times the herds are set free to roam entirely on their own, only to return to the unique sound of their owner's call. In fact, the roads are often taken over at night by herds of goat, sheep and cattle that we have to seriously work to get them out of the road. On any given night, you may also see wild horses or donkeys on the road as well as foxes, weasels, turtles, frogs and owls – part of village life I love.

My other favorite part of living in a village is lighting a fire each night for our winter heating. Growing up in Los Angeles, I never dealt with heating and I certainly never learned how to build a fire. However, now after years of trying my hand at making Turkey's village life my own, I can say I have gained this basic life skill among many others, which my fellow villagers have kindly shared with me while introducing me to the intricacies of their community. They have always embraced me as an outsider and love to share their knowledge with others, in essence, to preserve this traditional lifestyle as their own youngsters grow up and go off to college or move to the city.
Last Update: Apr 01, 2015 3:02 am
RELATED TOPICS