Spring is in as the harvest festival season begins 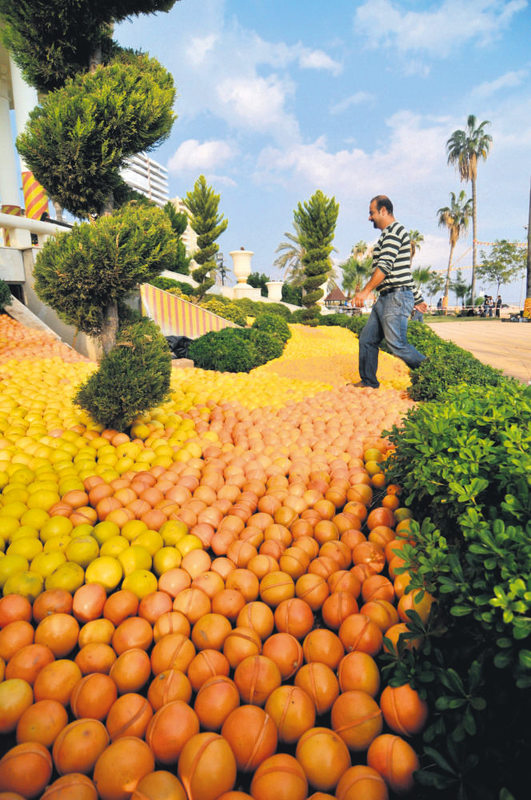 As flowers bloom in Istanbul with the arrival of spring, this country's wondrous offerings, from nature to agriculture, are being celebrated with traditional and colorful festivities

Turkey has been celebrating its bounty from both nature as well as its vast geographical area, which makes each gift that much more unique, for decades now with regional festivals that gain momentum in the spring. While the Istanbul Tulip Festival is impressive, there are a number of other unique festivals held in cities and towns throughout Turkey that offer the perfect excuse to discover regional delicacies and delights.

The Yeşilüzümlü Kuzugöbeği Mantar (Morel Mushroom) Festival, held in honor of the highly sought-after morel mushroom, commenced on Friday and continues through the weekend in the picturesque forested town of its namesake situated in the Taurus Mountains just 20 kilometers from Fethiye. The events planned include panels on the wide variety of mushrooms and how to gather, preserve and prepare them as well as a mushroom hunt accompanied by guides held in the ancient town of Kadyanda. In addition, there will also be a series of traditional music concerts, activities for children, a local textiles exhibition and a regional cooking competition.

Another is the 18th International Bayındır Flower Festival, which will be held from April 29 to May 3, in a town close to İzmir that is famed for being a serious worldwide producer of decorative plants. The streets of Bayındır will be lined with all sorts of colorful arrangements ushering in spring and their fragrance will waft in the air as more than 100 stands will be set up accompanied by concerts, contests, folk dances, kite flying, fireworks, seminars and regional culinary offerings.

The International Urla Enginar (Artichoke) Festival is a smaller-scale event held on May 2-3 celebrating the beloved artichoke in the picturesque coastal town of Urla, which is located on a peninsula off the Gulf of Izmir that is rightfully a destination worth visiting in and of itself.

The International Bandırma Kuş Cenneti (Bird Paradise) Culture and Tourism Festival will be held on June 6-10 in Bandırma, a lively university town in the Marmara region of Balıkesir province. This five-day affair, held annually since 1987, draws bird-watchers from all over the world and includes panels, exhibitions, track events and folk dances as well as bird watching in Bandırma's Bird Paradise National Park.

The Tekirdağ Kiraz (Cherry) Festival, a week-long festival that has just become a half-century old, will take place in the eastern city of Trakya, located just 135 kilometers from Istanbul, on June 10-17. An excellent day trip, this coastal town will be adorned with cherries and traditional garb, as a series of events are packed into each day including folk dances, traditional music concerts, cherry contests, sailing competitions and beauty pageants. The festival also spills onto the seaside, so you can take a dip in the Marmara Sea while feasting on cherries and be back in Istanbul by nighttime.

The Hermias Deniz Şenliği ve Balıkçılık Festivali (Hermias Festival of the Sea and Fishing) is a grandiose affair that takes place in Güllük, a small fishing town off of the ever-sprawling Aegean city of Bodrum. In the first week of July, the town takes on a carnival-like atmosphere with many big-name concerts and a variety of wonderful performances in commemoration of the sea and its offerings.

The International Kayısı (Apricot) Festival held annually in Malatya, on Aug. 13-17 this year, is a celebration of all things apricot in Turkey. With folk dances and many musical performances, this eastern Anatolian city will be offering every product imaginable, edible or otherwise, made out of, you guessed it, apricots.

The Traditional Urla Bağ Bozumu (Vine Harvest) Festivities held on Aug. 14 may be closer and just as pleasant, however, it is the International Ürgüp Bağ Bozumu Festival, which has been held on Sept. 12-13 in an ancient town in Nevşehir for more than 44 years, that transforms into a sort of Willy Wonka Chocolate Factory for grapes all among folk dances and mehter – Ottoman military marches. Exhibitions, performances and contests also spread to spots in Cappadocia in this special festival, where grape-growing has a history spanning back nearly 4,000 years.

The International Antep Fıstığı (Pistachio) Festival, held on Sept. 18-21 in Gaziantep, is surely worth planning a trip to as one of the oldest continuously inhabited cities in the world.

Another trip worth making in November is to Mersin, a magnificent city set on southern Turkey's Mediterranean coast for the Mersin Narenciye (Citrus) Festival as the city goes all out with traditional dress and performances coupled with streets lined with floats of lemons and oranges.

Near İzmir, however, Seferihisar Mandalina Şenliği, festivities held to celebrate the mandarin offer the perfect excuse to check out this stunning and serene coastal town. As the first town that joined the Cittaslow movement in Turkey, Seferihisar is easy on the eyes and its local foodies go all out to make their citrus displays and culinary delights absolutely lovely.
Last Update: Apr 11, 2015 1:50 am
RELATED TOPICS