Get your feast on at 101 tastes of Istanbul 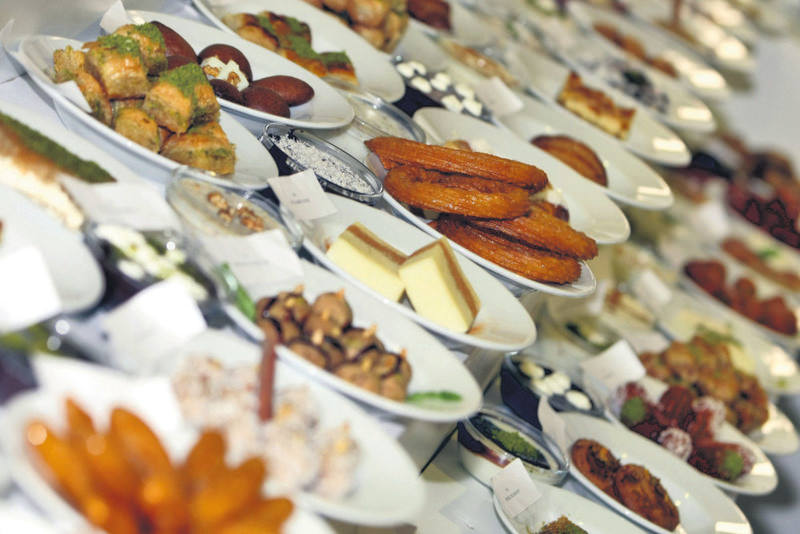 Discover the vast offerings this city's culinary scene has to offer at the not-to-be-missed 101 Tastes of Istanbul Festival held at the Sait Halim Pasha Waterfront on Sunday, April 26

This Sunday, Istanbul's own installment of the indispensable expat reader's companion all over the world, Time Out magazine, wıll host the third annual 101 Tastes of Istanbul Festival (101 Lezzet Festivali) at the Sait Halim Pasha Waterfront in Yeniköy, one of the most beautiful historical villa complexes set along the Bosporus. Every year, the city's cream of the crop in cuisine, as selected by both the Turkish and English versions' expat and local readers, set up stands and tastings to introduce their creations. With stand after stand of new and traditional tastes by trending and classic restaurants, this event is the perfect opportunity to check out all of the restaurants you may have heard of but not yet had a chance to be a patron of all in one mega-feasting day.

This year's festival is expected to be the largest yet, set in a new stunning historical setting, the Sait Halim Pasha Waterfront in Yeniköy. Get your taste buds ready to explode as you check out the city's wide array of culinary offerings, spanning street food, fusion to fine dining and its happening foodie scene set all the while against the backdrop of the Bosporus and within the walls and grounds of a lavish Ottoman palace all to a live soundtrack of the grooving tunes of Funk Efendi. Tickets for this gastronomical extravaganza are available on Biletix, and the event kicks off on Saturday at 1:00 p.m. with doors open until 10:00 p.m.Located in Yeniköy on the European shore of the Bosporus, the19th century Sait Halim Pasha Waterfront complex includes an impressive Grand Hall, the obligatory Haremlique and Selamlique and landscaped grounds bordering the sea. Although valet parking will be available, it is advised to leave your car at home. Main sponsor Renault will be offering shuttle services every half hour from the Maslak Metro stop and a motorboat ride from Beykoz to Yeniköy, which takes less than 10 minutes and sets off every 20 minutes, is the ultimate way to arrive in style. Be forewarned, this is an adults-only foodie event, and thus, no one under the age of 18 will be allowed into what may be Istanbul's biggest culinary affair. It is basically this one day a year when the city's top venues for traditional Turkish classics, new fusion and international fare come together all under one roof for the ultimate eating experience of your life. It is also the perfect time to try all of those restaurants and their specialties that you have heard of but not yet had the opportunity to frequent. Some of Istanbul's top fish, meat and meze restaurants will be setting up stands. Pandeli, an Istanbul classic since 1901, which has hosted the likes of Queen Elizabeth and Mikhail Gorbachev, will be on hand, as will Develi, another fine-dining Turkish establishment, which has been in operation since 1912. The beloved Bostancı fish restaurant Cunda Balık will be on hand, as will Kaşıbeyaz with kebabs and katmer. Fasuli will be serving up "kuru fasulye" (beans) and Emek Mantı Evi will be dishing up classic and creative variations of the traditional Turkish dumpling.

Some of the more hip and happening culinary fusion restaurants on the bill include Lucca and Cantinery, Mest and Karaköy's Colonie and Rudolph, whose chef is a Dutch expat who has made Turkey his home for over 20 years. Christian Sandefelt, co-founder of London's popular pop-up restaurant, the Disappearing Dining Club, will also be appearing for a special seated tasting in the Hunting Room joined by Swedish chefs David Gard and Johannes Dahlström.The 101 Tastes of Istanbul festival also provides the perfect opportunity to try the fine dining options the city's most accommodating high-rise hotel selection has to offer. One is the Ace Restaurant and Lounge in the AvantGarde hotel in Levent and Taksim, the Armada Hotel in Eminönü and The Arts Restaurant and Bar 212 from the Renaissance Istanbul Bosphorus Hotel in Beşiktaş, as well as the Four Seasons, which will all have stands with tastings of their specialties. Tapasuma is officially the best tapas restaurant in town and situated in the pristine Sumahan on the Sea, which is Istanbul's most luxurious Bosporus spa and hotel.

Other highly sought-after fine dining experiences will include Chinese specialties from Shang Palace housed in Shangri-La Hotel in Beşiktaş. The city's top Indian restaurant, Dubb, will be there, as will Çok Çok Thai, for the best authentic Thai food in the city. You can get your Mexican fix with TacoFit, and for a walk on the wilder side, try Asuman for Persian fare and Gaya for Korean.

If its comfort food your craving then search no more, as you can get your corn dog from Carnaval, pizza from my stateside favorite Upper Crust Pizza, burgers and malts from Shake Shack, Virginia Angus or Eat Box, which also offers coconut water. There will be sushi galore by SushiCo and Yada Sushi as well as stands set up by the Le Cordon Bleu cooking school as well as by famous and beloved in international gourmet staples such as Tobasco sauce, Maille mustard and Lindt chocolate.There will also be vegetarian and vegan options such as Parsifal and Bi-Nevi as well as smoothies and fresh juices by Erenköy Şerbet, Juice LA or Youssu. You can have your frozen yogurt fix at Pinkberry and try gelato by Cremerie Milano. Take your pick of French pastries from Melia Patisserie and Pastel or try a raspberry or chocolate version of tres leches cake from Trileçe. Last, but not least, Turkey's finest sweet maker of hard candies, marzipan and Turkish delights, Haci Bekir, will also be on site.

Istanbul's new specialty coffee shop explosion will also make its mark on this year's festival with a series of happening spots serving up their hippest methods of brews. To name just a few there are Turkey's in-house resident Kurukahveci Mehmet Efendi, which will compete against the likes of serious brewers Kronotrop, Brew Lab, CoffeeNutz Coffee Roasters, Coffee Sapiens, Petra Roasting Company and Walter's Coffee Roastery, named after none other than the infamous title character from "Breaking Bad." The ultra-popular Dem teahouse will also be serving up dozens of aromatic and cleansing concoctions. You can check out photos of each of the venues as well as their menus and reviews on zomato.com, albeit in Turkish, an excellent resource on the best restaurants in the city.
RELATED TOPICS