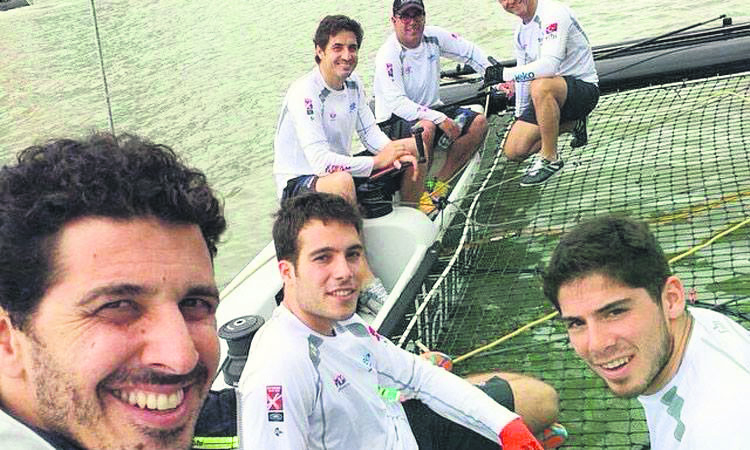 Team Turx, Turkey's first-ever representatives in the Extreme Sailing Series, which takes place in eight different countries over a period of 11 months, is now in China to compete in Act 3 being held in Qingdao from May 1 to May 3

Did you know that Turkey now has its own team competing in the Extreme 40 Sailing Series? If not, it's high time you met Edhem Dirvana and Team Turx, which are making waves and winning trophies, as the first team from Turkey to compete in what is one of the toughest sailing races in the world. The Extreme Sailing Series (ESS), regularly referred to as the "Formula 1" of the sea, is an intense adrenaline-heavy stadium sailing competition amongst eight teams consisting of the world's elite sailors that takes place over the course of 11 months in eight different countries on three different continents. Competing with Extreme 40s, a 40-feet-long scaled up version of the Olympic catamaran, unlike other races the ESS is not based on distance: It is speed that counts. Imagine navigating waves and gushes of wind and eight other catamarans for an audience on shore in various cities all over the world. The Third Act, which kicked off in Qingdao, China, on Thursday with press conferences and races scheduled to start Friday, will be an especially exhilarating event with skyscrapers surrounding the stadium set up on Fushan Bay.

I had the chance to meet Edhem Dirvana and Can Bayülken from Team Turx at the Winds of Peace Dinghy Festival, which took place on the Gallipoli peninsula in honor of the 100th commemoration of Anzac Day and the Battle of Çanakkale last weekend. For the event, a special series of a dozen wooden dinghies, replicas of the versions used in the 1900s, were transported from the Tuzla Yacht Club by truck to the Gallipoli Peninsula, and sailors from the nations that fought on the battlefields sailed together in this very special event to promote peace and friendship and shared values beyond this historical battle.

From there, the team set off for China where it will compete in the third Act of the Extreme Sailing Series, which kicked off in Singapore in February. This, however, is just a continuation of their journey of firsts, which began with their first invitational run in Istanbul's first-ever Extreme 40 syndicate. In Act 2, held in Umman, March 11-14, the team saw unprecedented success, taking first place once, second place four times and twice coming in third while ranking fifth in the standings and winning the Land Rover Above and Beyond trophy for their high starting statistics and fast improvement. After China, Act 4 will take the team to the U.K.'s Cardiff Bay in June, Hamburg, Germany, in July, Saint Petersburg, Russia, in August and then back to Istanbul Oct. 1-4 with the series concluding in Australia in December.

It's impossible to not be excited for this team of impressionable and successful sailors from Turkey that is going the distance and doing so many wonderful things both in Turkey and abroad. Dirvana, the charming, tall and handsome captain of the team comes from a long legacy of Ottoman leaders and a sailor father who was also one of Turkey's legendary surgeons. His parents discovered the sailing paradise of Bozburun Peninsula located across from Symi and parallel to the Datça Peninsula in Marmaris where they built their home, which would later, become Edhem's beautiful Bozburun Yacht Club. This very special, prestigious and tranquil sailor's haven and boutique hotel and restaurant has a dozen or so beautifully decorated rooms with stunning views and some with private beaches and pools and a restaurant serving up exquisite locally-sourced meals.

It was here where Edhem formed Team Turx and began training in Bozburun on his own Formula 40 catamaran that also happens to be the very same one featured in the film "The Thomas Crown Affair." While Edhem and the Bozburun Yacht Club are a story on their own, to only further attest to the charisma of this 38-year-old athlete, who also studied in the States, Edhem also starred in a feature film, the 2012 romantic comedy "I Don't Like Sundays At All" (Pazarlari Hiç Sevmem).I asked Edhem how it feels to sail for Turkey at this sort of international level to which he told me, "Well it feels great to be representing my beloved country at such a high profile event. As the pinnacle of the sport, the Extreme Sailing Series is a huge challenge but nevertheless it is that much more rewarding." As for being the first team from Turkey to compete in the ESS, Edhem said: "As a team we are extremely proud to be paving the way for a new page in Turkish Sailing. This is a step towards improving our maritime culture and the awareness about its potential within our beautiful waters."

For the third leg of the Extreme Series held in China, world-class multihull sailor Edhem is joined by Mitch Booth, his son Jordi Booth, Brock Callen, the only American in the series, Portuguese sailor Pedro Andrade, Selim Kakış, a national sailor for Turkey and Can Bayülken.

As for Can, who if it's even possible is just as handsome as Edhem and a recent graduate in Civil Engineering from Istanbul Technical University, he has also been involved in sailing since he was a child and like Edhem, developed his love for the sea by spending time on his father's boat. He began his sailing adventure in the optimist class at the Istanbul Sailing Club and was then introduced to the catamaran in Bozburun in 2012. He's also a bright, outgoing character who has already ranked in the teens internationally and 11th in Europe. Can was also part of the Winds of Peace crew in Çanakkale where he shared with me how proud he was to be able to represent his country at this level and said, "We are going to continue to try to get the best results."
Last Update: May 01, 2015 10:27 pm
RELATED TOPICS