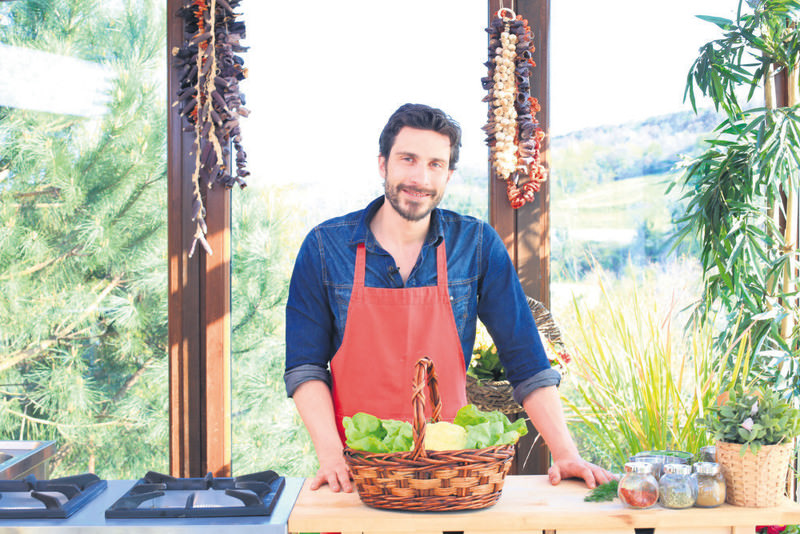 Ray Rizzo is an American expat who has a lot going on. A popular resident Istanbul yoga instructor with his very own ‘Weightlessness' style and accompanying book and DVD, Ray Rizzo takes the city by storm at night with his lyrical stylings of rap and hip hop, and soon will be the host of his very own food program called Ray'ın Çiftliği,(Ray's Farm) on Turkmax Gurme

I first heard about Ray Rizzo, a 34-year-old Adonis-like yet spiritual and sensitive yoga teacher who hails from New York, from Istanbul yoga circles and then caught the thrill of seeing him take the stage with another Istanbul expat resident and vocal goddess Aussie Aysu Çöğür, in what was a high-quality performance and an exhilarating night out. Nevertheless, teaching yoga and rapping are just a few of the many branches on Ray Rizzo's tree. This multifaceted and multitalented fellow American expat is also a martial artist, massage therapist, author, poet, farmer and cook and will soon be able to add television personality in Turkey to his list.

I had the chance to talk to Ray about his expat experience in Turkey and all of the wonderful things he has been up to. Hailing from Woodstock, NY, a place famous for artists and musicians, Ray Rizzo later spent significant time in New York City as well as travelling all over the world. Like most Americans, he says he is also of mixed descent, with his father's side hailing from Southern Italy and his mother of English, Dutch, and Norwegian blood. When he first came to Turkey nearly a decade ago, he was living in Spain at the time and came to visit a friend. "I thought I was coming for four days, now it's been almost 10 years," Ray tells me.

Ray Rizzo has been teaching yoga for more than 15 years and is the author of "Weightlessness-Integral Exercise: Yoga, Pilates and Chi Kung," a book and DVD of his unique fusion of movements from the martial arts, yoga, pilates and bodywork disciplines released in English and Turkish. This descriptive and informational guide also focuses on nutrition, breathing and metaphysics.

Ray is a graduate of Dharma Mittra's advanced 500-hour program and recognized by the Yoga Alliance as an ERYT-200, which means he is approved to train other teachers. He is also certified in pilates, licensed in massage therapy and holds a degree in Consciousness Studies from State University of New York where he worked closely with Stephen Larsen studying the works of Joseph Campbell.

Ray teaches yoga at Mars Athletic Club and also holds occasional workshops and seminars such as a special upcoming Hatha Yoga session on May 30 at Aletya, a boutique yoga studio in Zekeriyaköy and his Weightlessness Hatha Yoga Intensive and Renaissance Arts Retreat from June 22-June 28, which will be six days of yoga, meditation and learning about the healing arts set in the picturesque and tranquil Kabak Valley in Fethiye.

I asked Ray if he developed or wrote his "Weightlessness" program in Turkey to which he explained that a lot of the inspiration for his book came from time he spent in the Amazon working with traditional healers. He also did some of the outline while in India, but for the most part he says, "Yes, I wrote most of the book here, that was just before my son and daughter were born. I'm glad I got it done. Now that they're seven and six, I can get back to writing again."

Ray is also a published poet with his second book released in English, "Bones of Joy: Selected Verse." A veteran of the New York spoken word scene, he has even graced the famous CBGB stage in New York. His debut album "The Mystery" released under the alias "Ferryman" in 2013, topped Turkish hip-hop charts and was a collaboration with songwriter Simone Felice and David Baron, who has also produced albums for the likes of Michael Jackson and Lenny Kravitz. Ray aka Ferryman performs regularly in Istanbul venues with the expat-popular Mama Shelter being a heavy-hitter and will soon be launching a free EP called "Dirty East." You can also check out his Turkish-infiltrated lyrical stylings in a fun reworking of Jay-Z's "Empire State of Mind" into "Istanbul State of Mind" that's definitely worth a viewing.

"This summer I'll be recording new songs in Woodstock with some great producers. One thing I enjoy about teaching and also being a hip hop artist is breaking people's expectations. Sometimes I feel a bit like Nasreddin Hoca. I don't take myself too seriously, and perception is not always reality. This is also a Sufi way of teaching. But the goal is liberation, freedom. That's why my book and yoga is called 'Weightlessness,'" explains Ray while posing the question, "You know what the 11th commandment is? 'Thou shall not take thyself too seriously.' I really enjoy being someone that's hard to pin down," explains Ray, who is most certainly a bird that continues to fly new horizons. "I love to make stuff. Once it's done, I usually move on," says Ray but it's the wisdom he shares that "Yoga teaches you that you work for the work's sake," that especially resonates with me.

Ray Rizzo is also a serious foodie with a pre-yoga sous chef-past who never lost his passion for cooking. He lists all of the wonderful dishes he loves in Turkey such as olive-oil based and home cooking dishes, meze and grilled fish to name a few. "I think Turkish and Italian foods are the only cuisines I can eat every day and not get tired of," Ray says. Before he got his own farm, he used to spend every weekend in Belgrade Orman walking, collecting mushrooms and getting fresh air. Now, he grows his own beautiful organic veggies and will soon be sharing his experiences with viewers on a brand new food show called "Ray'ın Çiftliği" that will soon air on Turkmax Gurme and will focus on organic gardening and simple, healthy food.

When I asked Ray what drew him to Turkey a decade ago, he explains, "Those were the Bush years and part of me wanted to escape the political situation in America. There are all kinds of people in the USA, just like anywhere. However, I've always felt comfortable around more traditional people. I love to go to farms and villages and be near people who live in an ancient way. They keep it real. So, I was curious. Then on my third night in Turkey, I met my wife, she's French/Cambodian but has been here close to 20 years. You know the saying opposites attract? We couldn't be more different, but we share a common sense of humanity and hospitality, something we also share with many Turkish people."
Last Update: May 12, 2015 11:56 am
RELATED TOPICS