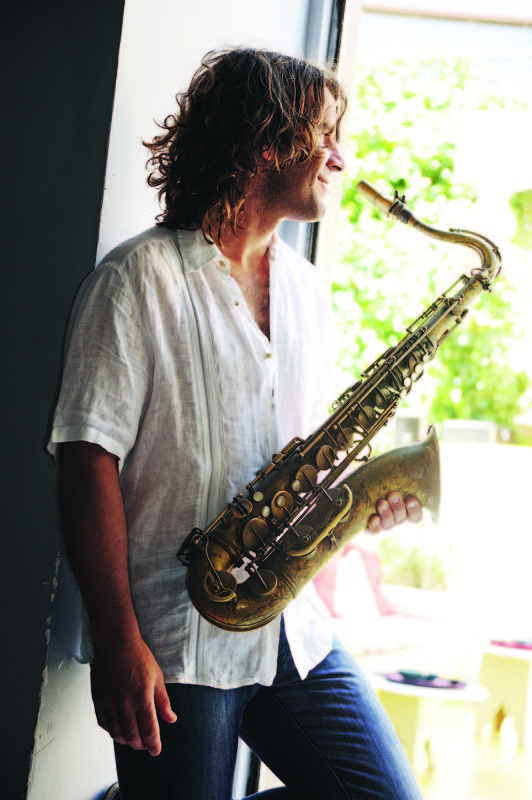 İlhan Erşahin and his club, label and festival trifecta, Nublu, is changing the course of jazz in the 21st century. You can catch this innovative musician perform at two very special festivals held this May in Turkey

Born to a Swedish mother and Turkish father, İlhan Fredrik Erşahin is a tenor saxophonist, composer, music producer, club and label owner and festival organizer based in New York. The influence of his Turkish heritage shows in his vast volume of work, and he certainly hasn't left his father's native country behind. While becoming a household name worldwide for his unique Nublu "sound" – Nublu being one of the leading jazz and world music improvisational venues – İlhan also plays regularly in Turkey and even has a branch of the popular Nublu jazz club here in Istanbul (in addition to one in New York). This weekend, İlhan performs at Cappadox Festival, a three-day gastronomical, nature and music extravaganza, and at the end of the month, his Nublu and Istanbul Sessions will be taking part in a very special picnic-themed festival at Küçükçiftlik Park.

I had the opportunity to talk with İlhan about Turkey, his Turkish heritage and upcoming projects. Well-known in Turkey, especially for his collaborations with some of the country's most beloved musicians, such as clarinetist Hüsnü Şenlendirici and eclectic musician Mercan Dede, İlhan has actually never lived here full-time. Growing up in Stockholm, İlhan explains that he used to come to Turkey "every single summer." "We as a family used to go to Çeşme and then we switched to Bodrum." As for his musical start in Turkey, İlhan said, "My musical connection with Turkey began in 1994 when I was invited to play at the Akbank Jazz Festival. After that, I started coming more and more. I used to run jam sessions for the Istanbul Jazz Festival and the Akbank Jazz Festival, which let me really get inside the Turkish music scene. And in the last 10 years, I have probably come almost once a month. It's crazy travel but somehow I got used to it."

In 1998, İlhan formed Wax Poetic, a project incorporating spoken word, DJs and electronic elements as well as Norah Jones on vocals. Just a few years later, in 2002, he opened the now-famous club Nublu in New York's lower East Village as a venue for musicians, mostly his friends, to have a place to improvise well into the night. By 2005, these jam sessions led to the formation of Nublu's own record label and multiple projects with "Istanbul Sessions," "Wonderland," "Love Trio," "Nublu Orchestra" and "I Led Three Lives" being just a mere few. In 2009, the Nublu Jazz Festival was launched, which continues to be held annually in New York, Istanbul and Sao Paulo, where the most recent one took place in the final week of March.

Nublu, which changed locations this year in both New York and in Istanbul, continues to be an East Village landmark, reigniting the jazz spirit of this neighborhood that thrived in the beatnik years of the 1940-50s. However, what started as İlhan and his friends seeking a space to jam has now resulted in the creation of their very own sound; a fusion of a variety of musical forms, such as electronica, dub, trip hop and world music with jazz improvisation. The new Nublu spot in New York on Avenue C is a two-story space with one level dedicated to live performances and the other to a lounge and a recording studio. Nublu's Istanbul location moved this year as well, to Beyoğlu, its third location after spells in Kuruçeşme and Karaköy.

I asked İlhan how Turkey and his Turkish heritage have influenced his music, to which he responded, "It has influenced me lots, I think that's why I decided to start my two Istanbul projects: Wonderland and Istanbul Sessions." Wonderland is perhaps his most serious venture into Turkish sounds, joined by Şenlendirici as well as vocalists Nil Karaibrahimgil and Bora Uzer. Istanbul Sessions is a collaboration between İlhan and esteemed Turkish musicians – bassist Alp Ersönmez, drummer Turgut Alp Bekoğlu and percussionist İzzet Kızıl. İlhan told me they have a new album coming out called "Istanbul Underground," and said, "We just finished mixing the album and I'm very excited about it. It's coming out in October in Turkey, Europe and Japan and in January in the U.S. And yes, we are hoping we will get lots of shows."

On May 16 at 10:00 p.m., İlhan will perform with his Wonderland outfit, featuring trumpeter Nils Petter Molvaer, on a spectacular stage set up among the fairy chimneys in Uçhisar for Cappadox – a first-of-its-kind festival being held in Cappadocia this weekend combining music, art, gastronomy, sports, history and nature. But don't fret if you can't make it to this very special event. Thanks to the Solar Powered Streaming Stage set up for the festival, all of its pop-up acoustic concerts by international performers will be broadcasted live over the Web.

On May 30, İlhan will also perform live with his Istanbul Sessions group for another very special outdoor festival, this time in Istanbul. Ilhan's Nublu is actually one of the organizers of the "Güzel Bir Gün" festival – a picnic-themed event held at Küçükçiftlik Park, which will combine concerts by performers affiliated with Nublu and Mini Müzikhol with workshops spearheaded by Karaköy Souq and a series of serious foodie stands, including Datlı Maya, Upper Crust, Texas BBQ and even Korean fusion.

From there, İlhan returns to New York, where he regularly performs. However, in July, he sets out for a series of shows all over Europe to play with pianist and producer Bugge Wesseltoft's new band Bugge and Friends, a seven member jazz group consisting of İlhan, Erik Truffaz on trumpet, Joaquin "Joe" Clausell on turntables and beats, Erik Holm on percussion, Andreas Bye on drums and Marius Reksjo on bass. "That record is actually being released today!" İlhan excitedly informed me.

I asked İlhan what else was on the horizon to which he shared, "I just finished mixing another new project called 'Silver.' It is a cinematic, atmospheric jazz project. Moods and calm vibes only, and no energetic solos, etcetera. On that recording, I'm playing more keyboards then saxophone. That record is coming out in the fall. It's with jazz legends Eddie Henderson and Juini Booth and my buddy and great drummer Kenny Wollesen."

Needless to say, Ilhan continues to collaborate with revered musicians from all over the world. In addition to his Istanbul-based outfits, he has also worked with many Brazilian jazz musicians from Rio de Janeiro and Sao Paulo. Seeing him in Turkey, however, is something special, and Istanbul is

fortunate to have a branch of the Nublu network now conveniently located on Sıraserviler Caddesi – the street where Taksim and the expat Mecca of Cihangir meet.

I asked İlhan where some of his favorite places in Turkey are, to which he said, "Some neighborhoods in Istanbul. Of course, Çeşme and Bodrum when it's not too crowded … İzmir is cool too. Ankara is a mystery to me, but the audience is always great in Ankara." Having grown up abroad to a Turkish father, I asked İlhan how his Turkish was, which he explained, "It's ok. When I'm in Turkey, I never speak English. It's not perfect at all, but I feel it's still getting better and better. When I grew up, Swedish was the main language in my family. So, I didn't really grow up speaking Turkish."Ilhan's music surpasses the boundaries of language and state borders, yet he is known worldwide for his Turkish influence. At the age of 49, this hunky, long-haired saxophonist is already a jazz legend unlike any of his kind, and his Nublu brand has become a reference to its new, genre-transcending, multinational sound. We are lucky to have him grace Turkish stages this month at two very unique and spirited events. İlhan is well-suited to these innovative festivals, which in themselves will be blurring the lines of music, art, yoga, food and ultimately, culture.
Last Update: May 13, 2015 12:11 am
RELATED TOPICS