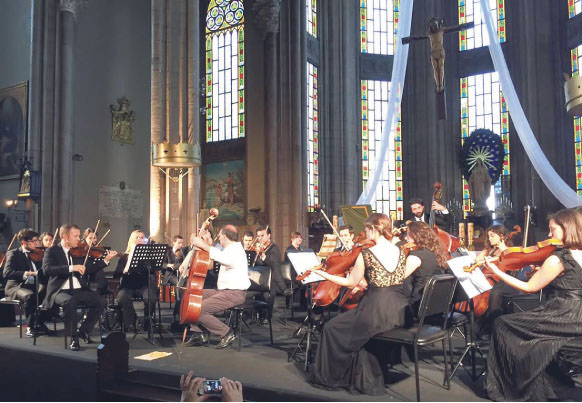 Starting in July, Turkey's prominent and promising classical musicians will be taking part in a series of expert master classes and performances in an extraordinary setting at the Aegean seaside resort of Ayvalık as part of the Ayvalık International Music Academy master class series and the AIMA Ayvalık Music Festival, which will be held from July 8 to July 10

Every summer, promising young musicians from Turkey and all over the world are given the opportunity to learn and perform in a series of master classes taught by a distinguished international faculty of leading musicians in their field at the Ayvalık International Music Academy (AIMA). Situated in a stunning seaside villa in the beautiful Aegean coastal town of Ayvalık, located in Balıkesir province, the AIMA also holds an annual Ayvalık Music Festival - this year will be the third - that will take place on July 8 and is held in a 15th century cathedral that is now the Taksiyarhis Memorial Museum, making this the perfect time to discover this popular and quaint Aegean town.

The Ayvalık International Music Academy was founded in 1998 by Prof. Filiz Ali, who has a lengthy list of musical accolades herself and is easily one of Turkey's most prominent musicologists, critics and educators. After graduating from the Ankara Conservatory and winning a Fulbright to study at the New England Conservatory of Music and New York's Mannes College of Music, Filiz went on to receive her graduate degree in musicology at London University's King College. For over two decades, she was the musicology department chair at Mimar Sinan University and ran the Cemal Reşit Concert Hall. For three decades she was an integral part of TRT's - the state-run radio and television station - musical shows and for many years served as a music critic for some of Turkey's leading newspapers. She has also authored seven books on music and musicians in Turkey and currently serves as the director of AIMA as well as its founder and executive board chairperson of the Ayvalık Culture and Arts Foundation.

I had the unique opportunity to talk with Prof. Ali about AIMA and this year's summer program, which kicks off in July. Filiz Ali said that when they initially envisioned establishing the Ayvalık International Music Academy, their vision was to simply organize one 10-day master class session each year. "However, as the years passed, both our master classes and events grew and were spread throughout the summer. Ever since then we have presented the opportunity for hundreds of young Turkish and foreign musicians to work with internationally acclaimed masters," she said. "In 2013, as part of the 15th anniversary celebration of AIMA's founding, we envisioned gifting Ayvalık a music festival," says Prof. Ali, adding that the orchestra consists of 20 young musicians selected amongst over 500 musicians that have participated in one of AIMA's master classes. Their first concert was held in June of 2013 within the framework of the Ayvalık Music Festival and in the impressive surroundings and acoustics of the Taksiyarhis Memorial Museum. "Over 500 music-lovers came out to the concerts, which were also broadcasted live online," she tells me, adding that in 2014 there was even a professional DVD filmed of last summer's concert series.

In 2015, Filiz explains, "I witnessed the appreciation of our success when both the Ayvalık International Music Academy and myself were presented the IKSV Honorary Award at the opening ceremony of the Istanbul Music Festival." On May 31, 2015, the Istanbul Foundation for Culture and Arts (IKSV) awarded Filiz for her contribution to Turkey's arts and culture through her work on the development and proliferation of polyphonic western music and her valued efforts in training countless musicians and musicologists over the past 50 years through her role as an educator. Filiz continues to teach at Sabancı University, offering courses on classical music greats and the best works from the 20th century, while also teaching at the musicology department at the Mimar Sinan Fine Arts University State Conservatory.

If you are a classic music lover, then Filiz Ali and AIMA's efforts to perpetuate the study of classical music amongst young performers and to give them the opportunity to perform with some of the greatest musicians on stage is a unique opportunity to celebrate this musical style and its development in Turkey. However, this is also the perfect excuse and an opportune time to discover Ayvalık, while enjoying the worthy efforts of leading and promising classical musicians. There will be an opening and closing concert as well as a chamber music performance on the roster. Meanwhile, throughout the summer, there will also be final performances following a series of master classes held by prominent musicians for up-and-coming performers. Either way, you can ensure you will experience top-notch classical music performances in a series of very special and sacred spots.

I asked Filiz to describe who the students and teachers were on a broad scale, to which she explained that any students studying an instrument at a conservatory or at a music school of its equivalent from Turkey or abroad can apply. "Our teachers and students come from a variety of countries such as Germany, Russia, Greece, France, England and, of course, Turkey. Foreign teachers tend to teach their courses in English, in which case, if necessary we provide translation," says Filiz.

The performances are held at the Ayvalık Taksiyarhis Memorial Museum, a stunning setting in itself to visit and hear the fine tunings of some of the finest classical music around, as the space is a recently renovated 15th century Greek Orthodox cathedral. The AIMA building, set in the heart of Ayvalık overlooking the sea, also doubles as a retreat for any artists, writers and creative individuals who want to experience a peaceful and inspiring atmosphere on the sea to pursue or accomplish the work they love. This early 20th century art deco seaside villa has four double and two single bedrooms, and the space is equipped with three baby grand pianos, two upright pianos, two clavinova's, all of the accoutrements to perform chamber music as well as film projectors and screens on hand.

With views overlooking Cunda Island, this very special retreat venue is ideal if you are also of the creative persuasion and want to take time in a special space that has inspired countless, while also discovering this seaside town and its archipelago of islets. A five and a half hour drive from Istanbul, Ayvalık is also regularly frequented by plane and bus services. It is the ideal destination to combine with a trip to Assos or Izmir and also serves as a gateway to the majestic Greek island of Lesvos, which sits right across the mesmerizing Edremit Bay.
Last Update: Jun 30, 2015 7:45 pm