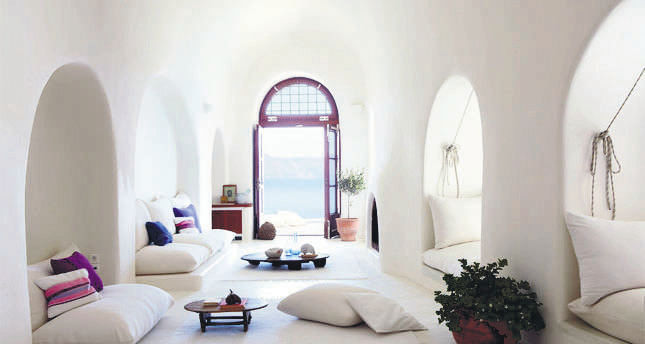 One of the most surprising characteristics of the Greek marriage arrangement is that the family of the bride takes on the duty of building or buying a house for the married couple to move into.
by Leyla Yvonne Ergil Jul 16, 2015 12:00 am

Weddings held by Greeks are large, joyous, familial affairs oddly similar to those in Turkey. However, there are a few key variations in customs and rituals that differ from the traditions in Turkish weddings, an examination of which can offer insights into both just how close Greek and Turkish cultures are, and the nuances of just how much they differ

It is soon to be wedding season in Turkey as the month of Ramadan comes to a close with the start of Eid al-fitr this Friday. And it is no different with our neighbors the Greeks, who like the Turks, have a series of ingrained rituals, superstitions and traditions that have been passed down from generation to generation since antiquity, and that are still to this day incorporated into the wedding experience.

Most Greeks are Greek Orthodox Christians and follow the guidelines dictated by the Church. As is the case for Turks, there are certain times of the year when Greeks absolutely do not hold wedding ceremonies, such as in the first two weeks of August, which is devoted to celebrating the Virgin Mary as well as in the 40 days preceding both Christmas and Easter.

The dowry of a lifetime

Like the Turkish Çeyiz, the Greeks also have a deeply ingrained dowry system, referred to as "Proika," which is gifted by the bride to the household upon union and could range from household items such as linens and appliances to a house, shop, land or even a car.

One of the most surprising characteristics of the Greek marriage arrangement, contrary to Turkey and most places in the world, is that in addition to providing a dowry, the family of the bride takes on the duty of building or buying a house for the married couple to move into. Drahoma is the Greek equivalent of what in Turkey is referred to as "başlık parası." However, instead of being handed over by the groom's side for the bride's hand in marriage, in Greece, it is the bridal party that makes an investment into the marriage's future. The "Drahoma," which is agreed upon prior to the wedding, is a long-standing tradition of setting up the newlyweds for a successful marriage, while ensuring the bride financial security for life should the union fail.

This tradition, which had virtual legal standing up until its abolition in 1983, and is for the most part quickly diminishing, still lingers culturally as an integral part of the deciding factor for nuptials. This custom of the Greek bride being societally responsible to provide a home, land or even a place of business, is the complete opposite to the custom in Turkey, still very much prevalent in villages, of the groom's family providing a home for the marrying couple.

The Greek tradition of the bridal party providing a major investment of some sort, which could span from outfitting a home or the building or purchasing of a house itself, a shop, land or livestock, was very much considered a status symbol and the key to creating a loving home and ensuring the husband did not stray. Families of all social statuses would go to great lenghts to ensure their bride had a worthy Drahoma, even so far as to go into debt.

Families would rally together to ensure the male siblings wait to wed until their sisters, preferably in order of seniority, would even be sent abroad to ensure the family could offer their bride the best possible dowry and Drahoma in marriage. This system not only created an inequality for lesser-off brides, but also was considered a factor in population decline due to delayed weddings as a result of men waiting to be offered the perfect dowry and women working in their prime in pursuit of acquiring it.

Nonetheless, the tradition of planting a special wedding flag, which also persists in rural areas of Turkey, is also practiced in Greece at the bride's home, whereas here it is just the opposite. However, like the case in Turkey, the bride's family and friends are in charge of prepping the home for the newlyweds. One particular custom of interest is that the bride's single friends are tasked with making the bed, which the groom must then approve. The first to get a pillowcase over the pillow is believed to be the first to get hitched next. Then money to symbolize prosperity and rice for putting down roots are thrown on the bed. The most peculiar element of the custom is that a baby is then rolled on the bed to bring fertility. Superstition also has it that the gender of the baby rolled across the bed will also be the gender of the couple's first-born.

While the groom is shaved by his best man, the bridesmaids will inscribe their names on the bottom of the bride's shoes, which, like her dress, should be purchased by the groom, in order to determine who is to get married next. Some say the names that have faded are the next in line to get hitched, while some believe the names that fade the least will next become a bride. In another variation, bridesmaids will write down the names of three eligible bachelors and the one remaining is believed to be who she is to marry.

The tradition of the veil prevails in Greece, whose ancient ancestors started the custom to begin with based on the thought that the veil protected the bride from evil spirits. The Greeks, like their Turkish neighbors, are a superstitious bunch and believe in the "evil eye." However, the way they exercise this belief is certainly unique. Spitting, or more appropriately, pretending to do so, three times after a compliment, especially of the bridal gown, is considered a surefire way to make certain things go smoothly.

The bride will also pop a cube of sugar in the glove she wears as she walks down the aisle in the hopes it will guarantee a 'sweet' life and may place a gold coin in her shoe for prosperity. The groom on the other hand, can carry a piece of iron in his pocket to ward off evil spirits. Meanwhile, it is also believed the number of bridesmaids and other critical calculations should always be an odd one in order to ensure nothing is jinxed.

The rituals in place in a Greek Orthodox wedding ceremony are done in sets of threes to symbolize the Trinity and include crowns, candles and a communion cup. There is the tying of two wreaths to symbolize golden crowns and the ruling of a household together. Candles are lit during the ceremony by the bride and groom who also take three sips each from a communal cup. Then the couple then don their symbolic crowns and embark on the 'Dance of Isaiah', a triple procession around a table adorned with the cup and candles.

The party that follows are over-the-top events with lots of plate smashing, possibly the Greek's most famous pastime, as well as a feast of dishes heavily reminiscent of Turkish cuisine. As is also the case in Turkey, participating in traditional dances is a major part of the night, starting with the 'money dance', where guests will pin cash on the bride and groom as they dance. The Greek variation to this tradition shared with Turkey, where the bride is also adorned with jewels, is for the groom to shred his tie and sell the pieces to participants in exchange for honeymoon spending money.

The Kalamatiano, or "handkerchief dance," oddly reminiscent of Turkey's traditional halay is a major component of the celebrations as is the Zeibekiko dance, which mirrors Turkey's Zeybek. Guests will also throw money at the musicians in another custom shared between these historical neighbors.

The wedding cake is a special combination of honey, sesame seeds and quince and like many places in the world, including Turkey, guests are also given parting gifts of Jordanian almonds. According to the Greeks, however, if you are single and place one of the said almonds under your pillow, you may indeed dream that night of whom you are destined to marry.
Last Update: Jul 16, 2015 10:46 pm
RELATED TOPICS