On the Bosphorus, under the stars: Jazz at sea 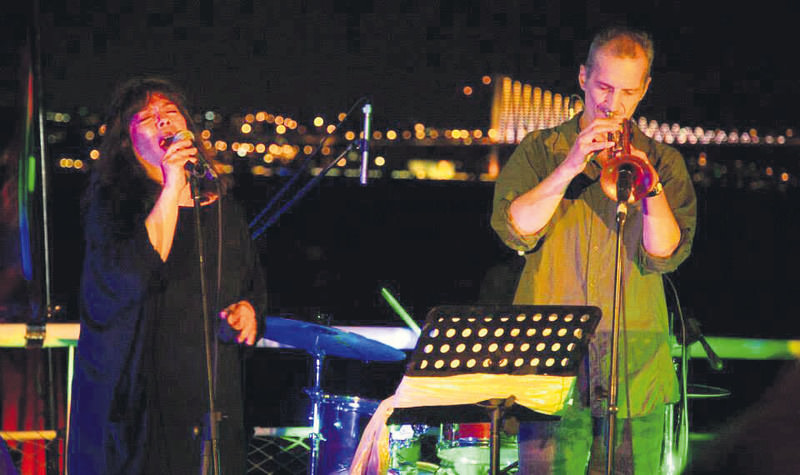 The Jazz at Sea series of concerts takes place aboard the Primetime Cruise ship, equipped with a stage, bars and seating areas.
by Leyla Yvonne Ergil Jul 21, 2015 12:00 am

Jazz at Sea, a unique musical venue aboard a boat cruising the Bosporus, resumes this weekend with a whole new series of performances by Turkey's leading jazz musicians for an experience and setting that is truly once-in-a-lifetime

Turkey's leading jazz performers, from İlhan Erşahin to Sibel Köse, will be gracing a very unique stage this summer aboard the Primetime, a three-level intimate cruise ship, that will set sail along the Bosporus, as Turkey's very own jazz legends perform. Talk about the ultimate way to enjoy an evening of live music in a stunning setting all while discovering Turkey's musical greats and vibrant jazz scene.

Jazz at Sea kicks off this Friday July 24, and has a lineup of five different top jazz acts to follow every two weeks all the way into September. This summer's program is as follows; this Friday, July 24, the Ece Göksu Quintet opens the series. On Saturday, Aug. 8, İlhan Erşahin comes to town with his Istanbul Sessions, a fortnight later on Saturday, Aug. 22, the Elif Çağlar Quartet performs and on Friday, Sept. 4, the Sibel Köse Quartet takes the stage. The concert series will come to a close with performances by the trio Ülkü Aybala Sunat, Nilüfer Verdi and Apostolos Sideris on Saturday, Sept. 19.

The Jazz at Sea series of concerts takes place aboard the impressive multi-level Primetime Cruise ship, equipped with a stage, bars and seating areas. Normally, the boat sets sail from the pier off Cemil Topuzlu Park, Kuruçeşme, with the exception of this Friday's boat trip, which coincides with this weekend's intercontinental Bosporus Swim, and therefore, boarding and arrival for this day only will take place from Bebek Pier.

Guests are welcomed on board from 19:00 onwards. The boat departs for the Bosporus at 21:00, with the live performance beginning soon after. The two-set show comes to a close at around 23:30 with JoyJazz radio filling in the void and returns back to shore at midnight. Tickets, which are a hefty TL 140 for this unique entertainment venue, can be purchased at Biletix, and a limited amount will be available for purchase on the night of the concert evening aboard the Primetime Cruise. The Primetime Snack Bar serves up select snacks and drinks at extra cost.

This Friday's series opener is the Ece Göksu Quintet in which jazz vocalist and pianist Ece Göksu will be joined by Bulut Gülen on trombone, Can Cankaya on piano, Kağan Yıldız on contra bass and Cem Aksel on drums. Having pursued classical piano training since she was 11 and studied at Hacettepe University State Conservatory as well as receiving classical piano training at Mimar Sinan University, she then veered into jazz vocals, which led her to pursue graduate studies in jazz performance in the United States on a Fulbright Scholarship. In 2012, she released her first album "Masal," with a majority of the music and lyrics attributed to her. On Friday, Göksu brings her vocals and piano playing aboard the Primetime to kick off one of the summer's most highly anticipated jazz-related events.

The second installment of the series takes place on Saturday, Aug. 8, with Turkey's own living jazz legend, Swedish-Turkish musician İlhan Erşahin's İstanbul Sessions outfit, in which he is joined onstage by three other highly esteemed musicians in their own right: bassist Alp Ersönmez, drummer Turgut Alp Bekoğlu and percussionist İzzet Kızıl. The founder of the Nublu sound and label as well as clubs in New York and Istanbul, İlhan Erşahin's Istanbul Sessions will also be releasing a new album in Turkey this October.

On Saturday, Aug. 23, another outstanding Turkish jazz vocalist performs, as the Elif Çağlar Quartet takes the stage. Çağlar, an alum of Bilgi University, where she studied jazz composition, went on to pursue graduate studies at the Aaron Copland School of Music in Queens College, New York. Her first album "M-U-S-I-C," released in 2010 was the first-ever album in English in which the lyrics, music and arrangements were conducted entirely by a female jazz vocalist. Her second album, another collection of English compilations "Misfit," in which she was joined by internationally acclaimed jazz musicians Aaron Parks, Harish Raghavan and Eric Harland, hit the shelves last May.

The Sibel Köse Quartet takes the stage on Friday, Sept. 4. Sibel Köse has been gracing the stage with her well-loved improvisational jazz vocal stylings for over two decades now and is easily the most well-known name in Turkey's jazz circles. She has released nearly 10 albums and is a regular on the jazz festival circuit and regularly hosts workshops and award programs for aspiring musicians. The Ülkü Aybala Sunat, Nilüfer Verdi and Apostolos Sideris trio Ülkü Aybala Sunat, Nilüfer Verdi and Apostolos Sideris close out the series on Saturday, Sept. 19. Sunat is perhaps best known for her repertoire of variations on Jeff Buckley songs. Verdi could easily be considered Turkey's first female jazz pianist. She has studied at both the New School in the U.S. as well as the Berklee School of Music and has released two albums thus far, entitled "Mana" and "İzhar." They are joined by charismatic Turkish bassist and composer Sideris for another night of unforgettable music.

Each performance scheduled is of high caliber, making this a top of the line musical jazz experience, while the fact that it all takes place aboard a cruise ship sailing the Bosporus, makes this a not-to-be-missed excursion.

On another note, Istanbul City Lines offers an evening Bosporus tour every Saturday until September, which takes off from the Bostancı jetty at 17:30 and makes stops in Kadıköy, Eminönü, Üsküdar, Beşiktaş. The ferry sails to Anadolu Kavağı, while musicians perform Turkish songs, where it stops for two hours. Although a completely different experience, this boat tour combines the Bosporus nightscape with music for yet another interesting and unique to Istanbul experience.
Last Update: Jul 21, 2015 11:27 pm
RELATED TOPICS