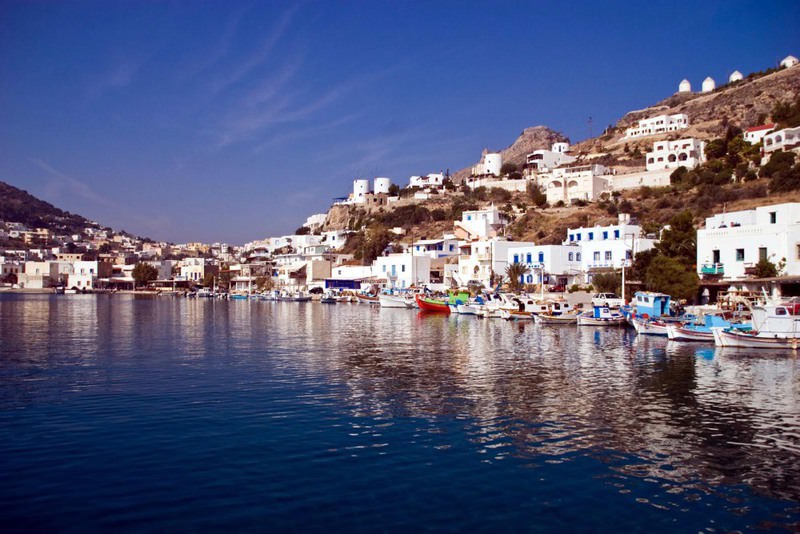 As of last Friday, there is a new boat from Bodrum to the Greek island of Leros. One of the most beloved of the Dodecanese, the route to Leros is just one of a number of boat services to neighboring Greek isles. If you have yet to take a daytrip or a longer excursion to one of the many islands serviced from southern Turkey, then this is an excellent experience to chalk down on your list of expat adventures

Turkey has a number of excellent gateway destinations that offer ferry services to neighboring Greek isles that make a quick and easy getaway to Greece both enjoyable and viable. From Ayvalık to Lesbos, Çeşme to Chios and Bodrum to Kos, boat services accommodate passengers and vehicles, while passenger-only boat services are offered to Rhodes from Marmaris and Fethiye, Kuşadası to Samos and Meis to Kaş.

Leros: The newest route from Bodrum's Turgutreis to Leros began services on July 24 aboard a 40-meter, 430-capacity passenger catamaran that takes just 50 minutes to travel to this authentic and lesser-touched island. Life seems slower on Leros, offering the ideal opportunity to truly experience Greek island life during your stay. With extensive coasts, ancient ruins and even a medieval castle, there are no words that can do justice to the vibe in Leros, so you will just have to see for yourself how the island can transport you to a different time. The new service to Leros departs at 10:15 a.m. and returns at 4:45 p.m. Mondays and Fridays. The one-hour trip used to take six hours and necessitated a connecting boat in Kos.

Kos: Bodrum serves as a gateway to a number of the Dodecanese, with regular services in the summer and winter to Kos on a mere 20 minute boat ride by a passenger catamaran or with a larger ferry that takes less than an hour. Turgutreis, a secondary customs point on the Bodrum peninsula, also offers daily 25-minute ferry services to Kos that depart in the morning and return at night. Kos, which is known for its abundant sandy beaches, is a great daytrip from Bodrum, where you can wander the town that is laden with Greek and Roman ruins, including the 15th century Castle of the Knights fortress, the third century Casa Romana Villa sporting impressive mosaics and the ancient agora ruins as well as the Kos Archaeological Museum. This quaint harbor city also serves as a gateway to a number of other popular Greek islands such as Santorini and Symi.

Kalymnos: From Turgutreis there is also a hydrofoil that sets sail every Saturday morning for a half-hour ride to Kalymnos that then returns at night, allowing the option to also visit this picturesque island located between Rhodes and Kos, which is the third-most populated of the Dodecanese following the aforementioned islands. Kalymnos, known as the "sponge-divers island," doubles as an excellent spot for rock climbing and bouldering and is less touristy than its neighbors while also being one of the wealthiest of all of the Greek islands.

Rhodes: Rhodes, the largest of the Dodecanese, is certainly the most popular and populated, and is serviced from three different points in Turkey: Bodrum, Fethiye and Marmaris. Rhodes has a bustling nightlife and many beach resorts, but also boasts ancient ruins from the crusades as well as the medieval Street of the Knights and the castle-like Palace of the Grand Masters. Bodrum operates a hydrofoil and catamaran service to Rhodes over the weekend, leaving in the morning and returning in the afternoon. The closest departure point from Turkey to Rhodes, however, is Marmaris, which operates a passenger catamaran every day in the summer that lasts just an hour and departs in the morning and returns at night. The next closest service spot to Rhodes is Fethiye, where a sea bus that takes an hour-and-a-half takes off every day.

Lesbos: From Ayvalık, there are boats that take passengers and cars to Mytilini, the capital of Lesbos, every day. The ride takes an hour-and-a-half and same-day returns are available on Wednesdays and Saturdays. However, this island is certainly deserving of a few days to explore. With dozens of quaint seaside villages, ancient ruins and a petrified forest, it is a popular weekend getaway for Turks who enjoy staying in the harbor city as well as venturing off to see the cultural draws in Molyvos – a village of stone houses surrounding the impressive Castle of Mithymna.

Chios: Situated just 7 kilometers away from the Anatolian mainland near Çeşme, Chios is the fifth-largest of the Greek islands and is nicknamed the "mastic island" for its prolific gum Arabic trees. If you venture out from the bustling town, then the Nea Moni, an 11th century monastery and now a UNESCO World Heritage Site as well as the medieval Genoese village of Mesta are the sites worth heading inland for. The Çeşme-Chios vehicle passenger ferry, which takes an hour-and-a-half, departs every morning and night and returns daily, making it very feasible to go for a day trip or an overnight stay.

Samos: South of Chios is Samos, which is accessed by a passenger ferry from Kuşadası that lasts 75 minutes and departs every morning and returns at night. This mountainous and semi-tropical island is the birthplace of mathematician Pythagoras and the astronomer Aristarchus, the first individual to suggest the earth revolves around the sun. Laden with ancient sites including the Pythagoreion, an ancient fortified port and the Heraion of Samos, a sanctuary to the goddess Hera – both of which are UNESCO World Heritage Sites – Samos is an excellent destination to combine museum and ruin visits with Greek island life at its finest.

Meis: Otherwise known as Kastellorizo, Meis is situated just 2 kilometers south of the Mediterranean coast of Antalya's Kaş, where boats set sail every day in the summer and on Mondays in the winter for the short 20-minute voyage. This fisherman's village is also laden with ancient ruins, Byzantine churches, Anatolian architecture as well as sea caves, namely the Blue Grotto, which, if you are the adventurous type, is definitely worth exploring. Boat tickets to Greece are generally priced in euros and start from around 20 euros one way for a shorter trip and up to 50 euros for longer routes. The cost for a same-day return ticket is generally only a little more, making the cost for a same-day return practically the same as a one-way ticket.

By taking a boat from one of Turkey's coastal destinations to the Greek islands, one could potentially easily sail their way to Italy. In addition, from Taşucu, a small coastal town in Mersin province, a passenger hydrofoil sails to Kyrenia, the tourist capital of Turkish Cyprus, in just two-and-a-half hours, while the vehicle passenger ferry takes a whopping seven hours. There is also a passenger vehicle ferry that sets sail from Taşucu to Tripoli, Lebanon that takes 12 hours for truly adventurous types.
Last Update: Jul 27, 2015 1:12 am
RELATED TOPICS