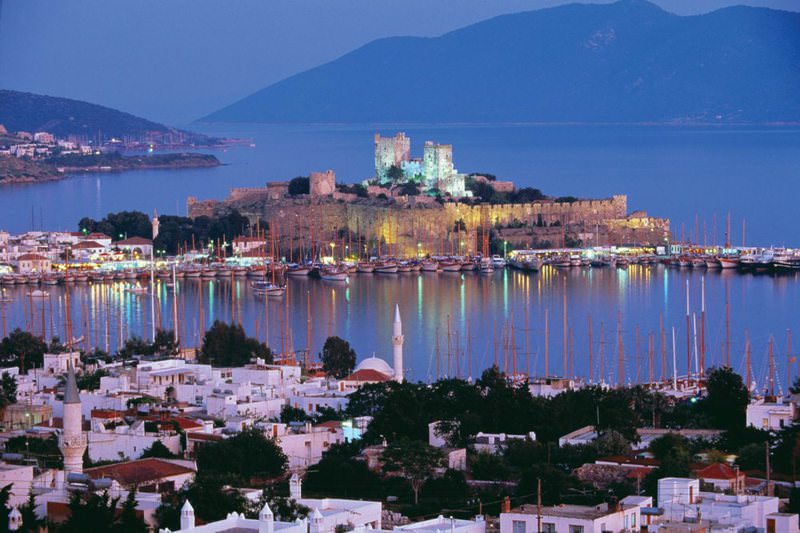 If Istanbul is equivalent to New York and Ankara to Washington, then Bodrum, one of Turkey's newer greater municipalities, is easily Turkey's answer to California. For me, going to Bodrum is like a trip back home where many of the comforts I miss are all available and all in the lap of luxury along Turkey's southwestern coast

My mother, a British-American and her husband, a fully-fledged yankee, have been living in Bodrum for the past 15 years. They closed up shop, literally, in Los Angeles, packed up and decided to realize a longstanding dream of my mother's to retire in Turkey. After spending a few years in a mega-residential site, the kind that cover the Bodrum peninsula, my mother and her husband had the fortunate opportunity to buy their own land and build their own house to their liking.

Needless to say, my mother's home now just perpetuates the notion this is Turkey's version of California, as it is an idyllic oasis sitting atop a hillside village overlooking the town of Yalıkavak, a district of Bodrum that has grown exponentially over the past decade. In fact, Bodrum itself is undergoing a vast expansion with new schools, hospitals, shopping centers, roads and even a planned tunnel in the works.

When I come to Bodrum, I do my seasonal shopping, with the endless options available in such a condensed space, it makes for the ideal opportunity to pick all of those goodies and treats to make the pantry complete for any resident expat. There is also a new IKEA showroom in town just to add to all of the extensive home and décor shopping available. The new malls are pleasantly landscaped and offer a respite from the hot weather and the gourmet charcuteries and specialty bakeries just make it all that much more rewarding.

But other than the shopping, I come to Bodrum for the people. My mother and her husband of course and their lively group of expat compatriots they spend the year with. Life for them seems to be a pleasant mixture of frolicking and organized events with the bustling expat community all amongst doing the everyday chores and duties of a retiree, whether it be watering the garden or planning the next garden barbeque.

Needless to say my mother's home to me is the ultimate luxury and feels like a return to home, in my case California, and I am always surprised at how much it feels like a different world from the hustle and bustle of Istanbul. The expat life here is a whole different story and one filled with day-time jaunts to farmers markets, organized expat exercise activities, nightly music and dinner events and weekly boat trips to say the very least.

My mother is one of the lucky few to have mastered the language having been married to my Turkish father in the States for a good decade. She and her American husband have both become Turkish citizens, so they're a bit ahead of the game than most, and it has made their lives that much easier. They also benefit from the state health system as they both have state insurance, which they use and go for regular check-ups at the state hospital. In the winters, they drive everywhere, but in the heat of the summer and with the influx of cars from Istanbul, they take minibuses that take off from the park by their house hourly, even though they live in a village in the hills overlooking Yalıkavak.

A normal week in the life of a foreigner in Bodrum can very easily revolve entirely around expat-related events. There is something to do every day of the week. To give an example, today was water aerobics day held in a residential site pool amongst the Yalıkavak expats. Tonight is Latin music night at Café Minor. The next day my mother's husband will get a tattoo in Bodrum as mum and I head to the local, but amazing, Yalıkavak market. The next day they are schedule for a full hospital day of appointments and tests. On the weekends, two "Bit Pazarı," in other words flea-markets, are set up in Bitez, Yalıkavak and Turgutreis, with many expats out there hosting stands and shopping all for the greater good of charity. My mother belongs to a group of rotating volunteers whom I might add are not exclusively expats, and who aim to collect funds for good causes such as neutering street animals, offering educational scholarships and for purchasing supplies and equipment for local schools.

Summer is of course the spice of life here in Bodrum, where there is a wealthy program of events that run over the next few months. We are just coming off the tail end of the Bodrum International Ballet Festival, only to commence with the "Stars in the Bodrum Antique Theater" series, which will run from August 8-29 with performances by Duman, Nilufer, Sezen Aksu and Teoman to name just a few. Concerts are held in the open-air Bodrum amphitheater, making it a truly magnificent experience to sit on the stones of history under the stars listening to Turkey's greats.

There are two other very unique musical festivals that run in August and are held in the quaint and charming seaside town of Gümüşlük. The 12th Gümüşlük International Classical Music Festival runs until Aug. 8, with musical performances such as the closing concert of a piano virtuoso performing renditions of Nirvana and Pink Floyd classics also held under the stars in an antique stone quarry. Another quite amazing festival is the Eklisia Chamber Music Festival, which will run until Aug. 13 and is held in an ancient Byzantine Church overlooking the sea.

Built amongst the ruins of the ancient site of Myndos, Gümüşlük happens to be my favorite part of the peninsula and would be the Venice Beach to Bodrum's LA. Türkbükü would be the equivalent of Beverly Hills, with Yalıkavak standing out on its own merit as Turkey's version of San Francisco and is one of the most expat-heavy and event-organizing populated areas of Bodrum. Yalıkavak also houses the ultra-luxurious Palmarina, a marina dock equipped with The Billionaire's Club and culinary delights Mezzaluna, Cipriani and Nobu as well as luxurious boutique shops and even a customized Magnum stand where you can create your own ice cream bar.

Turgutreis is the second largest town on the Bodrum peninsula and also has a highly populated and active expat social scene as well as its own marina, which will also be hosting a classical musical fest from Aug. 15-19, including two sunrise performances that will start at 7:00 a.m. However, these are just a few of the vast number of events and venues this newer southern metropolis has to offer.

Winter, it could be argued, is even more fun for expats living in Bodrum, as the temperatures drop and the traffic dies down and what was once a town-turned-city returns to its calmer state and feels even more like "home" for the foreigners living here. The winter season kicks off with the annual Ladies Luncheon, held each November for the resident female foreign community. Every year, the Bodrum Municipality hosts a gathering for the expat community to usher in the new year. The expat community hosts seasonal marts where expats can peddle their handmade crafts and delicacies. In winter, expat groups also organize to form bowling leagues, book clubs, play groups, cooking classes, history lectures and hikes. From October to May, the Herodotus Academy of the Third Age (H3A) organizes weekly hikes at varied levels and special talks for those interested in delving deeper into the history and flora and fauna of the region.

Bodrum has an extensive number of resources to learn about the area and find out about events. The Bodrum Echo is an excellent weekly newsletter that informs residents about events and activities and the Bodrum Bulletin website has a resourceful directory and classifieds section. There is also a Bodrum branch of InterNations, the world's largest network of expats living and working abroad. They hold monthly gatherings in interesting and fun locations and even have subcategories of groups based on different nationalities living in the region. There are a wide number of expat and event-related Facebook groups and Back to Bodrum is an excellent blog of a British expat recounting her return to the region decades later.

Turkey Street, the second novel released by Jack Scott, who pens his adventures as an expat in Bodrum, in both Perking the Pansies and this latest edition released May 18, gives a hilarious recount of the ups and downs and comings and goings of the expat scene in Bodrum, having collided with my mother's own antics and circle of friends…
RELATED TOPICS