Rocking out Turkish-style on the beach: Zeytinli Rock Festival 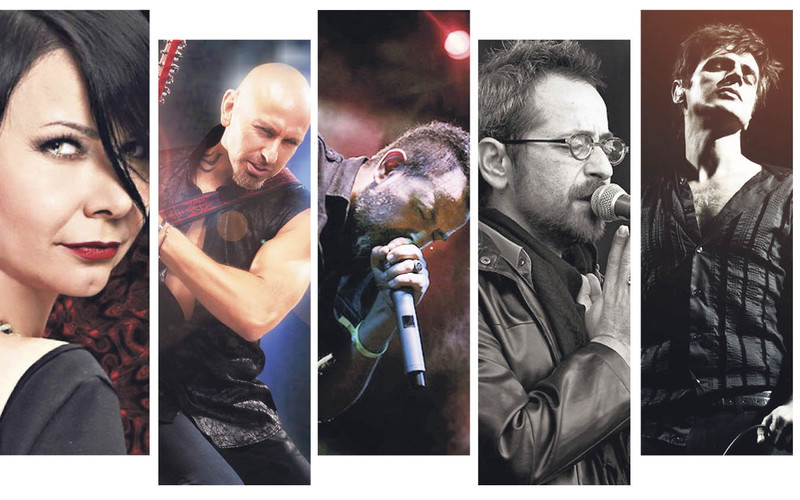 Get ready for four days of sun, sea, sand and rock performances by more than 60 bands at the Zeytinli Rock Festival, which will be held from Aug. 20 to Aug. 23 on a beach in the Gulf of Edremit on the northern Aegean coast

Zeytinli Rock Festival, easily the biggest gathering of Turkey's best rock, world and alternative music productions, will commence this coming Thursday to offer four days of rocking out, Turkish-style. It will include headbanging on the beach and camping on the sand and under the stars in a quiet town where Balıkesir province meets Çanakkale, set along the Gulf of Edremit and facing Lesbos all while on the skirts of the legendary Kaz Dağı mountains.

Starting this coming Thursday, Aug. 20, and running through Aug. 23, a small village on the Aegean coast called Zeytinli will be hosting the biggest domestic rock festival this country has to offer. Each night, 15 of Turkey's finest resident rockers, ballad evokers, alternative, reggae and world music enthusiasts will take the stage to mark a total of 60 bands performing over this four-day-long festival. Every night has some serious hard-hitting headliners, spanning from popular crooner Teoman, to easily the country's most popular rock band Duman and top heavy metal representatives Pentagram, who are the fest's closing regulars. Vocal vixen Şebnem Ferah and the eclectic metal vocalist Hayko Cepkin also headline. Anatolian rock classics such as Bulutsuzluk Özlemi, Kurtalan Ekspres and Niyazi Koyuncu will perform as well as progressive rock band Nemrud. Melis Danişmend will be gracing fans with her lyrical stylings and mesmerizing stage performance as will Luxus, a bumping Roma music outfit, and of course, one of my personal favorites, Turkey's resident reggae band Sattas. Meanwhile, in addition to the main stage, there will also be a Keşif Sahnesi, a reconnaissance stage as such, of amateur Turkish musical outfits that have won the chance to take the stage after a competition in four different regions throughout Turkey.

Although the Zeytinli Rock Festival is actually nearing a decade since its first rendition in this sleepy summer resort town on the shore of the northern Aegean as an effort to promote Turkey's rock legacy and progressive newcomers, this year's festival is set to be the longest and the largest. The organizer and resident rocker himself, the dynamic Umut Kuzey, tells me they are expecting 50,000-55,000 people to come out to this year's festival, while Serdar Meriç, the organizer of Rock Otobüsü, a special bus service that will run rockers from cities around Turkey to the festival grounds and back, tells me they expect 10,000 to camp out for the duration of the event.

For early-bird campers, the festival actually kicks off on Aug. 19, with an opening party and performance by Istanbul Arabesque Project, a Turkish rock-based arabesque band.

Both stages and the camping area will be spread out along 40,000 square meters of beach on the coastline of the Zeytinli Dalyan shore. Performances will kick off each day at 5:00 p.m. and run late into the night. So, campers can spend the day swimming or adventuring in the region only to resume rocking out at night.

Zeytinli is situated just 2 kilometers from the popular Turkish summer resort town of Akcay, which also has lots of accommodation options if camping is not your thing. Or you could stay at one of the treehouses, bungalows and "glamping" sites in the depths of Mt. Ida, equipped with forest creeks to swim in, such as Hizir Camp or Akaleos Camp.

The Kazdağı National Park is also nearby, and a tour could easily be worked into the early hours. Another excellent excursion while in the neighborhood is to visit the nearby village of Tahtakuşlar, which boasts the Ethnography Museum, which has beautiful artifacts on display detailing the nomadic lifestyle of the Kaz Dağı villagers and the legends and history that surrounds them.

To get to the Zeytinli Rock Festival is easy. There are regular flights from major cities to the nearby Balıkesir Edremit Koca Seyit Airport and regular bus services to Edremit and the bigger yet further away city of Çanakkale.

As mentioned, Rock Otobüsü is a new transportation service that was established to transport like-minded rock music lovers in the masses to the Zeytinli Rock Festival from cities throughout Turkey and provide transportation for the trip back. "The purpose is to pick up people heading to the festival from their respective cities with intercity buses and then return them back home once the festival is over," Meriç said, assuring me that yes, as all aboard will be of like-minded musical persuasion, there will be rock music playing on the bus.

BlaBlaCar is a ride-sharing portal that is actively connecting festival-going vehicle-owners with passengers for those who want to ride in a private car and share the costs.

Tickets for this show are a steal at TL 40 ($14.35) for a day pass, 85 TL to see all of the shows and 100 TL for combined entry to all of the shows and the campsite for the duration of the festival. The low cost of tickets are all part of this valiant effort to keep rock alive and kicking while allowing new groups in Turkey to come to the forefront and thrive. Tickets are available from Biletix as well as at a number of local vendors throughout Turkey. Check out www.zeytinlirockfestivali.com for more info.
RELATED TOPICS