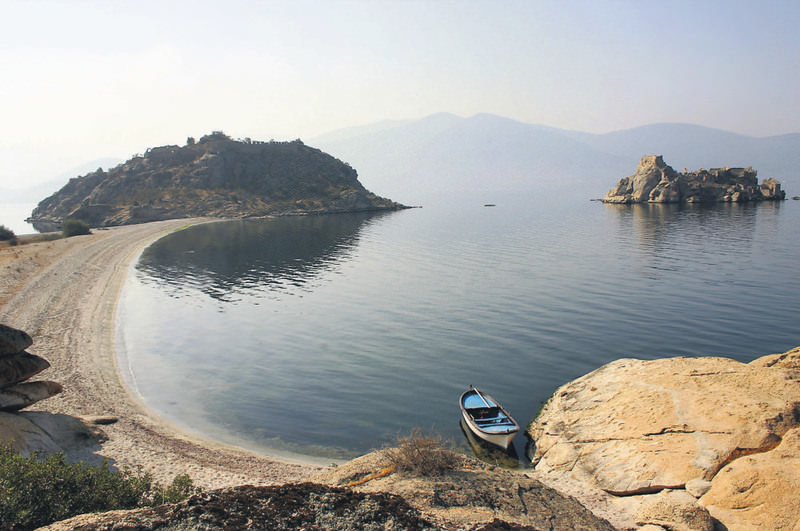 Lake Bafa is the perfect mixture of mystical beauty, nature and history, making it a welcome oasis for any weary traveler and a paradise for active travelers seeking to veer off the beaten path

Bafa Lake is a very special oasis of nature, history, sports and stunning vistas set off the beaten track between the popular summertime destinations of Bodrum and İzmir. Being in Bafa is like being in another world and I recommend anyone who has an adventurous soul to venture off into this land of ancient cities and their ruins, shape-shifting granite and gneiss boulders, stoic birds along the shore, 1,000-year-old olive trees, 8,000-year-old cave paintings and orchids growing in pine forests.

Now, Bafa Lake has become a bird sanctuary and an open-air museum of sorts, where the flora and fauna are nearly as impressive as the region's 8,000-year-old history as evidenced by the wide presence of ancient cave drawings, temples, churches, monasteries and tombs that are sprinkled throughout the lake region. Small islets inside the lake serve as bird breeding grounds coupled with ancient remnants of stone walls and archways of ancient structures visible from the shore.

Encircled by the Beşparmak Mountains, aptly named after the "five-fingers" the range resembles, but known as Mt. Latmos in mythological legends, Lake Bafa is a 60 kilometers squared landlocked lake that was once the Aegean's inland reach. The lake is now 50 percent salt water, providing for both salt and fresh water fishing, which along with agriculture, consists of the region's prime sustenance. There are a sprinkling of villages that surround the lake, with Kapıkırı, which also houses the ancient sites of Herakleia and Latmos being the most conducive for travelling visitors. According to legend, it was a shepherd from this village that the Goddess Selene fell in love with and begged Zeus to put in a perpetual sleep as she continued to bear up to 50 children from him.

The vista surrounding the lake is stunning and both inspiring and ominous at the same time, but regardless, it offers views unlike anything I have ever seen during my three decades of visiting this country. For years, I have driven past Bafa on my way and back to Bodrum, but this time I decided to make a quick stop. I chose the easiest option by way of pulling into Hotel Silva Oliva, having seen the signs for its restaurant Natura off the Milas-Aydın highway between Izmir and Bodrum. My plan was to simply check out the restaurant and to see if there was access to the lake.

However, as I made my way down through the 50,000 square meter grounds of Silva Oliva, I quickly realized I was somewhere very special. On my way down to the shore through the centuries-old olive trees and pine, I saw flamingos, pelicans and great cormorant as well as many other birds, giant turquoise lizards and orchids growing naturally in the forest. The beautifully paved stone steps lead down to yoga platforms, tavern-like areas chill-out spots and view-seeing platforms and eventually a pier to the lake and its impressive shore. What appeared like black sand, were actually tiny seashells. When I saw the warm still waters of the lake and the welcoming kayak (or "kano" as it is referred to here) on the shore I decided to venture out for a sunset rowing session and to stay the night.

Needless to say the kayaking was amazing, I circled a small island with birds and monastery arches. A flock of dozens of dark Great Cormoran flew lowly over me as I laid back in awe just watching. Nearby fisherman gave me waves and my return was perfectly timed to the sunset. The 30 or so rooms at Silva Oliva all have stunning views of the lake and surrounding nature and each are equipped with terraces from which to enjoy it from. Everything in the restaurant is fresh and locally sourced and the owner Florian, a fellow expat whose German-Turkish parents bought the land 30 years ago and whom he himself made the permanent move to Bafa five years ago, makes his own delicious natural ice cream with creative flavors such as olive oil, mandarin and my favorite coffee, salt and caramel. Florian also prepares smoked eel, which he sells along with preserves of fig and strawberry as well as honey and cold-pressed olive oil, he has pressed at the region's last remaining operating historical stone-press. The rye bread is also milled and baked on the premises.

In my humble opinion, this particular hotel offers a unique intimate experience with the lake and its flora and fauna due to its vast forest-like setting and the sensitive approach the land's caretakers have taken in preserving its natural beauty. It is also the best area to swim from in the lake from as the concentration of algae is less intense on this particular bank of the shore. Although, admittedly I was alone in my venture when I did it, the dip was warm yet refreshing, and the water clear to its sandy bottom, however there is of course a certain amount of seaweed. Although the rooms are simple, they are certainly the most spacious and have the best views in town, the cost to stay is also nearly half that of the accommodation options in Kapıkırı, the region's touristic village.

Kapıkırı is also a village established below the ruins of Latmos and amongst the remnants of the ancient town of Herakleia, founded in BC 350 at the command of King Mausolos of Caria. There are also easily accessible rock drawings that date back to the fifth and sixth millennium BC. To be closer to the action, as it were, and to get a feel for the village life and socialize with other visiting travelers then, Kapıkırı, located 10 kilometers from Bafa, has a sprinkling of hotels and restaurants that offer quaint and pleasant accommodation. Agora Panisyon is the oldest and most established venue in Kapıkırı and has quaint bungalows as well as a tavern-like restaurant and garden courtyard. I happened to be there on the day of the wedding of the eldest son of the family that owns the place. I sat with a few women who had flown out independently from Holland and Germany just to take part in this local Bafa villager's wedding. The sounds of the davul and zurna, the tradition drum and shrill pipe, echoed throughout the vista, resonating back through the mega granite stones that dot the landscape.

I wandered through the village where the local ladies peddle their hand-knit lace and made my way down through ruins and 8,000-year-old cave drawings to the shore, which also faced yet another islet of exotic birds and ancient ruins. There, I visited Selene's Pansiyon, the other stand-out option for accommodation in Kapıkırı, equipped with newly revamped rooms and even a small pool and located at a closer proximity to the shore.

All of the hotels mentioned help to arrange hiking, sightseeing, bird watching and flora and fauna walks and will even arrange boat and donkey tours of the sites. However, in the sports world, Bafa is best known for its bouldering potential with spectacular huge granite boulders.

Zorbey Aktuyun, a record-breaking national mountain climber, has published Turkey's first-ever bouldering guide, titled Bafa Gölü Bouldering, the fruits of a decade of labor in which he presents 270 boulders and 550 boulder problems for fellow climbers. The Petzl Team also came out to climb in Bafa last year.

Bafa is not the typical sea, sun and sand vacation spot; however it is an entirely different yet exhilarating way to experience Turkey's lake life, which just happens to be embedded in the remnants of ancient civilizations. It is a special spot for those who want to venture off the beaten path and be active while discovering what to me is now one of my favorite spots in Turkey and certainly rivals the typical tourist destinations for most beautiful.

On a side note, after spending three days voluntarily checking out Bafa, my car broke down just as I was entering the highway to head home. My car spent the night at the local car repair shop and I returned back to Silva Oliva. I have to admit, I wasn't upset for a moment and only relished the opportunity to spend more time there.

Bafa, and especially the tranquil Hotel Silva Oliva will become my new pit stop whenever I drive by. It is also frequented by many who take on the Carian Trail. After Bodrum, it was like being on a deserted island… but one that serves organic food, has hammocks and kayaks lying around and rooms with air conditioning and terraces overlooking the vista. The open sky really is the limit to the type of activities one can embark on during a stay in Bafa and I highly and wholeheartedly recommend visiting.
RELATED TOPICS