Refugees seek a gateway to hope from Turkey's coast 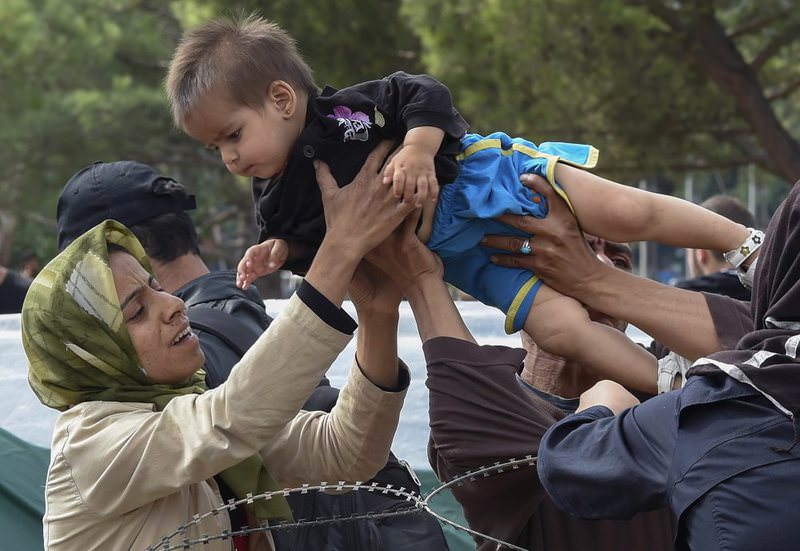 As the current refugee crisis on the Greek islands off Turkey continues to escalate, expats on this side of the Aegean as well as in its European neighbors rally together to do all they can to help

While the Syria crisis and its effects on Turkey – one of the nation's most affected by the influx of refugees – continues, there is another escalating humanitarian drama developing along Turkey's Aegean coast. This crisis is even starker in the Greek islands that face the Turkish coast, as the number of refugees that attempt to make the perilous journey across the Aegean on overloaded lightweight rubber boats continues to grow. Stories have abounded throughout the summer about Syrians camping out on beaches or in the parks of popular tourist destinations in Turkey, however, the situation on the Greek islands is much worse. With the economy already on the brink and tourism dropping, the daily influx of thousands of refugees from Syria as well as countries such as Iraq and Afghanistan has made the situation trying – especially so on the islands of Kos and Lesbos.

The trip itself is treacherous, as a hefty price is paid for a seat aboard a crowded boat, many of which are unable to complete the journey and end in an unfathomable fate as the sad news story headlines that abounded this summer have shown. The route from Bodrum to Kos, at just over 4 kilometers, is one of the most sought after; as a result, refugees are seen holed up in a park near the Bodrum marina and now supposedly in the town marketplace. The expat community has mobilized to prepare care packages, supply necessities and established a wide network to drop off donated items. In the more rural Ayvacık, which is another gateway to Greece, refugees hide out on secluded beaches where locals have brought them water and other supplies. Their only evidence is the clothes and personal items they leave behind them on the shore. Because once they make it to Greece – if they do so successfully – they are met with an even more trying destiny as they try to navigate their way to get to a city where they can acquire the necessary travel documents to move on to other more promising regions of Europe.

News stories have also surfaced of a British expat couple – Eric Kempson, a sculptor, and his wife Philippa – who live on the opposite shore from Assos on Lesbos' Molyvos coast. Island residents for more than 15 years, they live with their musician daughter and own a store called Elleni's Workshop where Eric's olive wood sculptures are on display and for sale. The news stories have been covering a whole different line of work of sorts they have now embarked on by means of voluntarily greeting the rubber rafts coming in from Turkey with water, towels and dry clothes. For them, the refugee situation on their adopted home of Lesbos has become an integral part of their daily life. I had the opportunity to speak with Philippa as fellow expats with a sea between us but an ocean of problems.

Refugees are arriving on boats in the thousands every day, she told me, saying on most days, 2,000-3,000 arrive. "We try to greet as many as we can," Philippa said, adding: "It is now our daily life; there is no room for anything else. We have a shop but we are completely consumed at the moment by the situation."

I asked Philippa if tourism was affected on the island this summer, to which she said that both the refugee situation and the country's economic situation has been somewhat detrimental to tourism this year. But she also explained that they are experiencing a whole new type of tourism in the form of foreigners that have come to vacation on the island are instead helping out with the situation, returning home to send care packages or also in many cases, booking return trips to come and help out again.Philippa shared with me that, just the day before, a couple of German tourists organized three buses to take refugees to Mytilini. The biggest problem faced on the island at present is the lack of transportation for refugees to reach the main city, which is a hefty 65 kilometers away from where they land on shore. "Many are now forced to take that long walk in the dark and in the heat, and many are pregnant women with young babies."

"In Mytilini, the situation is even worse," she told me, adding this is the first time she has ever heard tales of people trying to climb their way into detention camps. "The city is literally full." However, she said people are rallying together and setting up soup kitchens and there is also the Village of Altogether, a makeshift refugee center established by local activists that focuses on sheltering the injured. "In Molyvos, expats are doing all they can," Philippa explained, "but it has been seven months that they have been greeting boats and we're exhausted, especially now with the increase in arrivals." The visitors that turn into volunteers have been amazing she said, adding that volunteers come out weekly from countries such as Denmark and the Netherlands to help in any way they can with the ongoing crisis. Moreover, she said she has received numerous care packages and e-mails imploring how people can help since their story has been covered.

I asked Philippa what the situation was like now to which she said today, she counted 19 boats that came in. A crowd the size equivalent to a car park is now spread out among touristic spots, and she said she heard that one group spent 18 days waiting in the forest, or "jungle" as the refugees explained, until they were finally able to set sail from Turkey. "One group had a 3-day-old baby," she said.

What has also been disturbing for Philippa, in addition to the complete lack of organization and insufficient transportation, is the alienation her family and other expats have experienced by locals for trying to assist refugees. Her mother, she said, was even spat on for transporting a Syrian lawyer, his pregnant wife and two children in her car. I asked her if this situation has ever made her reconsider her adopted homeland to which she jokingly said, "Sometimes – maybe one day we'll move to Assos.""Nobody wants to stay, though, they are all on a mission to get somewhere else," Philippa stressed, adding that if there was adequate transportation on the island and beyond, most would head to Thessaloniki and then on to Macedonia. However, they are being held up there as well, she said, adding in her frustration: "What kind of Europe is this?"

As I write this now, a new slay of news reports show that the borders have reopened, which, hopefully, is a sign of hope for those unfortunately displaced whose only fault is being from a war-torn country and sole aim in this migration crisis is to move on to other horizons in Europe where they can begin life anew.
RELATED TOPICS