The best live jazz venues in Istanbul this fall 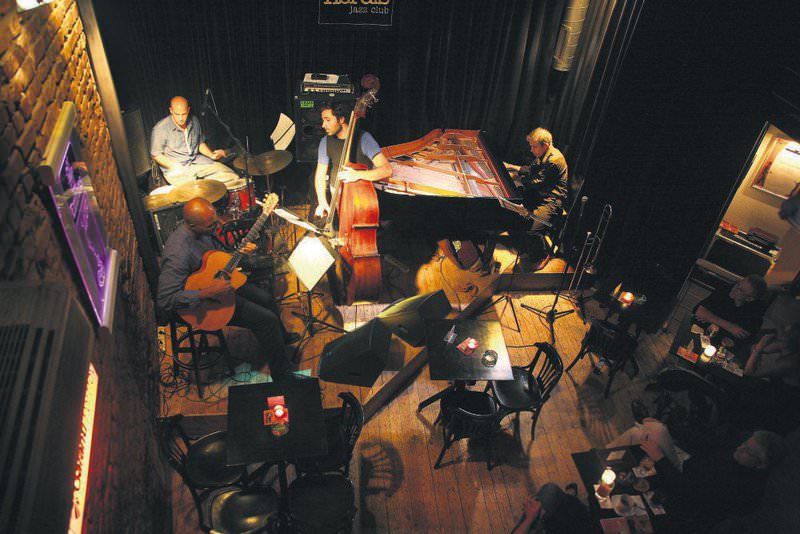 Listening to live jazz and its beauty melded with melancholy is the perfect way to ease this seasonal transition. Luckily, Istanbul has a number of impressive and unique jazz venues to get your fix this fall

The summer begins to wind down, the days become shorter and trees turn shades of yellow, meaning fall will be upon us soon. What better way to escape the blues than to go out and hear the emotions played live? Here are some of Istanbul's top venues to enjoy jazz music in the mega city.

An institution in Turkey, this jazz hub is the only one of its kind in the sense that the venue has completely captured the energy and essence of an underground New York jazz club. Situated near Galata Tower, it is as if the whimsical energy emanates from the windy streets of the district alone. This jazz clubs stands on its own as being the ultimate spot to listen to jazz in Istanbul. With crowded wooden tables set below the stage, this 120-person capacity space offers an intimate way to listen to top-notch jazz acts. There is also a mezzanine level with high bar stools and tables from which to watch the stage, which continuously hosts Turkey's jazz greats. Nardis also has an extensive menu of pastas, burgers, steaks, sundaes and even a chocolate fondue to make it the perfect splurge night out!

Not to be confused with Nardis is Noasis Jazz Club, Kadıköy's first jazz joint that opened this past spring. Live performances are held four nights a week from Wednesday through Saturday when the club stays open until 4:00 a.m. Starting in October, however, the club will add an extra night to their roster in the form of a jam session where musicians will be welcome to use their instruments and join the band onstage. There is also an enclosed patio and a newly launched vegetarian kitchen.

Located just at the entrance of Cihangir from Beyoğlu, Cafe Mitanni has it all. With daily live jazz music performances and a full menu of pastas, salads, sandwiches and even milkshakes, Mitanni is the perfect stop any time of the day, but this cozy creative space spills onto the streets at night, making it the perfect spot to listen to great music, eat great food and do some excellent people watching.Çukurluçeşme Sk., No: 6/A, Beyoğlu | (0212) 244 2472

Just around the corner from Nardis is Atölye Kuledibi, a more bohemian option to listen to live jazz music under Galata Tower. Once a mosaic workshop, this quaint and colorful space offers an intimate yet laid back experience with its performances and regular artsy clientele.

Housed in the Elite World Istanbul Hotel in Taksim, Jazz Company presents class acts on Friday and Saturday nights from 10:00 p.m. to 1:00 a.m. Currently the most upscale venue to listen to live jazz, you will have to hold out just a few weeks to do so as their live music season kicks off in October.

The brainchild of Turkey's own international jazz legend in the making, Turkish-Swedish saxophonist İlhan Erşahin, whose club in New York has pretty much created a new genre of jazz. Bringing international acts to the stage that walk the line between jazz and well, everything, Nublu in its new location on Sıraserviler Street is set to be this winter's wonderland; however, their concert program will also not begin until next month.

This mega artistic entertainment complex spearheaded by Tamirane hosts the Morning Jazz Sessions series every Sunday at 3:00 p.m. This Sunday's session will feature saxophonist Yahya Dai and his quartet, while the Asena Akan Trio play Sept. 27. In addition to this being an amazing facility with varied restaurants, performance spaces and activities, Başka Sinema will be bringing festival films to the Uniq Open-air Cinema on Tuesdays and Sundays throughout the month. This Thursday, the film "Rio, I Love You" will be screened, while the film "Best in Bed," will be screened on Saturday, "Citizenfour" will be screened on Sunday and "Pride" will be screened on Sept. 22. If you have not been yet, this new wave entertainment center is definitely worth a visit!

Once a tiny music space at, you guessed it, just 60 meters square, this performance space with an emphasis on jazz has now moved to their new 160 square meter home near Taksim Square. This month, 60 m² is hosting a concert series on one of the biggest tour boats on the Bosporus, the Tosun Paşa, with a slight deviation from jazz with performances by Circassian singer Gültan Altan on Wednesday, the ethnic rock group Marsis on Sept. 23 and jazz vocalist Jehan Barbur on Oct. 1. The boat leaves from Kabataş at 8:30 p.m. and Beylerbeyi at 9:00 pm. then returns to Beylerbeyi at 11:30 p.m. and Kabataş at 11:45 p.m.

Şehit Muhtar Cad., No: 2/2, Talimhane, Taksim | (0212) 249 3675Jazz at SeaThe Jazz at the Sea series on the Primetime cruise ship closes out the season on Saturday with the Ülkü Aybala Sunat, Nilüfer Verdi and Apostolos Sideris trio. The boat leaves from Cemil Topuzlu Park in Kuruçeşme at 9:00 p.m. and returns at midnight.

While the season is now just getting into sway, next month's Akbank Jazz Festival, which will be held from Oct. 21 to Nov. 1, will be the pinnacle of jazz in the city, with a wide number of international acts coming to perform at various venues in the city as well as on campuses throughout Turkey. One of the longest-running festivals in Turkey, this year marks its 25th year. Some of the stand-out shows on the roster are guitar legends Bill Frisell on Oct. 23 at the Zorlu Performing Arts Center and John Scofield & Joe Lovano, who will perform at the Cemal Reşit Rey (CRR) Concert Hall on Oct. 25. During the festival, there will also be a series of instrument and vocal workshops as well as a jazz workshop for children and a jazz on campus series, which will bring live performances to college campuses in İzmir, Çanakkale, Edirne, Eskisehir and Gaziantep, just to name a few.The fourth International Clarinet Festival is also underway until Sept. 20 with performances being held at various spots throughout the city, including ferry ports. At night, however, there are a series of concerts being held at the CRR Concert Hall, including a special tribute to Anatolian rock legend Barış Manço that will be held on Thurs and performances by the New York Gypsy All Stars and the Barcelona Gipsy Klezmer Orchestra over the weekend.

There are a number of larger venues that host more well-known international acts year-round such as IKSV Salon, Borusan Music House and Babylon. Just check out their programs for upcoming shows. On a side note, Babylon Bomonti opens its doors this week to a series of housewarming performances. This newest and largest of their spaces is located in the historical beer factory from where this Şişli neighborhood derives its name.

The Pannonica Jazz Bistro Lounge is Bodrum's resident jazz installment. Centrally located near the marina, some of Turkey' greatest musicians and vocalists, such as Bilal Karaman and Sibel Köse, will take the stage this month from Wednesdays to Saturdays, with shows starting after 10:00 p.m. Additionally, the Pannonica Jazz Sunset at the Marmara brings musicians to the poolside of the chic Marmara Hotel with stunning views of Bodrum as the backdrop. Performances are held between 7:30 p.m. and 9:00 p.m.