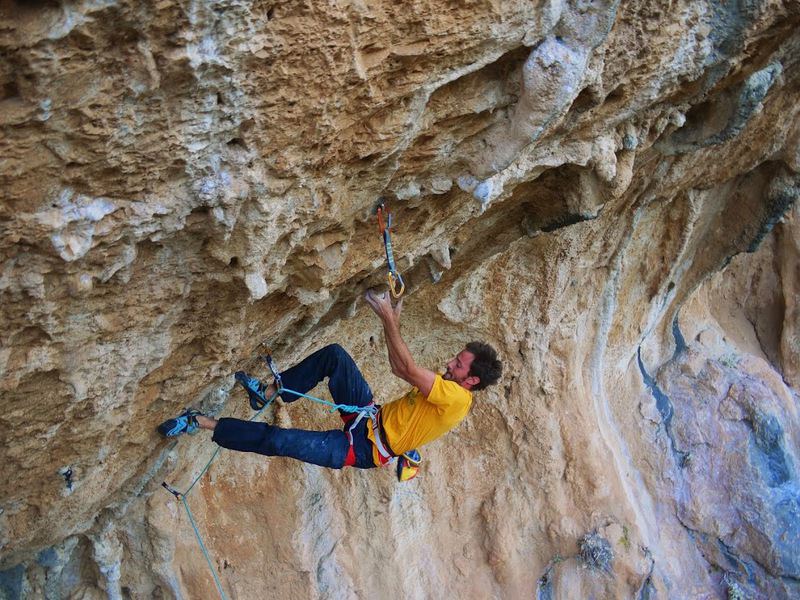 Meet Zorbey, a Turkish rock climber who has climbed all over the world and is now route-setting and compiling his expertise on some of Turkey's best bouldering and rock climbing destinations. Soon to release his second book on Manisa's Sarıkaya region, Zorbey is also the author of Turkey's first-ever bouldering guide on southwestern Turkey's Bafa Lake

Zorbey Aktuyun was born in İzmir in 1985 and began mountaineering and rock climbing at the age of 15. He graduated from Ege University's Department of Physical Education; however, he spends his time as a full-time rock climber. In this role, he sets routes and charts them, and compiles his findings and expertise into rock climbing guidebooks focusing on some of Turkey's best boulders and peaks. His first book, "Bafa Lake Bouldering," was also Turkey's first-ever bouldering guide that was released two years ago. Next month, Zorbey's second guide on climbing in Turkey will be released, this time focusing on routes and climbs in Manisa's Sarıkaya region.

I had the opportunity to catch up with Zorbey, a real-life rock climbing rock star who spends his life climbing rocks and sleeping under the stars as he discovers and conquers new climbs to share with other rock-climbing lovers. I asked Zorbey how he first got into rock climbing in Turkey, to which he replied that it all started when he met his climbing partner and "abi" (older brother) – as he refers to his dear friend in full respect, Muammer Yalçın – at the age of 15, which he said was the cornerstone of his life now. "To be honest, I never got into rock climbing for money or success. Instead, for me, I was motivated by being around nature, traveling, having fun and discovering new places, and these are still my greatest motivations," he said.

From 2007 to 2012, Zorbey participated in a number of international and European championships with the national team, but now he is pursuing a life more in nature and more geared toward preparing guides on the amazing rock climbing opportunities this country has to offer. "Turkey is a great paradise that is waiting to be discovered," Zorbey said.

I asked Zorbey where he has climbed both abroad and in Turkey, to which he shared that perhaps the most beautiful and interesting places internationally would be China, Argentina, India, South Africa, Spain, Switzerland and France. "In Turkey, each place is more beautiful than the next," Zorbey explained, citing destinations such as Erzurum, Datça, Dalyan, Gebze, Antalya, Olympos, Manisa, İzmir, Bafa Lake, Uludağ, Alanya, Adana, Eskişehir, Niğde and Bilecik.

I asked Zorbey what kind of climbing he is drawn to, in which he responded: "I engage in all branches of climbing, all around," including but certainly not limited to sports climbing, bouldering, traditional climbing, long wall and route setting. I asked if there was a style that was more prevalent in Turkey overall to which Zorbey quickly said: "Sports climbing."

Zorbey is a difficult one to pin down because he also spends nearly half of his time, or if broken down into days, at least half a year living outside in nature and climbing. I asked Zorbey where some of the best climbing destinations in Turkey are to which he answered: "Antalya (Geyikbayırı and Olympos), Bafa Lake, İzmir (Kaynaklar), Manisa (Sarıkaya), Datça, Isparta, Alanya, Erzurum, Adana (Çakıt and Anavarza), Gebze (Ballıkayalar) and Eskişehir (Karakayalar)." I also asked Zorbey if he could tell me what some of the special characteristics are that Turkey has that makes the country stand out for rock climbing. "The climate is extremely mild, there are high-quality rocks, and it is situated close to a lot of places in the world making it easy to come to Turkey from Europe or Asia. Our food and people are great and our nature is extremely special, so long as we can preserve it. Sea, sand, sun and climbing, all are great here," he said.

I also asked Zorbey if there were any rock climbing-centered events held in Turkey. He said there are a number of festivals that are aspiring to be held each year. He also stressed, "There could be even more but these are organizations that require a lot of work and need to receive support. Some of the festivals that take place in Turkey are the Kaynaklar Kaya Tırmanış, which has been held for the past 13 years in the spring in Buca, İzmir. Also in the spring, Çukurova University in Adana holds climbing events as part of their spring festivities. In the winter months in Uludağ, there is also the Mixed Climbing Festival and in Erzurum, the Ice Climbing Festival."

But Bafa, and now Manisa, are particularly special for Zorbey, as he has spent months, actually more like years, discovering, tracking, route setting and recording his rock climbing expertise and adventures into climbing guides on these very special destinations in Turkey.

"Bafa Lake Bouldering," released in 2013, was actually Turkey's first-ever bouldering guide. Zorbey told me that Bafa Lake, situated in the southwestern province of Muğla, just happens to be one of the world's biggest bouldering regions. "I have been climbing there since 2003, discovering and mapping it," he said. "At the end of 10 years, in 2013, I pretty much compiled all of the information I had gathered into a guide book. It was about time I did it too, because the region was starting to become internationally recognized [for its bouldering potential]. So, many years later [from my first time visiting], I ended up finishing the book and publishing it. It is now on sale in Turkey in English and in a number of countries around the world. From a rock climber's perspective, the area has endless potential, but additionally, its spirit, the history it encompasses and the views make it a truly unique location."

This rock climber extraordinaire is actually set to release his second rock-climbing guide on Turkey next month. Four years in the making, Zorbey's second book will be on Manisa's Sarıkaya region. "The area's greatest characteristic is that Mansa is close to İzmir, and due to its elevation in the summer months, it has a cool climate. It is also extremely practical to access and is the perfect rock climbing area for the summer. This newest rock-climbing guide penned by Zorbey will also include rock climbing routes, information on transportation and logistics, as well as city guides on Manisa and İzmir and a lot of valuable information. So be sure to check out Zorbey Aktuyun's newest guide on climbing in Turkey, which will be out in bookstores next month!
RELATED TOPICS