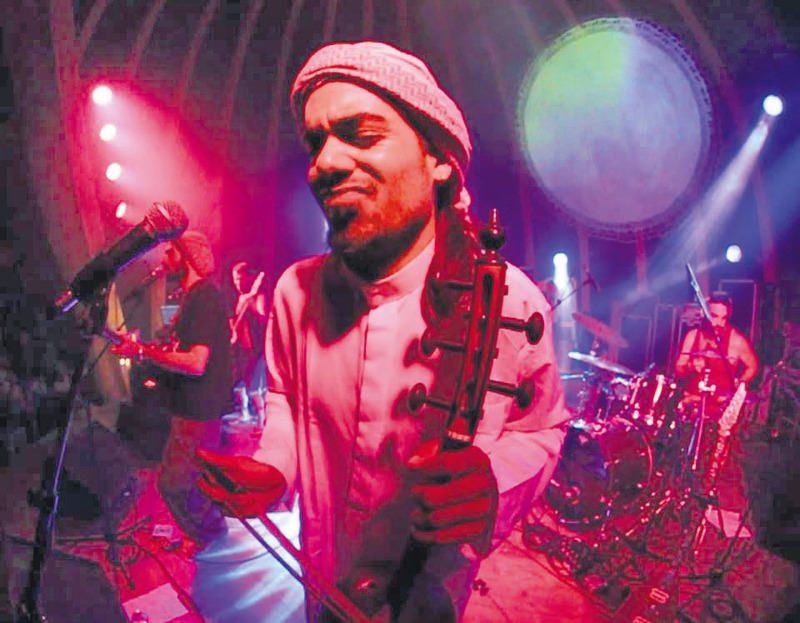 Recording with local musicians while traveling the world and beautifully combining Middle eastern and Western rhythms, Anna RF will perform in the country that played an influential role in their music this Thursday in Ankara and Friday in Istanbul

Anna RF is an exciting group of musicians producing infectious music that exudes joy and peace and is diffusing borders through blending melodies and instruments form the East and the West in their own unique genre. Self-described as electro-ethnic-reggae, Anna RF is so much more than a group as they travel the world and record with local musicians, infusing all of the different cultures they have touched with their own tones. Turkey has also played an influential role in their music, not only through the instruments they play but also with a number of songs inspired by their connection to the country. Currently on their Turkey tour, you can catch them on stage this Thursday in Ankara and Friday in Istanbul.

Anna RF, named after an Arabic-Hebrew phrase, which has a double meaning "I know and I don't know," consists of Ofir J. Rock, on vocals as well as guitar, didgeridoo and flute. Roy Smila, who plays a number of Turkish and Persian instruments including Kemenche, Oud and Cumbuş and Or Raveh plays bass and live electronics. When I first heard their song "I'm on my way to you" I was hooked. It was as if the melody echoed my own internal rhythm through its drawing on familiar yet unique sounds that so beautifully tie together the East and the West. When I saw their video and how these musicians exude happiness and positivity, I was immediately drawn into this world that seemed to have no borders. Their music makes you feel free, alive and more aware of the beauty in the world through the beautiful blending of its cultures.

To discover their cover of Aşık Veysel's "Uzun İnce Bir Yoldayım" was like uncovering a treasure chest with the excitement of hearing my new musical addiction play one of my favorite adopted homeland's songs. Then to find out they were touring in Turkey made it all seem serendipitous. I had the chance to catch up with the band and share my effervescent excitement of having discovered them and subsequently having become addicted to their new sound. Asking where they hail from originally, Ofir J. Rock, the formerly dreadlocked vocalist, who radiates joy and positive energy, tells me "We are from the south part of Israel. From a tiny village in the desert named Shaharut. There we have a studio and a house and that is where we started this project. Most of the year, however, we spend traveling around the world making music and videos," he adds.

A lot of Anna RFs music includes collaborations with local artists in authentic settings using a portable studio. Turkey is no different and in addition to having a number of songs influenced by Turkey, the band has recently just finished shooting three music videos here as well as played in Fethiye, İzmir and Konya before heading to the two major metropolises Ankara and Istanbul this week.

I asked J.Rock to tell me a little bit about what draws them to Turkey and about their special connection, to which he said, "First of all we love Turkey… the music, the food, the culture and the warm people. We find that here there is a very special feeling of welcoming and hospitality. The openness of the people here is inspiring to us. We are in love with the richness of the music. Everywhere you go in Turkey, you can find a beautiful and unique experience of music and culture." J. Rock also pointed out that Roy, another of the band's three founding members, actually plays the electric saz, which he says, "is a Turkish instrument of course. But most of all, Roy is engaged to a Turkish girl, our manager in Turkey."

I asked them to tell me a little bit about their song "Day and Night" a rendition of the Aşık Veysel classic "Uzun İnce Yoldayım." "We listened to this song for more than year and a lot of friends played it for us. We fell in love and decided to make our own interpretation inspired by the song. So, we added two verses and recorded an amazing opera singer for the chorus. The video was shot in Cappadocia, one of the most beautiful places on this planet."

I also asked J. Rock to tell me a little bit about filming their next few music videos in Turkey to which he said, "Right now we are working on three new videos that we shot in Turkey, the first was for Azerix and the other two were for the new album 'Hasan is Loco.' By the way, 'Hasan' in the title of the album also refers to a Turk and our close friend from Mardin. And the last one is for the song 'Gözleme,' which was inspired by the amazing Gözleme!"

I also asked J.Rock what it was like playing in Turkey, to which he said, "For us it is a great pleasure to play here thanks to the amazing crowd and the feeling we get when we are here. The energy in the concerts here in Turkey is crazy. We love it!"

After shows in Fethiye and Izmir last week, Anna RF performed in Konya over the weekend, which intrigued me to ask about what that was like for them. J. Rock tells me that this was actually the second time they have played there. "The first time was very special for us after visiting Mevlana and getting inspired by the greatest Sufi poet, we played a very special concert full of love and a very strong connection. The fan base is growing and the energy is rising. We are so excited and happy to be back for another concert in Konya." The band played at HiçHane, which J. Rock describes as "a very special place with inspiring friends."

I also asked the band where their favorites places to perform in Turkey are to which Or Raveh says Kayaköy Art camp, "It's a place you can do your art and enjoy the best food and landscape." Roy Smila says "Olympos, for it has a unique and amazing combination of mountains and sea." While for J. Rock that place is Cappadocia, "For me it is one of the most special places on this planet. The rocks are so amazing and the landscape is so much more different than anywhere else in the world. If you wake up early you could be surprised to see the sky covered with flying balloons."

I highly recommend you check out Anna RFs positive vibrations and beautiful musical medley from all corners of the world. Trust me, this may very well become the new soundtrack to your life.

Anna RF play in Ankara this Thursday, Oct. 8, at EskiYeni and will perform in Istanbul on Friday, Oct. 9 at the new Dorock in Kadıköy for a Minifest with Turkey's resident reggae rockers Sattas, Komik Günler and Koala.