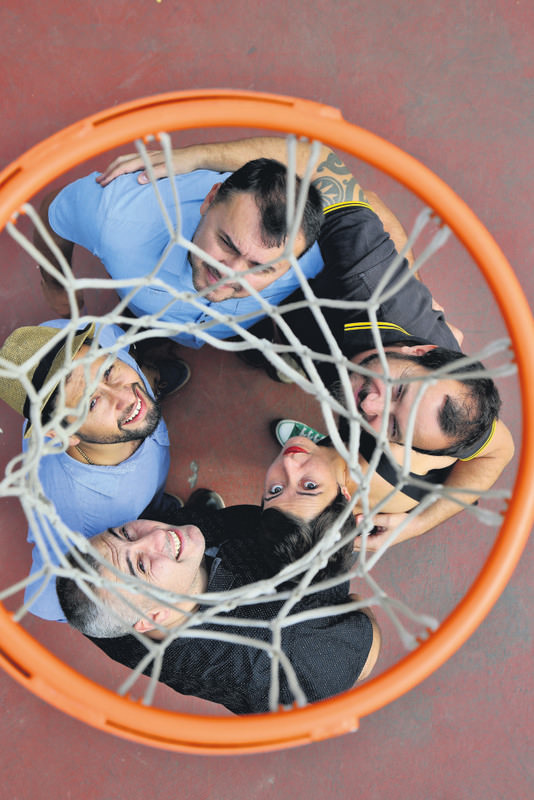 Kolektif Istanbul is a musical collective established by French expat Richard Laniepce, joined by his wife and a number of stellar Turkish musicians, that combines genres with a variety of instruments to bring culture, tradition and joy through their music

Founded by French expat and saxophonist Richard Laniepce, who has been in Istanbul for nearly 15 years, Kolektif Istanbul have just come off their summer tour, which included trips to international destinations, and are working on completing their fourth studio album. Their upbeat, improvisational groovy music, which melds modernity and tradition and the Balkans and Anatolia, is well worth listening to and especially worth experiencing live, where they are also joined by a diverse mix of some of Turkey's best musicians.

They have been on the road and on the stage for a good decade now and have played in venues throughout Turkey as well as countries all over the world from Brazil to Finland, and from the Schleswig - Holstein Music Festival to the Montreux Caz festival. This summer was no different with some of their stops being Munich and Ikaria. But now Laniepce, who plays saxophone and the bagpipes, and his crew of loyal and talented musicians; namely his wife Aslı Doğan on vocals and trumpet, Tamer Karaoğlu on the accordion, Talat Karaoğlu on clarinet, Ediz Hafızoğlu on drums and Ertan Şahin on the tuba, are settling down to wrap up their latest release, which will be out in the upcoming months kicking off with an album launch concert.

I had the opportunity to catch up with Istanbul resident expat musician Laniepce, who hails from France, Lorient to be exact, where he was born in 1971, but has been in Turkey for 15 years now. I asked Laniepce to tell me a little bit about his story. "Both geography and era shape people, of course. My interest in music developed based on traditional cultures. After spending the years of my youth skateboarding and listening to punk, I then became curious about my own Bretagne culture and soon found myself in a wind instrument-making school. After working as a luthier for a short while, the bagpipe became the instrument that influenced me the most and it was through pursuing the tracks of this instrument that I met with world music."

Richard explains that he actually studied classical guitar for two years at a young age at a conservatory, but didn't continue due to his distaste for school, but when he began making instruments he wanted to play again and the bagpipe was what he started with. "It was later when I was introduced to Balkan music that the saxophone came into my life. However, my interest in instruments did not end there," he says, adding that he has a significant wind instrument collection, "In fact; it could even be considered a small-scale museum."

"My life could be described as a journey through music, sometimes I find myself in major concert halls and sometimes in village weddings, but I have always been curious, I still am curious and I listen. What is just as important as music are the life stories behind them, meeting people and sharing your life experiences with them is just as prosperous," he said.

I asked Laniepce how and when he came to Turkey, to which he told me that he originally set out to pursue the bagpipe. "I was interested in what types of music it was played in and as a result was introduced to Balkan music. I first travelled the Balkans and went to Romania, Bulgaria, Bosnia and Macedonia and spent time in each place where I met musicians and learned from them. It was in the continuation of this trip that I found myself in Istanbul in 2001. My intention was to meet new musicians and learn traditional music and that's just what happened. Istanbul, which hosts a variety of cultures, has always also been very generous when it comes to its traditional music. The tulum, zurna, bağlama, clarinet, saxophone and accordions and all the variety of musical traditions… For me Istanbul was a paradise. Eventually we formed Kolektif Istanbul and Istanbul had become my life." Laniepce said he was always moving throughout his childhood and youth and Istanbul has now become the city he has lived in the longest. "In a sense, more than Lorient, Toulouse and Paris, I have become an Istanbullu!"

Asking Richard how he first heard Turkish music, he told me that because of his interest in traditional music, he had a serious archive. "I think the first album I ever heard was Okay Temiz's "Fish Fish Tzigane." The first song I ever heard was "Bir Elmanın Yarısı." We had a group in France called Kocka Neba and played with a Bulgarian accordionist called Ivan Kara who would sing the Türkü "Bir Elmanın Yarısı" and we recorded it there. When I first came to Turkey, I was so proud to know a Turkish song that I would hum it to everyone. However, nobody had ever heard of it. I started asking musicians and collector friends, but no one knew it. Then I met Tamer Karaoğlu, who plays with us now and he said 'of course I know it, my dad would play it at weddings.'"Laniepce explains that there was a time when Turkish music was prohibited in Bulgaria, but wedding musicians would buy tapes from Turkish trucks to expand their repertoires. The song "Bir Elmanın Yarısı" was written by a musician called Mersinli İsmail and "therefore, the song went from Mersin to Bulgaria, from Bulgaria to France and from France back to Istanbul. We loved this story and so decided to record it as our bonus track on the album "Krivoto." It then became more popular than we could have expected and its fame surpassed us when it was used in a television show."

Kolektif Istanbul is now about to release their fourth studio album. Their previous releases are Balkanatolia (2006), Krivoto (2008) and Kerevet (2013). "Each album is quite different from one another. And that's just how we wanted it to be. However, Kolektif Istanbul is a group that lives onstage and we want this album to be just like our stage performances. Our repertoire transforms with time and we wanted to reflect this transition as much as possible. For those who closely follow our stage performances there will be songs they know, there are also brand new ones as well as traditional songs! From a repertoire perspective, this album is definitely the richest and we are really excited," Richard tells me adding that album release dates never go as planned, however they are hopeful for a December release!

You can catch Kolektif Istanbul playing around town and all over the world representing Turkey's vast musical tradition and strong Balkan influence, through the perspective of an expat and his fellow musicians that make truly beautiful music reflecting the spirit of the Istanbul.
RELATED TOPICS