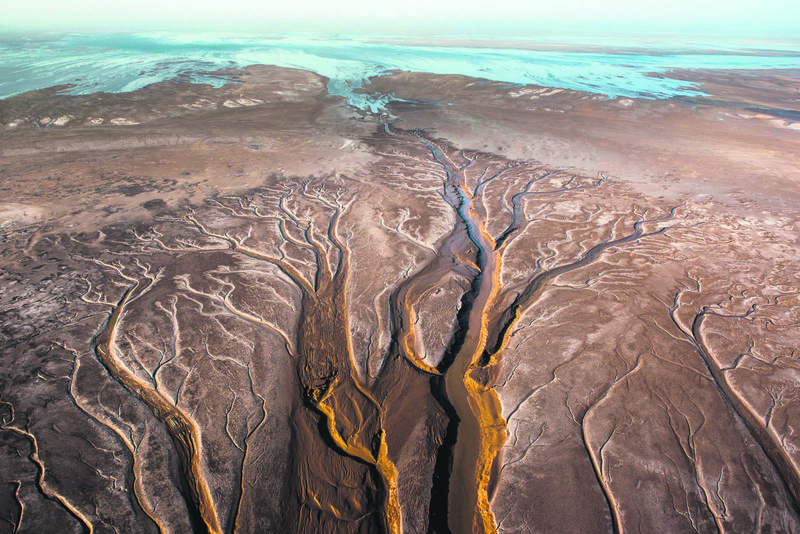 The Sustainable Living Film Festival, held this year from Nov. 19 to Nov. 22, will be showing 30 films from around the world as well as host speakers, music and dance performances with free entry to 20 cities throughout Turkey

Organized by a collective of volunteers all with the aim of increasing awareness of global issues in order to make this world a better place, this year's Sustainable Living Film Festival (Sürdürülebilir Yaşam Film Festivali) is set to be the biggest yet, showing 30 films simultaneously in 20 different cities and districts throughout Turkey as well as hosting speakers, dance and musical performances all for free. Held in three venues in Istanbul from Nov. 19-22, and from Nov. 20-22 in 19 other towns and cities, this very unique festival will be bringing important issues such as climate change, water, energy, agriculture, transportation and the fashion industry to the forefront while introducing some of the country's leading pioneers in the sustainability movement.

"Since 2008, we have been organizing the Sürdürülebilir Yaşam Film Festival as a collective with hundreds of volunteers. We first began organizing film showings, discussion meetings, university seminars and workshops. However, since 2011, we have been solely working on organizing a film festival each year," Tuna tells me.

For the past two years, Tuna has worked closely with Gamze Selçuk and Pinar Öncel, as the core organizers to spread the film festival to a wider geography and audience. Last year the festival took place in 11 different districts and now this year it has grown exponentially to 20 different locations throughout Turkey.

I asked Tuna to tell me his own personal story and how he became drawn to this collective and he told me, "As an industrial product designer I saw the trauma created by the industry on both people and the planet and I did not want to be a part of it.

"Since the 90s, I have decided to devote my time to meaningful purposes and therefore began working in the area of sustainability. At that time, I was especially effected by the wars in the Balkans and seeing the living conditions of those working in the industry in my travels in the country. I began focusing on trying to understand the infrastructure of self-sufficient set-ups and communities and the design of small houses and I also wrote two graduate theses on sustainability at Istanbul Technical University and in Sweden."

I asked Tuna to tell me a little bit about which films stand-out at this year's festival to which he said there were many, depending on areas of interest. "Sand War" and "The Absent House" focus on architecture and the construction industry. "The True Cost" is a 2015 feature length documentary by an American director about the impact of the fashion industry on people and the planet. "H20 MX" a feature length documentary on water issues in Mexico City and "Songs for the Lake" is a 2015 feature-length documentary by a Turkish director about Burdur Lake. Pretty much self-explanatory, "Bikes vs. Cars" is a Swedish feature-length documentary on transportation. There are also a number of films on agricultural issues, such as "Inhabit a Permaculture Perspective," a feature-length documentary that introduces the ecological design process that can shift our effect from destructive to regenerative and "Pun Pun Farm" a 20-minute documentary about an organic farm in Thailand. Also showing will be the feature-length films 'Planet Re-Think," "Planetary" and, "The New Environmentalists," a short narrated by Robert Redford and "The More Beautiful World Hearts Know is Possible," a short of Charles Eisenstein.

In addition to "Songs for the Lake," there are a number of other films on Turkey, such as "The Turtle and the Tourist," on the endangered turtles in Antalya's Çıralı, "Dev Culture" a short about Hidrellez and "The Pain," which discusses the Sakarya and Prosuk lake and the effects of industrialization. All showings in English will have Turkish subtitles and vice versa and those films in other languages will have subtitles in both English and Turkish. The film festival will take place in 20 provinces and districts throughout Turkey, namely: Adana, Ankara, Antalya, Artvin, Balıkesir, Bayındır, Bodrum, Bursa, Çanakkale, Diyarbakır, Eskişehir, Fethiye, Giresun, İstanbul, İzmir, Kayseri, Konya, Mersin, Trabzon and Urla. Nearly every venue will be turning this three-day festival into a full-blown event with line-ups of interesting speakers, musicians and dance performances to add to the roster.

In Istanbul the festival will be held at three different locations: the Şişli Cultural Center and Salt Beyoğlu on the European side of the city and at the Caddebostan Cultural Center (CKM) on the Asian side, and for four full days starting this Thursday , Nov. 19. The showings at the Şişli Cultural Center will be interspersed with talks by a number of directors of the films being showed, such as Şafak Türkel who directed "Songs for the Lake," as well as a talk by Omer Madra, the founder of Açık Radyo and a number of musical performances. Director Şafak Türkel will also be speaking at the Caddebostan Cultural Center, in addition to talks by bicycle activists as well as Özgür Gürbüz from the World Wild Fund for Nature and Mustafa Bakir the founder of the Permaculture Research Institute in Turkey.Not only will entry to all of these activities be free, but many of the 19 other venues throughout Turkey will also be hosting a long list of speakers and performances to the line-up of 30 films. Some of the stand-out locations of this year's festival are Bayındır, a district in Izmir where the film showings will be interspersed by talks from Uygar Özesmi from Change.org, Atilla Uras from UNDP and Mustafa Bakir as well as dance and pantomime shows. Similar programs are scheduled in Urla, Çanakkale, Fethiye, Konya and in practically all of the venues hosting this very important educational and entertaining festival. Check out http://www.surdurulebiliryasam.org for detailed info on programs and the films showing. In addition, anyone who wants to hold a showing of a film themselves, can easily apply to start the process from the website itself.

To check out films from previous years, www.surdurulebiliryasam.tv is a website started up by the Sustainable Living Collective last year, where a number of films showed in the Sustainability Living Film Festivals held since 2008 are available with producers' permission for browsers to peruse, while members can create their own page where they can review and promote films on. Tuna tells me this site also includes videos of ongoing sustainability efforts and is an opportunity for companies, local administrations and educational institutions to explain their projects and the positive contributions they make to the planet.
Last Update: Nov 17, 2015 1:22 am
RELATED TOPICS