The life of an olive from branch to bottle 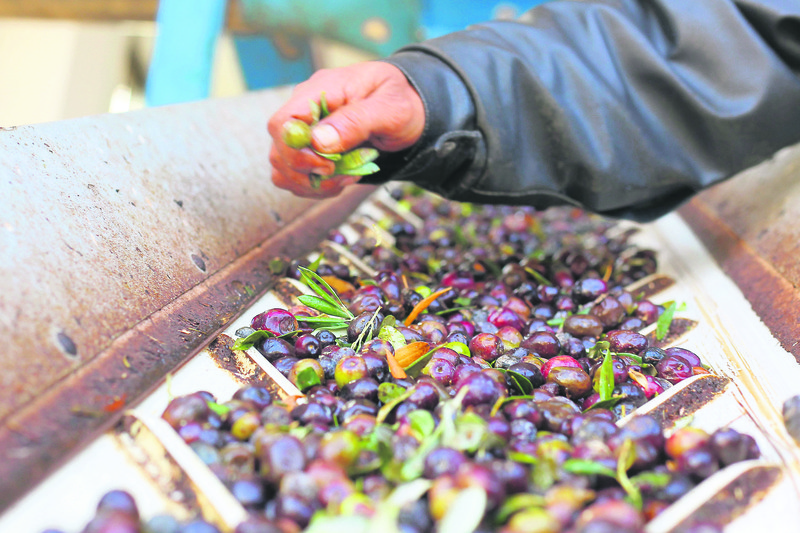 Little may you know if you're an urbanite on your expat adventure in Turkey, but in the Aegean and Mediterranean region olive season is in full swing. Starting in November and through to February, villagers and town locals will be spending the days picking olives and then taking them to be pressed at local olive oil factories. This olive oil is then used amongst friends and family members or becomes the olive oil we purchase at markets and specialty stores. But how it gets from the branch to the bottle is what I wanted to learn - and I just happen to be living in one of the most fruitful olive growing regions in Turkey, the magnificent Mount Ida.

Picking, pressing and preserving olives has been in practice for thousands of years. Olive trees have covered the outskirts of the Kazdağları from Çanakkale to Balıkesir, İzmir, Muğla and all the way to Antalya and is still very much a way of life for the locals who reside in these parts. Starting in November, but hitting full force after the first rain around mid-December, relatives, neighbors and friends come together to spend the good weather days out on their fields collecting olives. Locals will also work for a daily wage to collect for those unable to pick the fruit from their own fields. Many villages will also hold tenders where bidders vie to pick from others' trees. Others may straight up rent plots to pick the olives from landowners. Regardless the method is pretty much the same, lay out a tarp and using a special stick, or if lucky a vibrating machine, the olives are felled from their trees.

These olives are then picked through for the greenest or the largest, depending on the timing as olives start out green on the vine and then take on rosy and purple hues and increasingly darken. If you were to taste an olive straight from the branch, they are surprisingly bitter, which is testament to the careful processes involved in transforming that olive into the "sofralık," or "table olives." For prepared olives they are cleaned and placed into water with salt, referred to as "salamura," or plain water, and green olives are sometimes preserved being crushed with a wooden mallet and kept in water for months.

There are actually three categories of olives picked, the first being the aforementioned table olives, the second being olives to be pressed as olive oil and the third called "dip" or "ground" olives and refer to those that have fallen off the branch themselves, possibly due to harsh weather. The latter category is also pressed and can be used for soaps, cosmetics or industrial oil. While the preparation of a table olive can take months to acquire its optimal taste, for olive oil the faster it is picked and pressed, the better. Therefore, after spending a day picking and picnicking in the fields, then comes the task of taking said olives to the factory to be pressed and there are many types in which to do so.

There are a wide variety of factories in which to press said oil, however expediency can be important as ideally every night after picking hundreds of kilos, the olives are taken to the factory to be pressed. There are a wide variety of presses used as well, spanning from the traditional stone cold presses that are best in preserving the olive's integrity and nutrients, versus the more efficient and modern Kontini system.

All processing involves crushing or pressing the olives into an olive paste that is then churned and separated from its water. Extra virgin olive oil, or "Naturel Sızma Zeytinyağı," refers to the first pressing and is one of the highest qualities of olive oil. Virgin in itself means the oil was produced using only mechanical means and no chemicals added, however extra virgin tends to have a lower acid content. From there on, olive oil grades become lesser and are instead used for products such as cosmetics, soaps and industrial oil.

In Turkey, there is a concept called the "var yılı ve yok yılı," in other words the "on year and the off year," and it is said that one-year olives may be in abundance, but then the next year the yield will be smaller. This doesn't exist in countries such as Spain where trees are now hybrids. But in Turkey, the trees being picked from have most likely been there for thousands of years. The cultivation comes in its pruning, "a delicate dance" as one olive oil producer told me, because once you start pruning an olive tree you have to prune forever and that is done each year in spring to ensure the greatest yield in fall and winter. In addition, each olive is different, however in general to produce one liter of olive oil anywhere between four to seven kilograms of olives need to be pressed. That's a lot of picking!

Homer called it liquid gold, Hippocrates made it medicine and the Vatican would import their olive oil from Turkey's prestigious Aegean region. Ayvalık is revered for its olives, but the whole Mount Ida region is also prime olive territory. If in the neighborhood of Küçükkuyu in Çanakkale, visit the Adatepe Olive Oil Museum, the first of its kind in Turkey that is housed in an old olive soap factory. The history and devices used throughout on beautiful display make this an excellent stop, while there is also an impressive gift shop with olive oil, carved olive wood items and cosmetics and the Buğday Association for supporting ecological living also has a shop where they serve eco-minded products and organic snacks.

Up the road is Adatepe village, a once stone house ghost town that has become a stunning stop to experience these impressive buildings being given a new life. There, visit the Hüseyin Meral Olive Oil and Arts Museum. This well-informed world traveler has a wealth of knowledge on olive oil production and sells his own series which is an even higher grade than extra virgin olive oil and is referred to as "Zeytin Sütü" or "Flower of the Olive" oil in France and is obtained by stone ground olives without using any pressure at all. At the showroom, which also houses an art collection, you can see replicas of the traditional presses used over 2,000 years ago as well as more modern versions of presses used in the 19th century.

To visit a full-on cold-press and organic olive factory and enjoy the delicacies prepared with this precious olive oil, head to Laleli in Burhaniye, a family operation that has won multiple awards and produces olive oil, soaps, cosmetics and even vinegars. Open from 8:00 am to 5:00 pm, this is an excellent stop to dine, shop and see the process of transforming an olive into olive oil for yourself.
RELATED TOPICS