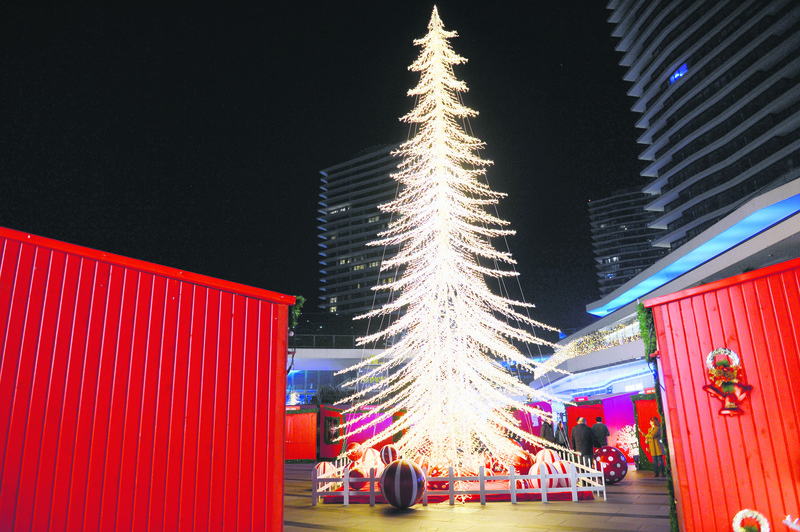 The New Year along with its promise of a fresh start holds much significance for many cultures, especially Turkish culture. Although relative newcomers to the game, there are still a number of traditions and superstitions surrounding the start of a new year that are unique to Turkey.

It was not until 1926 when Turkey adopted the Gregorian calendar that Dec. 31 gained significance as being the last day of the year. In 1935, Parliament made Jan. 1, "New Year's Day," an official holiday; hence, the popularity of celebrating New Year's Eve on Dec. 31 was born. Parallel to the commercialization of Christmas in the Western world, Turks and especially urbanites have embraced New Year's Eve as a holiday to decorate with trees and lights, exchange gifts, watch fireworks and celebrate in grandiose style.

In Turkey, New Year's Eve is celebrated more visually in big cities with street decorations similar to Christmas, Santa Claus imagery and trees adorned with fairy lights and gift exchanging among family and friends. Although Christmas may have come and gone, do not be surprised if you receive gifts on New Year's Eve. I would also highly advise to be prepared to reciprocate.

A very special and hefty New Year's Eve Milli Piyango lottery drawing is broadcasted on the TV just before midnight. Moreover, buying a ticket has certainly become a steadfast tradition and is the perfect present, as the grand prize is TL 55 million ($18.8 million).

All over the country, the evening traditionally starts with a big family dinner. Serving a roasted turkey is becoming increasingly popular, and the Turks have their own style of stuffing the bird with currants, pine nuts and rice. Variety programs have a wealthy lineup, start early in the evening and run until the wee hours of the night. A new TV tradition is to watch famous personalities compete on "O Ses Turkiye," Turkey's version of "The Voice," on TV8. Kanal D will have Bülent Ersoy ringing in the New Year on their improvisational show "Arkadaşım Hoşgeldin." While ATV and Fox will have special episodes of TV series featuring singers ringing in the New Year, TRT, Show TV and even NTV will have a long lineup of performers and personalities to entertain until the countdown.

The Turks also countdown the clock and at the stroke of midnight, Turkey and especially Istanbul becomes alight with fireworks. A spectacular show is set off from the Bosporus Bridge, making neighborhoods such as Ortaköy and Bebek in high demand for its proximity; thus, they take on the atmosphere of a street party. Any sort of popular strolling neighborhoods such as Nişantaşı, Kadıköy, Bağdat Caddesi and of course Taksim can be completely overrun by the crowds and resulting traffic. Be forewarned, parking will be nonexistent, public transportation will be crowded and taxis nearly impossible to find on the night. So, be safe and start out early so you do not end up spending New Year's Eve in traffic - an experience I would wager that like me, many expats have endured in their time in Turkey. Therefore, the most popular way to spend New Year's Eve out in the city is to attend a pre-planned event. Hotels such as the Hilton and the Conrad will be hosting Turkish pop stars, while nearly every restaurant in town will have a special menu planned and reservations required. You will want to try to get tickets early because they certainly can sell out on the night.

Some of the most popular venues hosting New Year's Eve dinner and dancing for expats are the new and impressive Babylon Bomonti, which will be hosting an "Oldies but Goodies" night with hits from the '80s and '90s. The Hard Rock Cafe off İstiklal Avenue is also hosting a special rockin' New Year's Eve night with DJ Nikki Wild, live music by Karma Band and a four-course dinner. Mama Shelter is also hosting a delicious dinner and funky DJ beats by Yang and Pineapple Pop.

For a stunning venue and meal to match it, the regal Konsolos Istanbul in Pera will be hosting a six-course dinner, and for a more laidback vibe in nature on the outskirts of the city, the Tuzla Yacht Club will be holding a special dinner with DJs in their bohemian-romantic garden.

Zuma and its fancy dinner offerings in Ortaköy is the place to go to be seen and see the view of the fireworks show off the Bosporus Bridge, while Suada Club, the man-made island in the center of the Bosporus, will have the best views in town and will host the popular Turkish rock group MFÖ. The only way to beat these views would be aboard a boat, and there are many New Year's Eve boat parties to choose from. Gezi Makinesi, The Best Party Life and the Erasmus Student Network are all hosting parties promising to be packed and high-energy on the eve.

It should come as no surprise that the Turks have imparted their own special traditions for the night, marking the start of the New Year. You may have noticed the wide array of red panties that are suddenly everywhere. Do not be offended if you happen to receive a pair as a gift because it is considered good luck to don a pair of red underwear at the stroke of midnight for a fruitful and promising new year.

Another tradition involves smashing a pomegranate on your front door at the midnight mark, or there is the less messy option of sprinkling salt on your doorstep - all in an effort to usher in prosperity and good fortune for the year to follow. Opening the faucet at midnight and letting the water run is also believed to bring good abundance and good fortune. To bring more money into your life, you are supposed to unlock a padlock at the stroke of midnight. And if it is travel that you seek, take a short stroll at midnight, as it is believed this will bring journeys into your life.