A new generation of backpackers mobilized for a good cause 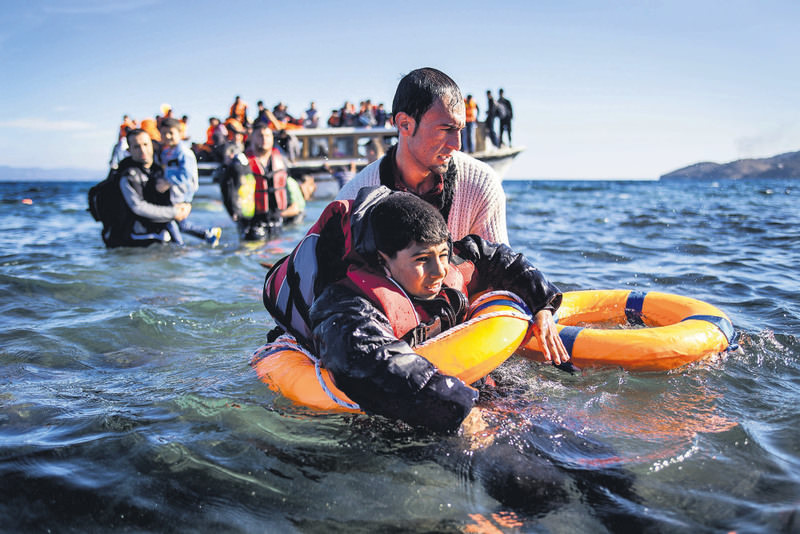 I recently had the opportunity to host two volunteers/world travelers who dedicate their time amid their 20-something lives of school and work to help out on the shores of Lesbos. As the Greek island is situated off of Turkey's Aegean coast, Lesbos has taken the brunt of refugee arrivals taking the short but treacherous journey into what they hope will be their gateway to Europe and a fresh start.

This year saw 1 million refugees make their way to Europe with nearly half of that figure entering through Lesbos, which only has a local population of 86,000. Although there has been a major drop in dinghies departing, a 35 percent decrease was witnessed since the start of the year, according to the United Nations refugee agency. It still means that around 20,000 to 30,000 tested the waters this month alone. In addition, a new wave of overloaded larger wooden boats poses a new threat to those seeking asylum.On the Turkish side, security is tight. And although I reside in a region where a majority of boats supposedly take off from, life for us is business as usual. Moreover, any evidence of refugees staying in the area is nearly nonexistent, with the exception of strewn clothes on the beaches and the building of an impressive housing development for refugees in Ayvacık. The Coast Guard and gendarmerie have devoted all of their efforts to rescuing and keeping these desperate refugees safe. The government takes care of all of their needs on this side, and Turkey is well-versed on handling these sorts of humanitarian crises - after all, they host the world's largest refugee population of 2.2 million and counting.

In Turkey, most nongovernmental organizations (NGOs) are based in Istanbul and other cities housing refugees such as Gaziantep, and the expat community has also taken an active role in providing educational spaces to help Syrian refugees more easily integrate into life in Turkey. However, on the other side of the Aegean Sea, there is a whole wave of international volunteers that devote their days to assisting refugees' arrivals, providing medical response and facilitating transportation for their registration. On an island that had just two operating ambulances when the crisis escalated, the publishing of Aylan Kurdi's lifeless body on a Bodrum beach drew in an outpouring of good-willed youth who came to the Lesbos coast to help.

The two volunteers I mentioned who were fresh off the island were a photojournalist from the United States and an Erasmus student in Turkey from Spain. My compatriot had come to see the gravesite of a child from a family she accompanied on their journey to Germany, while the latter had decided to pay a visit to his brother who had been volunteering for months in Lesbos. His brother was instrumental in the founding of the Lighthouse Camp - one of the many makeshift efforts in this overly affected area of the Greek Isles, where popular tourist destinations such as Molyvos and Skala Skamias, once known for their beautiful beaches, are now a gathering place for volunteers from around the world who have transformed the region into a humanitarian crisis center.

According to The Guardian, there were 81 NGOs on the island just last month, many of which are unregistered making the situation slightly more chaotic. There are now so many skilled helpers greeting the boats that not just anyone goes out into the sea when boats go down. There is a well-oiled rotation of shifts of volunteers based on skill sets, including rescue teams on rigid-hulled inflatable boats, watchtowers set up with night vision and medical teams providing triage. The distribution of warm clothes and food are just par for the course. Camps, such as The Lighthouse, which was described by my journalist guest as "basically a humanitarian relief camp set up by a bunch of 20-somethings," provide basic amenities and are run by a rotation of volunteers.

It used to be that there was just one family on the shores of Molyvos - a British couple and their daughter living on the island and running a hand-made olive wood carving shop - who would greet boats and provide first-aid, food and warm clothes before the refugees had to make the 40 kilometer or so walk to register. However, their work and their tourist season was overwhelmed this summer by volunteers and refugees, and Philippa and Eric Kempson have not had the time to whittle away - literally. Instead, their days are filled with the 2,000 or so arrivals that continued in the winter months and the young international community that has come out to assist them. When I last caught up with this fellow expat couple on the opposite shore of the Aegean that divides us, they were having a difficult time balancing the act of helping refugees and being under the gun by frustrated locals. But the situation seems to have changed dramatically in just a few short months - as Philippa tells me that the locals have also softened their stance with the arrival of all of the international volunteers - and "after seeing what happened this summer, they now realize that something needs to be done," she said.

This local support has led to the couple, joined by a group of international volunteers who share the same vision, renting out an old hotel they plan to use as a first reception emergency center to offer new arrivals warm clothes, food, heating, and if possible, a little space to relax in as a family. "We want to give the refugees a dignified reception," Philippa explained, because it may just be hours before they have to set out on the road again, as the final destination for many are countries such as Germany. "We hope for this to be a place where all NGOs can volunteer or be a part of it," Philippa said. You can check out The Hope Centre and Elpis Facebook pages for more info.

"We have some amazing groups on the ground, and they are all working together on the beaches. Just last week, there were 28 boats that arrived before lunchtime," Philippa said. It is a fine line that these volunteers tread, however, as just last Thursday, three Spanish nationals and two Danes were arrested for allegedly setting off in a rescue vessel to assist migrant boats in Turkish waters without clearance from the Greek coast guard. "It is difficult, because many of these groups are not licensed to be here but we really need them. They need to know that the coast guard must be the one in charge in the water. But sometimes lines are crossed, and they go too far," Philippa explained, adding that the groups on the water are really professional and follow the rules the coast guard lays out." But, it is a tricky situation when it comes to so much tragedy. Philippa describes the month of October as when they saw a peak in crossings at 12,000 in a single day. On another day, her husband had to assist with eight nonresponsive babies. On an even direr note, NGOs have also helped organize additional burial sites on the island.

I also asked how many volunteers were visibly around on the coast. Philippa and Eric said there were maybe 200 volunteers at any given time. Although the numbers of crossings have dropped dramatically and organization on the island has vastly improved, for Philippa the refugee crisis "has become our way of life."
RELATED TOPICS